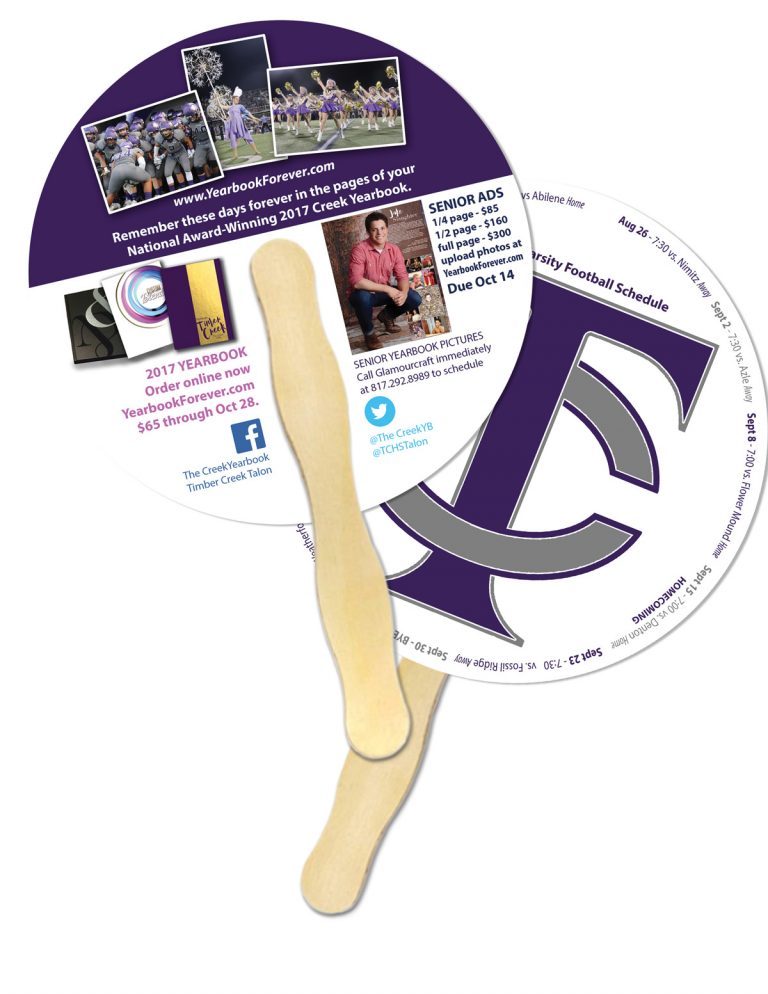 High school football is big in Texas, and the yearbook staff at Timber Creek High School in Fort Worth used a fun, clever idea to spread awareness of their yearbook sales this season.

The staff created fans to hand out to the spectators at the first game of the season, while it was still hot out. The fans had order information and dates on one side, and a school logo and football schedule on the other. Not only were they designed to get the word out about book and ad sales, but also to show team spirit and be waved during the games.

“I got the idea for the fans last spring while attending a music festival in a neighboring town,” said Kathy Beers, Timber Creek’s yearbook adviser. “The parks department was handing out fans with the city logo on one side, and a list of all the upcoming spring and summer events on the back. It was great branding. Everyone was walking around with them.”

Beers said on the opening football weekend, Timber Creek sold four times as many yearbooks, and six times as many ads, compared to the same weekend the previous year.

After giving out 300 fans at the season opener, Timber Creek created another set for their “Gold Out” rivalry game in September with Fossil Ridge High School, another Walsworth Yearbooks school. This time, the fans were handed out to the crowds from both schools with the helmet logos of both schools included and messaging to raise awareness for St. Jude’s Children’s Hospital.

The schools advertised they would donate $5 for each yearbook or ad sold the weekend of the game. They were able to successfully raise $300 for St. Jude’s.

“It was great to bring schools together for a good cause and to get some yearbooks sold at the same time,” said Beers.