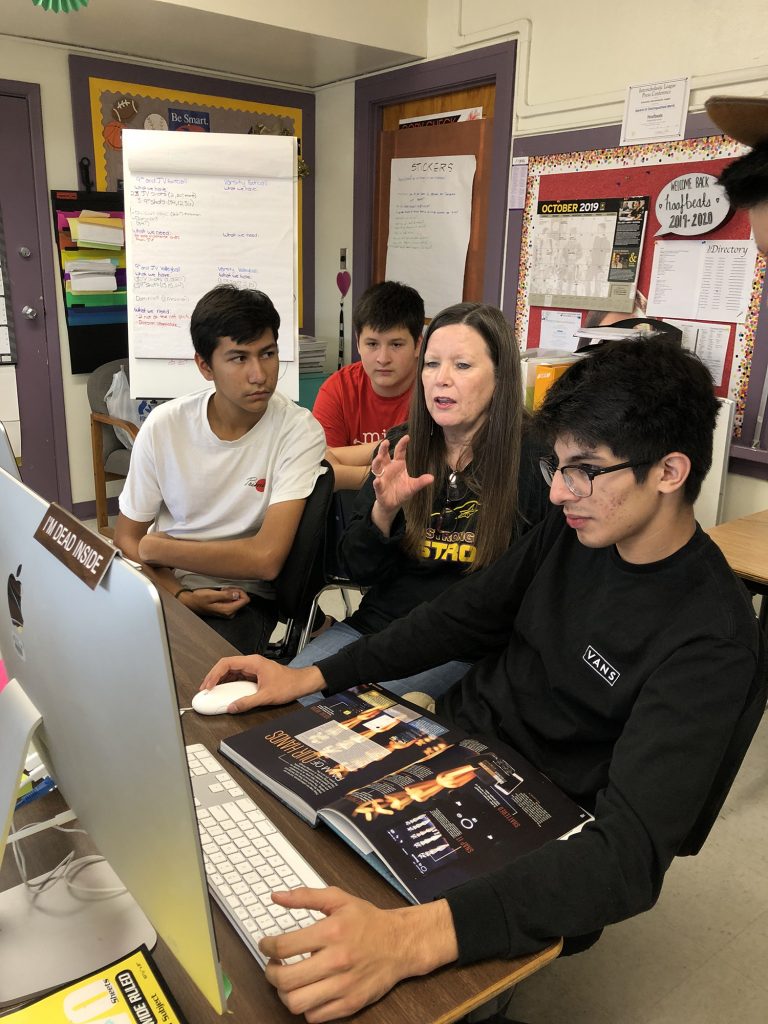 Pat Monroe has been an adviser at Burges High School in El Paso, Texas, for 29 years. During that time, her staffs have won many awards for their yearbook. Monroe is this month’s Adviser of Note. You can learn more about her story in her podcast interview on Yearbook Chat with Jim. Find it at walsworthyearbooks.com/podcasts or wherever you get your podcasts.

High school attended: Andress High School, El Paso, Texas
College Attended: University of Texas, El Paso, Texas
Did you participate in journalism in high school? I was a reporter for both the school newspaper and yearbook. I was sports editor of the yearbook my junior year. I was co-editor for the yearbook my senior year.
Did you participate in journalism in college? I read (it was “rip and read” live) the news for the college radio station during my first year of college and worked for the university newspaper.
Were you ever a professional journalist? I worked at the CBS affiliate in El Paso for 10 years. I began as a teleprompter runner and continued working hard to make it as a reporter. I also had the opportunity of working as an assignment editor, video editor and eventually fulfilled my goal to become producer for the 10 p.m. newscast.
Share some of your best experiences as a professional journalist. There are so many wonderful experiences in terms of learning and improving in my profession. I had the opportunity to meet and interview famous athletes, entertainers, politicians and local prominent people. However, I most enjoyed meeting everyday people who had a story to tell. What a privilege it was to tell their stories.
Size of your book: 8
Number of pages in your 2019 book: 224
Student population: 1,496
Number of yearbooks sold in 2019: 300
Awards for the 2018 book: CSPA Silver Crown, NSPA Pacemaker Finalist, UIL-ILPC Silver Star
Number of books you have advised at Burges, including the 2020? 29
Number of books you have advised in Texas? 29
Other schools you have taught and/or advised at? None. My whole teaching career has been at Burges.
Other classes you teach at Burges: Journalism 1A & 1B. All levels of yearbook production. I used to teach all levels of Newspaper Production and Literary Magazine. In my first three years of teaching, I had to teach freshman English, including a High Intensity Language Training class for students whose first language wasn’t English.

How did you first get involved with scholastic journalism?

I went from a newsroom to a classroom and just dove in. Since then, I have learned something every year I have been an adviser.

How and why did you decide to go into teaching? Advising?

I decided I was done with television. While attending college, I substituted for extra income. I took every assignment that came up, no matter the school. I discovered I really liked Burges the best. I gave my two weeks notice at the TV station with no job in my future. Then, one day after I had given my notice, I got a call from Burges. The principal asked me if I’d be interested in taking the journalism job. I couldn’t believe it. The job just fell into my lap. The rest is history.

What was the most difficult part of your first year advising?

I walked into the room (1990) and saw three computers. I had no idea how they worked and was at the mercy of the students. However, they didn’t really know how to use them either. We didn’t even know how to change the font or point size. You should see my first newspaper. The font was large and ugly. For some strange reason, it’s still dear to me. Yearbook was pretty fun because I had no idea what I was doing. Some of my colleagues in the district were helpful and always offered assistance, which I took advantage of.

What made you want to come back for year two?

Honestly, it was my only way to pay the bills. I was working on my emergency certification and had three years to earn it. Taking those classes and trying to get three publications done on schedule was tough. We also put together a 100-plus page literary magazine. 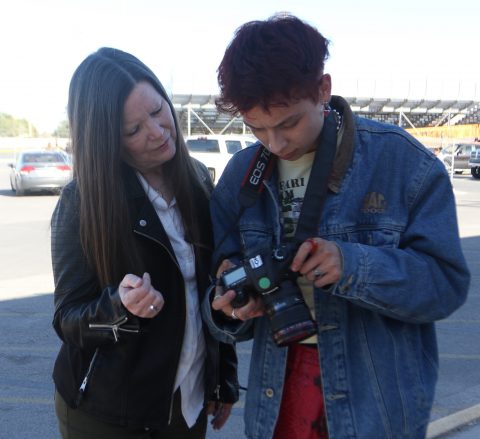 I’d tell him/her to never hesitate to ask for help. I would encourage him/her to seek out journalism organizations, which can also be helpful. I spent way too many hours with the publications and, quite honestly, often missed family moments like parties and other milestones. I would encourage a first-year adviser to never put the publication before family. That’s probably the one area I regret.

Over the years, what have you enjoyed most about advising a yearbook?

What I love about my job is seeing students walk in and know nothing about putting a publication together. Most stay all four years, so I have the pleasure of watching them grow as a photographer, writer, designer or editor. But, I get the most joy watching them grow as a people. They’re confident, aware of their talents and abilities. They develop an understanding the importance a work ethic, how important teamwork is and how to treat others who were once in their place. They become more aware of their community and school. My students blow my mind with their talent. I love them. I also love the fact that I have also built lasting relationships with many of them. I have attended their weddings, baby showers and college graduations. In fact, one of my former students was a bridesmaid in my recent wedding. The relationships are precious and have made me a better teacher and person.

What has been your biggest challenge as an adviser?

My biggest challenge is keeping up with technology. I am no tech guru. Luckily, my students are so patient with me and figure out most problems in that area. I still struggle with juggling spending my time with the publications and personal time. In recent years, I also struggle with numbers. With so many academic programs making their way into the district, it’s an uphill battle to attract students into such a time-consuming elective and keep them when they have demanding academic schedules.

What in your life as an adviser has made you proud?

There are so many moments, it’s difficult to choose. I remember hearing that one of my former students was awarded the Pulitzer Prize (for breaking news). She was working for the Los Angeles Times and was part of a team of reporters who covered the San Bernardino shootings. She also won a second Pulitzer Prize as an editor on “The Wall.” Another proud moment was seeing her speak at one of the NSPA-JEA conventions.

Like many advisers, I am always proud when the students’ work is recognized on the national level with “Best of Show,” Crowns and Pacemakers, and on the state level with Stars. I’m also proud when peers approach me about my students’ behavior and desire to learn when we attend workshops and conventions.