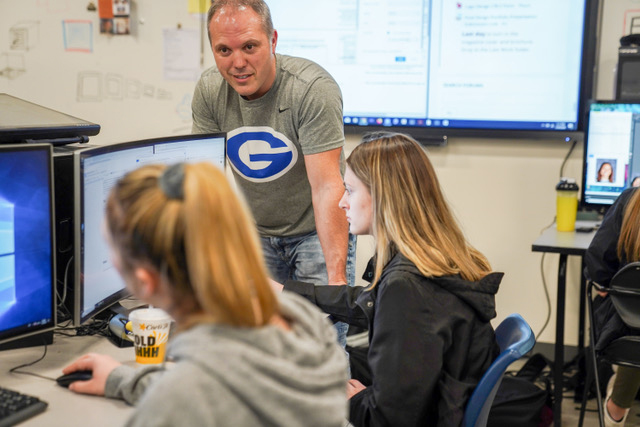 From his career at Nike to an award-winning yearbook adviser, Brad Cook has had a fascinating career. He is currently advising his 14th yearbook at Gresham High School in Gresham, Oregon. He took the time to share the insights he’s gained over the years with Jim Jordan. You can learn more about Cook by listen to his interview on the Yearbook Chat with Jim podcast.

Did you participate in journalism in high school? No
Did you participate in journalism in college? No
What were you doing before you became a teacher and a yearbook adviser? After graduation from Oregon State, I was accepted to a very prestigious internship at Nike. Only thirty graduates from around the country were accepted – this was in all areas of the company. I was one of six designers admitted to the program. At the conclusion of the two-month internship, I was hired as a designer. After an amazing experience working in the Image Design and the Sales Tools departments, I took the risk to leave and be the lead designer at a firm in Portland. The opportunity to work through the entire design process, brainstorming to press, was something I had always wanted to do.
Size of your book: 8
Number of pages in your book in 2019: 206
Number of pages in your book in 2020: 206 . . . maybe more, maybe less
Student population at Gresham High School: 1470
Number sold in 2019: 500
Awards for the 2019 book: NSPA Pacemaker Finalist
Number of books you have advised at Gresham, including the 2020: 14
Other schools you have taught and/or advised at: 0
Other classes you teach at Gresham:  Graphic Design 1/2/3/4, Photography, Production Photography, Yearbook, Design Studio.

What other activities are you involved in?

How and why did you first get involved with scholastic journalism?

When asked to take on the course, I said yes. I am known as someone who really doesn’t say no. You might say it gets me in trouble with my wife sometimes. However, over the years she has learned to just go with it.

How did you become interested in graphic arts? Were you trained? Were you ever a professional graphic artist?

I have always enjoyed the creative process. My entire family is very creative. In high school I took five credits of art courses. I also took five credits of science. My love for science and problem solving took me to Oregon State University to pursue a degree in sports medicine. But after the first two trimesters, I realized I wasn’t enjoying the content as much as I thought I would. It was then I made the switch to focus on graphic design.

How and why did you decide to go into teaching? advising?

I was working as the lead designer at Electro Art in Downtown Portland. Unfortunately, a little over a year after being hired, the design world was rocked by the effects of September 11. I was laid off for financial reasons.

Luckily, at that time I was coaching wrestling at Gresham High School. And after hearing of my situation, the head coach, Randy Williams, suggested that I should become a teacher. Having attended Gresham as a student, the veteran staff knew me very well. The vice principal, Carol Daiberl, said if I got my teaching degree they would work to create a position with me in mind. It didn’t take long to commit to going back to school. While taking courses for my M.A.T., the Gresham-Barlow School district hired me as a Network Technician within the district. And then shortly after that, I was able to student teach at Gresham during a portion of my student teaching requirements, which I loved.

After graduation, I applied to all the local school districts. I had my certifications to teach math and art at the middle school and high school levels, and I was willing to teach anywhere. I just really needed to get working again. I fortunately got interviewed for an Algebra teaching position at Clear Creek MS in the GBSD.  Although I was excited about the opportunity to possibly work in the GBSD, I have to admit I was really disappointed that I didn’t even get called to interview for the math/graphic design teaching position I had applied for at Gresham HS. 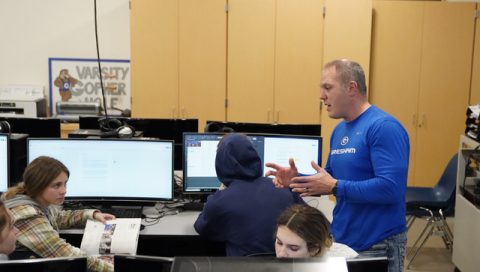 But then one day soon after my interview at Clear Creek, I was painting a mural at Gresham HS when Randy Williams came down to interrogate me on why I was interviewing for a position at Clear Creek, and why they were inquiring on my student teaching references. My response to him was simply that I needed a job. He definitely didn’t like that response, because he literally grabbed me and dragged me down to the principal’s office. As soon as I walked into the office, the principal asked me if I wanted to work at Gresham. Without hesitation, I responded with an “of course.”  He shook my hand and introduced me to my department head and I’ve been teaching at Gresham ever since.

So then three years later, while out with staff after graduation, the new principal, Carol Daiberl, who was the individual who had originally designed my teaching position with me in mind, leaned over and asked me if I wanted to take over the yearbook. Unsure of what I was getting into but receiving some very positive encouragement by some close friends on the staff,  I smiled and semi-reluctantly said OK.

What was the most difficult part of your first year advising?

To be honest, in the first year the course wasn’t even a real priority for me. I was coaching three sports and carrying five preps. Additionally, I inherited a program with just two returning students. Looking back, I can say that maybe that’s not that uncommon, as I’ve had to deal with inexperienced staff a few times over the past 14 years. But it’s definitely a lot easier to manage now when I actually know where I am going and the direction I need to guide the new staff members in. But even still, I guess that year was really unique because, to top it off, I had recruited 18 designers and only one writer and my editor in chief wasn’t even in my class.  She was a full IB diploma student so she had to come in outside of class after school to help whenever she could. The one nice thing that year though was that Gresham had always been a fall delivery book and I stayed with that my first couple years so I didn’t feel the pressure of the deadlines. And honestly, I don’t think we ever hit a deadline that year. I think we probably turned in our cover in May.

What made you want to come back for year two?

There never was a thought not to. I made the decision to take four students to the Walsworth Summer Workshop in Tacoma, Washington. The keynote speakers were Crystal Kazmierski, Susan Massy and Jim Jordan. Their passion for yearbook was very eye opening. And I just saw it as a challenge to learn more about the process and to find a way to make a better product.

Embrace the process. Don’t stress over the little things. Get through it. And take your kids to a workshop. That being said, I would like to be able to say that each issue gets a little easier. But it won’t, because your standards and expectations will just keep moving higher. But just know that’s part of the process.

What were some of the factors that have led to your success as an adviser?

What has been your biggest challenge as an adviser?

Gresham is an IB school. Which has meant that if I am graced with a high-level student or a student who has the potential to be one of those students that 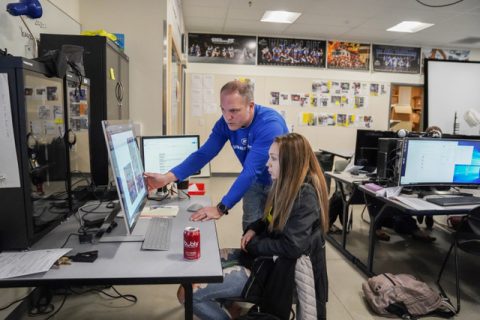 can carry a staff who might be interested in joining the staff, they usually don’t have room in their schedule. Additionally, district-required courses for students throughout their four years has created many student scheduling issues. Gresham also operates in a seven-period day schedule which doesn’t provide very many opportunities for students to enroll in yearlong courses.  Even as successful as Gresham’s yearbook has been, the inability for students to take the course for multiple years sets the staff behind the eight-ball year in and year out.

Tell me about something in your life as an adviser that has made you proud.

In 2016, a few of my editors recommended me for the Mary Hartman Oregon Journalism Teacher of the Year award. Our publication representative from Walsworth, Matt Holmes, attended a school wide academic awards assembly where students were being recognized from all academic subjects. Matt came to the podium and asked my editors and I to come to the center of the gym. He then recognized our staff with a plaque for being recognized in the Walsworth Gallery of Excellence. He then pulled out another plaque and begun speaking about what my students said about me as their teacher, coach, and adviser and presented me as the recipient of the award. I was so taken aback I didn’t know what to say. It is not every day that a teacher hears the positive words students share with others about them.

Tell a story about a moment in your career as adviser that you will never forget.

There are quite a few. More recently, in the fall of 2018, I began teaching in a temporary classroom that was created in the corner of the library due to construction for our new school building. Following losing a handful of seniors the year before, we had returned only two staff members. Remarkably, they were two male editors, Tyler Budge, the Editor in Chief, and Design Editor Conner Henkle. Thankfully, both of them had experienced the process and commitment needed the previous year. Tyler, Connor and I worked diligently to see that the 13 new staff members began to digest the process and expectations I had for the staff early on.

One evening I treated the staff to Subway and Dutch while we watched the Blazers play the Nuggets in the NBA Playoffs. The nearly 15-foot picture of the game was projected up on the wall with the lights off. The camaraderie of the staff, leadership of Tyler and Connor, and watching them question one another and assist the staff members in all the things I asked from them, made me so proud. Not to mention, the Blazers ended up winning the game in four overtimes. The pictures and video of my students watching the final moments are priceless. I don’t think that group will ever forget that night as well.