Mansfield Legacy photogs thrive on the sidelines, among the professionals February 7, 2018 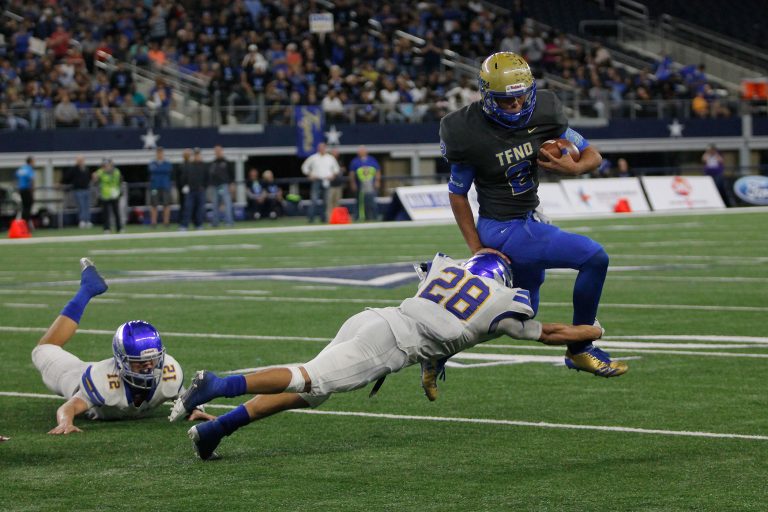 Mansfield Legacy photogs thrive on the sidelines, among the professionals

This past December, as teams from across the state competed for the championship title, six students from Mansfield Legacy High School in Mansfield, Texas, stood shoulder to shoulder with professional photographers, capturing the games from the sidelines.

“Actually being on the field and photographing the state championship games, being next to the professionals, was just awesome,” said senior Tori Greene. “You had the same credentials, you’re not ‘less than’ them. It was really awesome.” 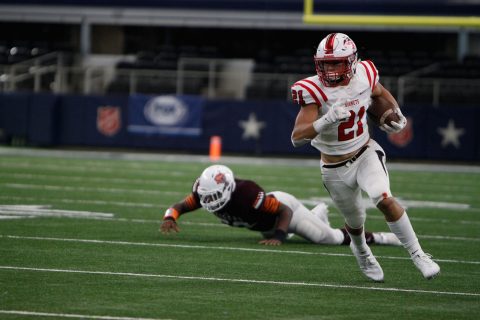 “I kind of followed in her footsteps. I took her camera and I’d play around with it. We’d go out together and shoot just for fun,” said Miller.

Greene was honored and inspired by the invitation.

“It made me want to do better. It made me better myself,” she said.

Greene, Mix and Miller all said they enjoy sports photography. Actions shots are one of Greene’s favorite subjects to photograph.

“There’s so much happening — it’s more exciting, you get more raw emotion,” she said.

Mix loves going to the games.

“As a photographer, you get in free. You get to do things most people don’t get to do. You get to be on the court, on the field or whatever it is,” Mix said. “You see things from a different perspective than the fans do.”

The group learned they’d be photographing the championships a few weeks ahead of time. They prepared by studying photos from other UIL events and reviewing their own sports photography.

“When I first got there, it was kind of weird. I had credentials – which I’ve never had before – at the Cowboys stadium. I was able to go up in the press box and meet tons of people,” said Mix. “The greatest feeling I had was when I walked down onto the field, because I’ve never been on a professional football field. And that was an amazing feeling. I loved being there.”

Each student signed up to work games during the three-day tournament in Arlington, Texas – about a 30-minute drive from Mansfield Legacy.

Walking through the stadium tunnels and rubbing shoulders with professional photographers, UIL officials and people who run Dallas Cowboys games was almost intimidating for Miller, but he ultimately found it to be inspiring. His best moment happened when he was walking down to the field, and had to stop and ask a security guard where to find the stadium entrance.

“I’ll never forget. He just kind of smiled at me and did a little laugh and was like, ‘Oh, yeah, you just go down this hall and turn to the right.’ And he said the door was automatic. I thought that was kind of weird. So sure enough, I walk down the hall and it’s this big garage door,” said Miller. “So I just walked fully up to it and it came up with a big roar. I just looked at the field and everybody was playing football and here I am standing, little me, in this huge open door. That’s where the teams run out and that’s where I am. It’s the best place I can get.”

Some of the routine was similar to that at regular Mansfield Legacy games – take great photos, try to anticipate and capture great moments.

“I took a deep breath and started doing what I always do: looking around, trying to find those key players and the key moments. Trying to figure out where to stand,” said Miller. 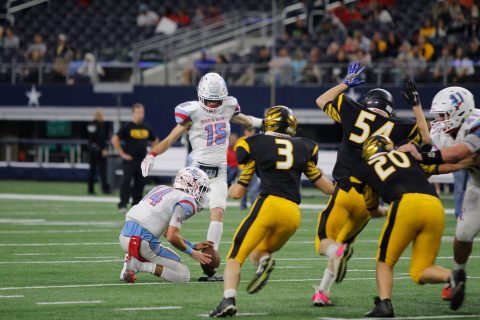 Although the basics remained the same, this assignment was very different.

“With our school, we only focus on one team. It was a whole lot easier to shoot at the playoff games because you just shot whatever looked good,” said Greene. “Whether it was your team, the other team, we only shot action photos. At our school, we’re shooting fans, and cheer and coaches and stuff like that. It was nice to be able to take photos of any player on the field.”

The setting was also very different from their high school stadium.

Miller was amused by the “little photography herd” of about 20 people running up and down the sidelines, following the action.

As one of the smaller guys in the “herd,” Miller tried to stay out of the way of the professionals, knowing that they’re getting paid and have to make cuts.

“But there were times where I decided it was enough, so I stepped up and sat on the ground, and tried to get in the business,” said Miller. He had to keep reminding himself: “I have professional equipment. I’m just like them, but I’m half their age, or even a third their age, and I’m taking pictures just like they are.”

Fruit of their Labors

The photographers would take photos throughout the game, then hand over their SD Cards to a UIL professional.

“It was really awesome to see our photos being posted where normally just the professionals would be getting credit,” said Greene.

Miller estimates that he took about 1,400 photos, but didn’t look at many during the game. He handed over his SD card and left the stadium. Checking the UIL accounts the next day, he saw his name credited on photos posted to the official social media account.

“This is a professional account, and just little amateur me, getting on their page. Almost kind of impressed myself,” Miller said. “That was kind of when I knew that what I did and what I do paid off. It was really good to feel recognized.”

Mix is grateful for the experience, which reinvigorated his enthusiasm for photography.

“It was fantastic and it really helped out my photography,” he said. “I wasn’t shooting the same things, I was in a bigger setting, and it was fantastic. It made me realize I want to stay with photography.”

This is the final year with Legacy Student Media for Greene and Mix.

Although she’s not planning to major in photography, Greene’s been checking out the online newspaper and yearbook at the college she’s planning to attend, and will probably keep doing photography on the side.

Mix also plans to keep it up next year.

“Photography’s definitely going to be a hobby, like an outside source of money. Maybe I’ll do portrait photography for families and stuff. I like to do that, too,” he said. “And I want to try to get into bigger sports events, maybe shoot college games or work my way up and take actual professional NFL games. But as of right now, my plan is it’s just going to be a side hobby in college.”

Miller still has two years of high school. He hopes to become a photo editor for the student media by his senior year. Nature photography is his favorite, but he still loves sports photography. Miller would welcome the opportunity to photograph another event like this – working alongside professionals offers a learning opportunity.

“I’ll notice on the field, somebody off in a corner, and wonder what they’re doing. So when they leave, I’ll go over and check it out, it’s like, ‘Oh! I see what they were going for!’ So I try to pick up on little things like that,” said Miller. “I want to get better at photography, and that’s really the best way to do it; be with people who know more than me and try to learn the best I can from them.”

He said this experience helped him realize he has just as much potential as the professionals he was working alongside.

“Really, all photography is just observation. I’ve always been keen to that,” said Miller. “It kind of comes naturally to me, but of course practice is everything.”