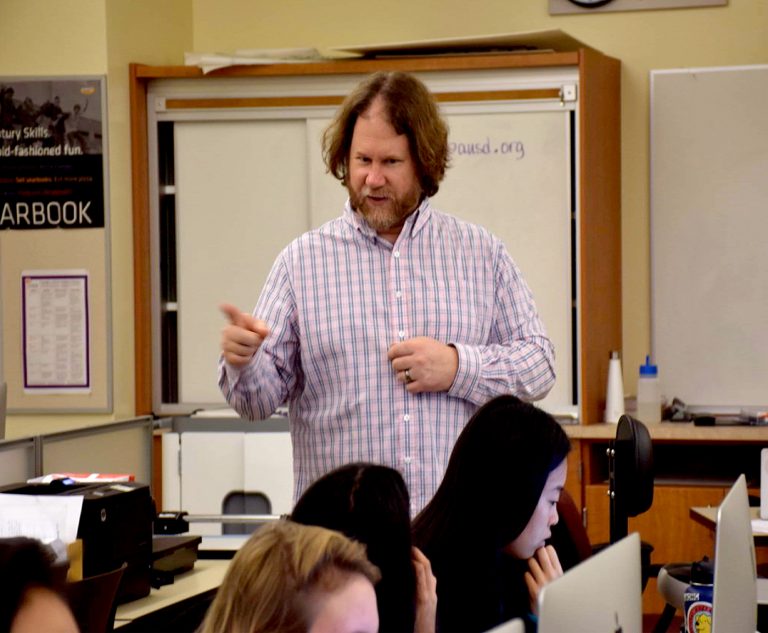 After 18 years as an award-winning publications adviser and English teacher in Michigan, Brian, concerned about the state of education in his home state, left his comfortable teaching position and, with his wife, Leigh, and their two kids, Jude and Dylan, sold his home and headed out to Northern California to teach and start a new life.

Did you do journalism in high school? If so, what publication and what was your role?
I was on the newspaper staff, The Blue & White, advised by Betty Martin, who I am still in touch with on Facebook. I loved the freedom of the staff and I loved writing about sports.

How and why did you become a yearbook adviser?
In high school, I was convinced that I was going to be a sports reporter. Then, during the summer before my junior year of college, I took an education class, mostly to fill a hole in my schedule. At that point, I realized that teaching was something I might really enjoy. I didn’t necessarily love high school, so I always think it’s ironic, or at least interesting, that I decided to work in a high school for the rest of my career — but I thought that I had an opportunity to provide a few teenagers with a more fulfilling high school experience than the one I had.

I met with a couple of schools at the Michigan State teacher job fair in the spring of 1996, and one of those was Waterford Kettering High School, where the adviser was retiring and they were looking to hire a yearbook/English teacher to take her place. I got a callback that afternoon, interviewed at the school the next week, and was hired before the end of the school year.

I’ll never forget meeting the previous adviser in May, right before she was going to retire. She said to me, “you aren’t planning on doing one of those journalistic yearbooks, are you? People hate those.” I wasn’t quite sure how to respond, so I just said “well, I am a journalism major.” She gave me her phone number and told me to call her if I had questions. I never did.

Where did you advise before Paly?
I taught in Waterford, Michigan for 18 years before my family and I decided to move west. I had lots of ninth grade English, about six years of AP Language & Composition, advised the newspaper for about 12 years and had the yearbook for all 18.

What brought you to California and Palo Alto High School?
A few years ago, Michigan was becoming an increasingly difficult place to teach; most of my colleagues were feeling really burned out. More and more, I started hearing teachers I really respected recite the “retirement countdown.” They’d say things like, “I have only 12 years and six months before I can retire, thank goodness.” I always vowed that I wouldn’t do the countdown. Tenure laws have become virtually non-existent in Michigan and several of my close friends, who had at least 15 years of teaching experience, were being pink-slipped in a district-wide effort to save money. The hoops we were jumping through in order to prove that we were “highly effective” seemed to have very little to do with our actual teaching abilities.

Around the same time, I had been dealing with some health issues; I was diagnosed with testicular cancer in 2011 and went through chemo. Then I was diagnosed with lymph node cancer a few years later, went through 20 rounds of radiation treatment and vowed I was going to make some positive changes in my life. My wife is also a teacher, and we decided, together, that we both wanted to try living and working somewhere else. I had lived all of my 40 years up to that point in Michigan; but we had had a couple of miserable winters in a row, and I just wasn’t feeling like it was a healthy environment for me, professionally and personally. I had heard through the JEA Listserv that there was a potential yearbook and journalism opening at Paly, and the Bay Area was high on our list of desirable destinations. I interviewed via Skype, managed to take a couple of trips to San Francisco that spring, and was hired in April. We sold our house in Michigan, packed up a moving van, and left the day after school let out for the summer. I’m so proud of my wife and my kids for being willing to go on this journey with me. We landed in an amazing place.

What do you like most about advising a yearbook?
I love seeing the development of an idea into a beautiful feature. I tell my kids at the beginning of the year that the book contains 350 blank pages. I am fascinated by the idea that we take something that doesn’t exist in the world in September, and turn into an incredibly important journalistic and photographic record of the year by May. Seeing my kids be proud of their work is invaluable; it’s really hard to get that same satisfaction when there isn’t a tangible product.

What has been the most difficult part of advising for you?
Proofs! About 95 percent of the work along the way is a blast. That last five percent, making sure that it’s as perfect as it can possibly be, is a little stressful.

What advice would you give to a first-year adviser?
Try to make creating the book as student-centered as possible. I still struggle with this idea, because I love to be involved. But I try to recognize that the yearbook means the most to them when they’ve been most responsible for its creation. Sometimes, that means that they’re going to struggle with putting their ideas to paper. The struggle is what makes yearbook such an incredibly vital experience for them.

What made you want to come back for year two?
I’ve had the good fortune to have two “year twos.” The literal second year I taught, I was able to get my students to experience an epiphany by the end of the year: they started to realize they didn’t have to put together the book in the same way they always had just because they always had. This was the late 90s, and the staff was pretty stuck in a non-digital, triplicate-and-cropping-markers way of doing a book. I was surprised coming into the job, because I had been using PageMaker when I was in high school, had been trained in Quark Express in college, and then got a job where it seemed like the book was being put together the same way my mom had helped put together her high school yearbook at Detroit Cody High School in 1967. I had a sense that I didn’t want to rock the boat too much, that it was important to me, in winning their trust, to not start a yearbook revolution, but to show them some ways we might change. Once we got to designing a spring supplement, I suggested we submit the pages digitally. I distinctly remember one of my editors eventually saying she wished I had forced them to do this for the book itself — after they had insisted, throughout the year, that they do it their way. I smiled and knew that I’d be back and that things would work.

When I came to Paly, one of the things I loved was that I was essentially starting over, but with 18 years of teaching experience under my belt. The first day of yearbook that first year, I had nine kids on the staff, only one of whom had been in the class before. And we were expected to put together a 350-page book, same as usual. By the middle of the semester, I had grown it to 15 students; and then the following fall, it was at 30. I really do look at that first year fondly, and I remember constantly challenging that small group to go above and beyond what they thought they were capable of. That underdog role can be so reinvigorating as a professional, provided you look at it as a challenge instead of an obstacle.

What goals have you set for your book, your program, your students?
I make a point of saying that each year’s book should be stronger than the previous year’s book. I think that gives them a manageable goal, creates a little bit of fun competition and helps to build a staff into the type of group that feels like they’re part of a special history. At the end of each year, I also tell the outgoing seniors that they ALSO should want this to be a goal; they should have done such an amazing job training the next generation that they’re happy when they realize they’ve been surpassed. I’m not sure if any of this is really effective, but I like thinking about that long-term effect.