Lewisville adviser spreading the love with Pay it Forward yearbook program May 8, 2018 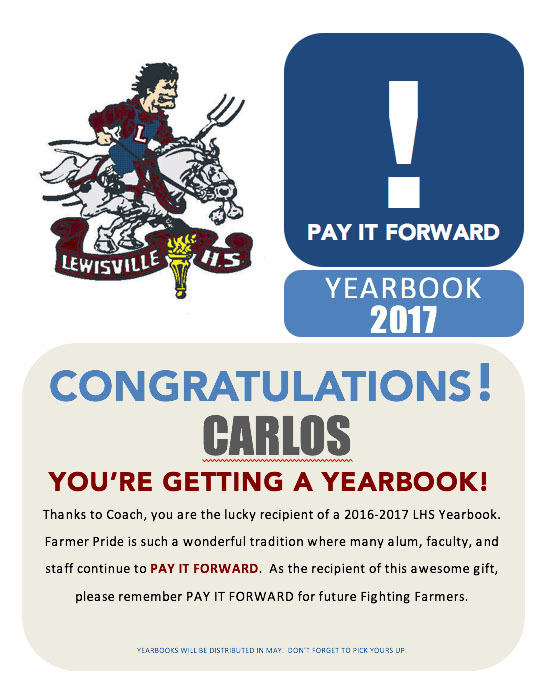 As we celebrate the extra efforts of yearbook advisers during Teacher Appreciation Week, here’s a special shoutout to adviser Kira Hayes from Lewisville High School in Lewisville, Texas, who has been spreading the yearbook love, and boosting yearbook sales, with her Pay it Forward program.

This year is Hayes’ sixth as a teacher and yearbook adviser at Lewisville. She’s a proud graduate of Lewisville; but after college, she worked in sales and marketing for several years before becoming a teacher and returning to her high school alma mater.

What she found when she returned and took over the yearbook program was a school that was struggling to sell books and needed a jump-start.

“About 50 percent of the students qualify for free and reduced lunches, so a $60-$90 yearbook is certainly not a necessity for many students,” said Hayes.

That’s where Lewisville’s Pay it Forward program comes in. Each year, Lewisville faculty and staff are given the opportunity to sponsor yearbooks for students who might not otherwise be able to get one.

Hayes works with the faculty to find hard-working students, who come from financially underprivileged situations. In many cases, the students participate in sports and clubs that are featured prominently in the yearbook, which makes the book a particularly special keepsake for them.

“I email every coach, sponsor and counselor that I know of, because these are the people who really know their kids,” said Hayes.

Any faculty or school staff member can then purchase a yearbook for any student, and the student receives a Pay it Forward program “You’re Getting a Yearbook” notice. Last year, the program resulted in 52 students receiving a yearbook, and Hayes said they were hoping for even more this year.

Congrats to Kira Hayes and the Lewisville High staff for creating such an awesome program!