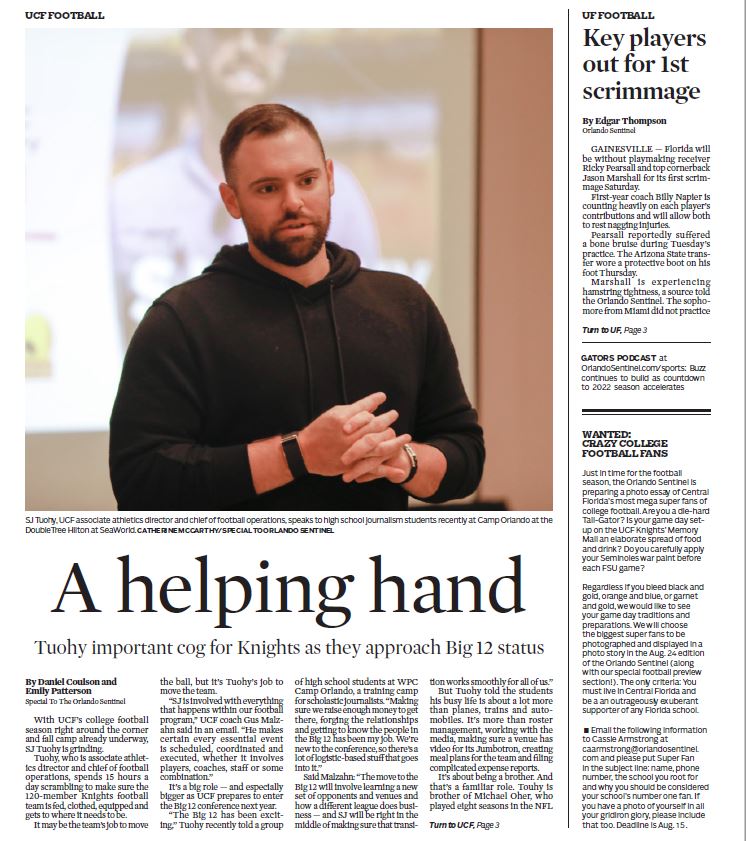 Camp Orlando is a legend in the yearbook community. Schools from all over Florida and as far away as Pennsylvania attend. Advisers and students receive top-notch yearbook training, develop and refine their theme package, design their cover and build their yearbook skillset. For students Daniel Coulson from Zephyrhills High School and Emily Patterson from Hagerty High School, they also walked away as published writers when they had a story featured in The Orlando Sentinel.

Coulson and Patterson were part of guest speaker Rick Brunson’s writing class during camp. Brunson is a professor at the University of Central Florida and a writer for The Orlando Sentinel. He makes use each year of his contacts at the newspaper to have the best story from his class published.

To teach students about interviewing, Brunson brought in SJ Touhy, UCF’s associate athletics director and chief of football operations. Some may recognize his name from the movie The Blind Side, starring Sandra Bullock. The movie told the story of Touhy’s family, including his adopted brother Michael Oher who played eight seasons in the NFL.

Students spent one day researching Touhy and creating a list of 10 interview questions. They then worked closely with Brunson to finetune and select the best questions to ask Touhy. Touhy talked to students about his job preparing UCF’s football team to enter the Big 12 conference and about his well-known family. After students interviewed him, they each wrote a story. The winning article was printed in The Orlando Sentinel, a well-respected and widely circulated newspaper, on the front page of the sports section.

Brunson recalls Coulson and Patterson’s story immediately stood out, and he worked with them to tailor the message to their audience by focusing on the UCF angle. Since the story was for the Orlando-based newspaper, the angle resonated with the paper’s readers.

“During the interview with SJ, Daniel was able to ask really great questions. The answers to those questions resulted in really great quotes,” Brunson said. “They did a really good job of capturing the essence and the soul of what SJ’s all about. That was all there in the story. SJ came up to me afterward and told me, ‘I deal with the media all the time. These were some of the most prepared and sharpest questions I’ve ever been asked.’ That’s because I work with the students so closely.”

That level of preparation is one of the goals of Camp Orlando. Walsworth Yearbooks sales representative Tracy de la Feuilliez, CJE, a former student journalist herself, is the driving force behind organizing the experiential camp, which she has run for the last two years and worked with since 2013. She wants to see students empowered to become leaders in tomorrow’s world of professional journalism by giving them real-life experience. Having published work for a portfolio is a beneficial asset as students apply to colleges, build resumes, compete for scholarships and consider job opportunities.

“We work so hard to make camp a valuable experience and give students an out-of-classroom environment where they can learn from people they are not used to learning from. It’s rewarding to us because we can see that the students coming up are going to be fantastic journalists, and if we had a really small part in that, it just makes us really happy and really proud,” De la Feuilliez said.

The opportunities presented at Camp Orlando, like Coulson and Patterson’s published article, are one of many reasons why De la Feuilliez advocates for schools to attend.

“I love getting so many schools from around Florida together to share in the spirit of what is yearbook and what is journalism,” De la Feuilliez said. “It gets them reenergized and excited about the coming year, and it gets me excited to see what they are going to produce. It’s also about their buy in of students and our instructors. The students and advisers who give up their summer to learn more about journalism and the instructors who give of their time is what really makes this amazing.”

Instructors like Brunson are just as enthusiastic about the camp experience as De la Feuilliez.

“Camp Orlando is one of the highlights of my year. I eagerly await the email from Tracy saying we’d love to have you come back. The reason I enjoy it is the energy of the camp. These are kids who are giving up their summer to go to a school by a different name. Anytime I find kids who want to pursue journalism, I’m all about that. Every kid who came through the door wanted to be there…As an educator, why would you not want to be around kids like that?” Brunson said.

While attending the powerhouse camp, students also spent time in design, photography, coverage, sales and leadership sessions in addition to writing courses. It was a weeklong, journalistic immersion.

“I think Camp Orlando gives everyone a chance to immerse themselves in their craft,” De la Feuilliez said. “We have tracks for every interest – newspaper, yearbook, marketing, etc. When you attend, you become and expert in that craft. You also can learn from many people around you.”

While the extensive training excites educators, it’s important to recognize that one of the important benefits of attending a yearbook camp is the relationships it builds. Not only do students and advisers bond with each other as a staff, but they also have the opportunity to network and collaborate with other yearbook enthusiasts like Coulson and Patterson did

If you are looking for additional training and workshop opportunities for you and your staff, talk to your Walsworth Yearbooks sales representative. You can also visit our Training Events page here.