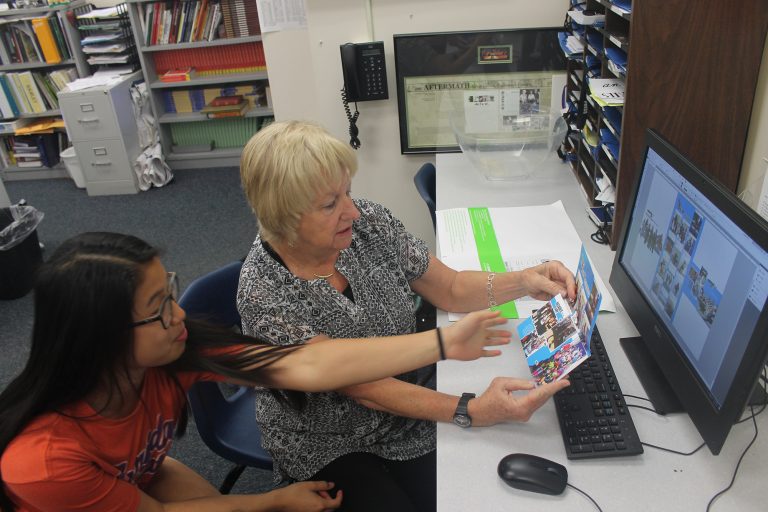 Judy Cannaday is a triple-threat teacher. She is one of those amazing educators who does it all. She keeps giving and giving, doing whatever it takes to lead her kids to success.

She has been leading the way with her outstanding journalism program in Florida for 26 years now. Her yearbook at Palm Harbor University High School, Aftermath, is a member of the NSPA Hall of Fame with 10 consecutive All-American ratings and it has also earned a CSPA Silver Crown and several NSPA Pacemaker Finalist awards.

Did you do journalism in high school?
I was on my high school yearbook staff, first as a staffer and then section editor.

Other publications you advise?
The EYE, the school newspaper, and theeyeonline.com, the student-produced website

Awards your kids and books have earned that you are especially proud of?
Aftermath consistently earns All-Florida, All-American and Gold Medalist ratings from scholastic press associations. Aftermath was inducted into NSPA’s Hall of Fame in April 2010, having earned 10 consecutive All-American ratings. We have earned Pacemaker Finalist awards and a Silver Crown. We have been featured in Walsworth’s Idea File magazine and other Walsworth publications quite a few times in the last 20 years. My students have entered numerous competitions at state conventions and have received top awards – not always, but often enough to feel great about their efforts and talents.

Other classes you teach?
Three classes of AP Literature, one Journalism 1 class and one newspaper class.

Total number of yearbooks you have advised?
Aftermath 2018 is my 26th yearbook as an adviser.

How and why did you become a yearbook adviser?
My first advising job was as a co-adviser in a middle school, and my first job as a high school adviser was in Virginia. The yearbook adviser who preceded me there had a lot of personal challenges, and the book production was left in the hands of the students. With no adult guidance, they did not — to put it nicely — produce a quality book; and because the staff had missed so many deadlines, the book wasn’t delivered until well into the summer. I was young, loved teaching and knew some of the yearbook kids, so I volunteered to be the new adviser. I really knew nothing about advising, other than my own high school experience. I didn’t know much about photography or how to develop film in the darkroom. I didn’t know about press associations and journalistic standards.

What I did have going for me were motivated students, a boy who was a great photographer and could develop his pictures, and an administration who gave me only a couple rules: get the book out on time and don’t print any pictures of kids drinking beer. OK, I can do this. And we did. The yearbook was on time, featured a decent variety of students and sold out.

What have you enjoyed most about advising a yearbook?
As cliché and obvious as it sounds, the best part about being an adviser is creating relationships with teenagers. In my regular classes, I have to maintain that teacher persona – structured, academic and professional. In my publications classes, I am more relaxed, laugh more, sometimes stress more and often sit back more. Once the year gets going, I often don’t even say anything at the beginning of class; the students just come in and start working.

The other best thing is keeping in touch with students after they graduate. Social media has made this so much easier. I celebrate their college successes, graduations, weddings, new babies, first home purchase, world travels. I text them while we are at Rays baseball games, and some of them have standing invitations to my Christmas party.

What has been your most significant challenge as an adviser?
In the past several years, time has become a real challenge. By this, I mean the actual time of the class period (46 minutes) and the amount of time some students and I spend after school (hours and hours) — but it also means that students don’t seem to want to devote that extra time that they used to. Since I have only one yearbook class during the school day, it is crucial that students come in after school to work, yet they seem to now be less motivated to do so. I think it’s because they are pulled in many directions – homework for rigorous classes, jobs, family obligations. It would be helpful to have more than one class period for yearbook, but it will never happen in my school. Fortunately, I still have students who care enough to do whatever it takes to make those deadlines, although it can be tough.

What made you want to come back for year two? What keeps you coming back each year?
The success of yearbook #1 made me come back for year two. The school community was so happy with the book, but I could see that there were many areas in which I could help my staff improve. Year one was really survival mode; we learned as we went along and hoped for the best. Year two was the beginning of a continuous improvement process. Honestly, I am still in that mindset – what did we do this year that we could do better next year? That drive keeps me in the game. I tell my editors that if we ever do a perfect yearbook, I’m retiring. Hmmm….I guess I will be back at it next year!

What advice would you give to advisers as the end of the year approaches?
I know that many advisers have their students start planning next year’s book, thinking about theme, design, graphics, etc. We don’t jump into next year until we’ve (I’ve) had a few weeks to just chill. The staff plans fun activities that fill a couple weeks, and everyone uses this time to forget about how much work they have put into making the book.

When we get bored, having nothing to do, we do start planning for the next book. The first step is to assemble the leadership team. The structure of this group depends on which and how many students want to become editors of some sort. Sometimes, there are obvious choices for EIC(s); sometimes, we have to implement a more formal application/interview process. Sometimes, I have had one EIC, or two, or three, or even four — it depends on the students, their qualifications and their desires. There have been years when I have invented positions to fit the needs of the students. One year, when my daughter wanted to be EIC, along with five other candidates, I had to step away from the selection process. I put all six girls in a room and told them not to come out until they figured out who would do what job. (It worked out just fine.)

After relaxing, then choosing editors, I think the staff should start tossing around some theme ideas.

Finally, fill out the paperwork and plan to attend a summer workshop. This is the absolute best way to get going on the next year’s book.

Tell a story that is indicative of your life as an adviser.
I like spending time with my staffers, especially at workshops and conventions. I am a night person, so room checks at curfew can take me an hour or more. This is the time when the kids tell me about their days. I hear about the classes they attended, who did what crazy stunt on the way to class, how much homework (for school, for Camp Orlando) they have, what YouTube videos they are obsessed with and other equally amazing, random topics. Sitting on their beds and listening to them be teenagers creates a shared experience that makes it so much easier to work together when it’s crunch time and things are stressful. Additionally, editors usually have super major projects due the next day, which take almost all night to complete; so these kids have been blessed to hear me sing (badly, and over and over again) Eric Clapton’s “After Midnight.”

Tell a story about a moment in your career as adviser that you will never forget.
Teachers absolutely love seeing a student who, all of a sudden, really gets it; it seems life-changing. One year, my EICs were struggling with page design; they were all novice designers, and they just couldn’t create a look that was right. My rep, Sabrina, showed them a magazine, and suddenly Sarah had that Aha! moment. She took that magazine spread, and in 30 minutes, had redesigned the yearbook layout into something that was cutting-edge, drop-dead gorgeous. That’s what advising, and teaching, really is – giving students the tools and skills to take ownership of their learning.