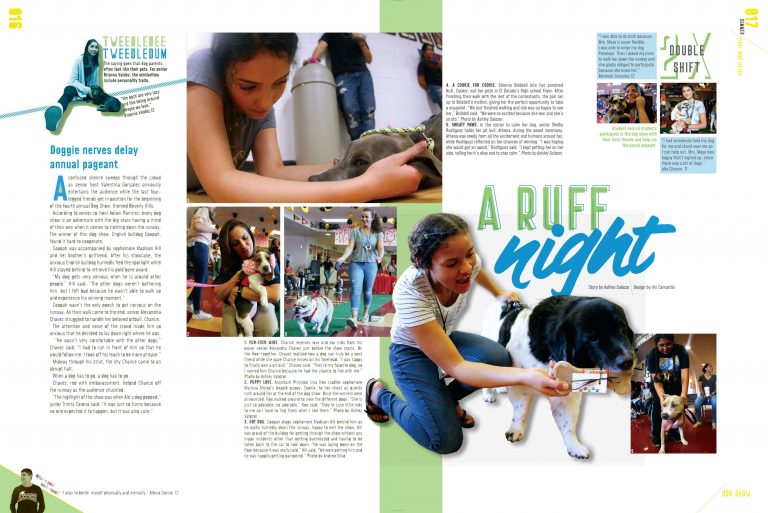 Long, lazy days at the pool. Sidewalks so hot you could cook an egg on them. The summer sun blazing down upon your shoulders. BBQs at your best friend’s house. Camping out at the lake. Hot days and starry nights. All things that could describe the dog days of summer.

It’s a phrase that can mean many things to many different people. But, do you know the real reason the hottest days of July and August are referred to as this? Many believe it is because it’s so hot out that it isn’t even fit for dogs. Others believe that the weather is so hot that the dogs go mad. But, those theories are not correct!

According to the Farmer’s Almanac, “The phrase is actually a reference to the fact that, during this time, the Sun occupies the same region of the sky as Sirius, the brightest star visible from any part of Earth and part of the constellation Canis Major, the Greater Dog. This is why Sirius is sometimes called the Dog Star.

In the summer, Sirius rises and sets with the Sun. On July 23rd, specifically, it is in conjunction with the Sun, and because the star is so bright, the ancient Romans believed it actually gave off heat and added to the Sun’s warmth, accounting for the long stretch of sultry weather. They referred to this time as diēs caniculārēs, or ‘dog days.’

Thus, the term Dog Days of Summer came to mean the 20 days before and 20 days after this alignment of Sirius with the Sun — July 3 to August 11.”

Who knew!? Well, enough of that history lesson, let’s get to the good stuff! Dogs are basically the best thing on earth and no matter what this time of year truly signifies, I think we should celebrate the core of that phrase… dogs! So, jump on in and cool down during these very hot days of summer with a refreshing look at how dogs [and other animals] can be featured in yearbooks.

The classic way to feature furry friends in yearbooks is by giving them their own school picture in the portraits section. What a fun picture day that would be! Here are a few schools that do just that.

Fort Madison High School, Fort Madison, Iowa showcased Roxy in their Faculty and Staff section. She really worked the camera for her photo.

Some schools have so many service dogs that they even get their own section! Marjory Stoneman Douglas High School, Parkland, Florida did a great job with this in their 2019 book. Those are some not good, not even great, but truly exceptional pups!

Lincoln Park Middle School, Lincoln Park, New Jersey has three goats that are helping them get rid of weeds on their school grounds! They have become such a hit at the school that they gave Bea, Mamba and Scorch their own photos in the Faculty and Staff portraits section. They may not be dogs, but they are furry friends of the kids at school!

Camanche Middle School, Camanche, Iowa gave a spotlight on their title page to Dixon and Gus. Dixon dressed for the occasion and looked incredibly sleek in a pink lei and sunglasses. 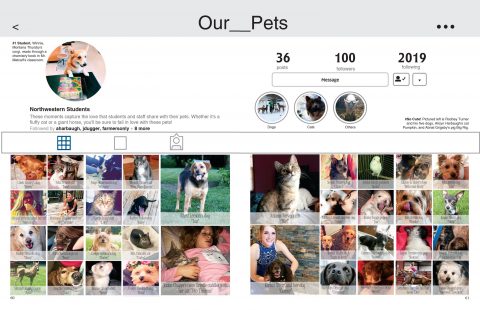 Get social with your yearbook. Here are a few spreads that brought their schools books [and their dogs] into the twenty-first century. Who knows, maybe one of the dogs at your school could be the next Doug the Pug!

You’ve heard of [and more than likely have taken] selfies, but what about Petsies? Morris Hills High School, Rockaway, New Jersey ditched the duck lips for dog lips and upped their selfie game by including an entire spread dedicated to student Petsies! 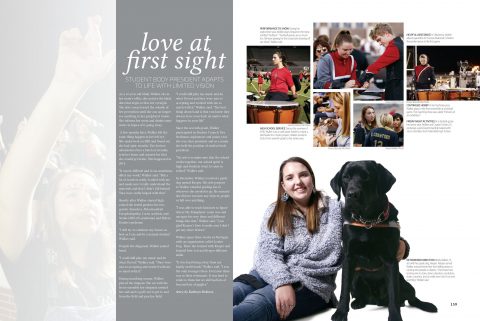 Some yearbook stories just write themselves. These next few schools had feature articles in their yearbooks that included members of the 4-legged variety. They certainly spiced up their book with these spreads! Maybe they will even inspire a story for you in next year’s book.

When you look at this spread from Legacy High School, Mansfield, Texas it really is Love at First Sight! They dedicated a feature to how their student body president, Mady, has adapted to life with limited vision and how her guide dog, Keeper, helps her get around.

Are you a dog person or a cat person? Palm Harbor University High School, Palm Harbor, Florida is absolutely correct, this age-old question really does tell all! Their 2019 pet feature pitted cats vs dogs and may have even mentioned a snake, a pig and a lizard.

Scrub-a-dub-dub it’s a dog in a tub! The 2018-2019 Cats vs. Dogs spread isn’t the first time Palm Harbor University High School has included pets in their book. Their 2017-2018 book dedicated a spread to the volunteer work that their Interact Club participated in that year, a dog wash for Suncoast Animal League. That spread and those dogs really are so fresh and so clean! 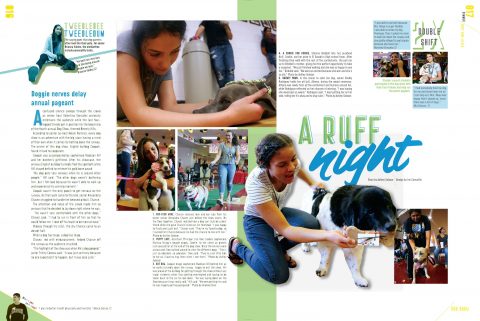 El Dorado staff gets ready for their Dog Show.

It’s a fact that the students at El Dorado High School, El Paso, Texas love their pets. I know this because they include not one but TWO great spreads in their 2018-2019 yearbook that feature their furry friends! The first spread shined a spotlight to their 4th annual Dog Show. There were some nerves that had to be overcome but eventually those pups really worked the runway! The second spread gave a well-deserved shout out to a few beautiful souls that opened their homes and their hearts to animals in need. Way to go Aztecs!

Money, it is something we all need. How do your students earn it? Some students at Hagerty High School in Oviedo, Florida dog-sit to make some extra cash (see in the spread above). Though, I am sure they get paid in more than just dollar bills. Slobbery kisses and puppy snuggles should also be considered a form of currency!

Merriam-Webster defines teacher’s pet as 1: a pupil who has won the teacher’s special favor; or 2: a person who is treated as a favorite by one in authority. But, they forgot a definition! Teachers also literally have pets and some of them are featured in yearbooks. 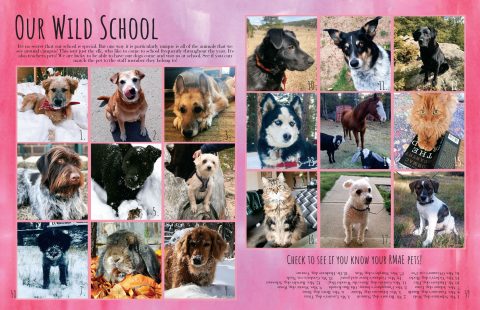 Match the Rocky Mountain pet with the staff member!

Roxy [above] isn’t the only animal at Tucker High School, Tucker, Georgia. They also dedicated a page to a few special pets who mostly likely really are treated as favorites by teachers.

Guess Who isn’t just a board game, it’s also something you can do on a spread in the Rocky Mountain Academy of Evergreen, Evergreen, Colorado yearbook. The school regularly has teacher’s pets on campus and includes them as a part of their instruction so they created a spread in their yearbook where you could see if you could match the pet to the staff member. Dogs, rabbits and horses! Now that is one school that I wish I could have attended!

Roger Caras said it best when he stated, “Dogs may not be our whole lives, but they certainly make our lives whole!” Did your yearbook feature pets? Send us photos of your yearbook spread that include pets and we’ll give you a shout out on social media! Email them to marketingyearbooks@walsworth.com.

Aimee Parsons is the Campaigns and Promotions Supervisor at Walsworth and a contributing writer to the Yearbooks Blog. She previously worked as a Senior Marketing Specialist for Walsworth, and an Account Manager for ClassScene, Walsworth’s online solution for photo and video sharing. Prior to joining Walsworth, Parsons was a corporate photographer for Burns and McDonnell Engineering. She owns and operates her own freelance photography business and studied commercial photography at Northern Arizona University.