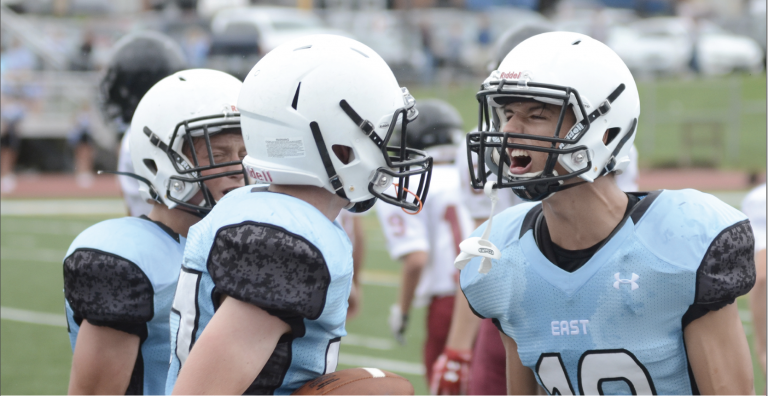 With a phone attached to their hands, most people come in thinking they’re good photojournalists. But I believe there’s another level that we all want students to reach in our publications. Here are some of the strategies I’ve used to help them reach that level.

Thirty minutes to showtime and the drill team was heading into the bathroom to put on their stage makeup and leotards for their contest performance. The photographer assigned to shoot the event knew he would love to have pre-performance images to tell the complete story. He also knew, however, the dancers would not share the same love of having a male photographer in the changing area. So the female editor who was with him writing the companion story took his camera and charged in.

Her storytelling image of nervous dancers caking on mascara earned her the dominant on the spread. I asked her later how she was able to capture such a nice photo.

“We talk about what makes a good photo all the time, so I just knew what we were looking for.”

This is one of those moments that reminds me that all my students could benefit from getting to see exceptional photojournalism, and simply seeing a lot of high quality images can improve a person’s photojournalism skills. Since that moment, I’ve tried a number of quick lessons or activities to make sure young photojournalists – and others in the staff room who aren’t busy – get to see and discuss strong storytelling images on a regular basis.  Here are a few of the activities I use:

I’m a basketball fan. For the month of March, millions of Americans are as well – even though many of them don’t really know what a travel or a pick in basketball is. There’s something motivating and fun about competition. So one day, in the doldrums of mid-year when most of the photographers realized their job takes actual effort (and aren’t putting much of that into what they’re doing), I decided to do something different. I created a photo face-off. I paired younger photographers with older ones. I created the double elimination bracket for them and then seeded the teams. Game on. For each week a photographer had to put his or her best photograph in a file to be shown at the first of class. The photographers’ images are judged in teams. I used polleverywhere.com to  create in-class polls for each class to vote on. I project the poll, which creates a live, fun, horse-race atmosphere for each competition while keeping the voting anonymous.

The process doesn’t take long – 5 to 10 minutes – but the payoff is big. The activity helps ensure everyone is shooting because they don’t want to let their partner down. The competition seems to raise the level of the photographers. Double elimination means they have another chance to redeem themselves. And yes, of course, there were prizes for the eventual winners.

First, second, third time’s a charm. Photographer Katie Drake knew she wanted a photo of this routine, but it took the right photo settings, texting the subject to know the best position and attending three separate events to get the photo she wanted. Photos by Katie Drake

Understand that failure is part of being  a photographer

Beginning photographers may shoot 150 images their first time out and the yearbook may not use one. It’s a message I send out immediately to new photographers. Be prepared to fail – a lot.

That may sound negative, but I try to let them know that success may not come quickly. What I’m also saying is don’t get frustrated with yourself. Keep shooting. Keep trying.

As much as I tell them to expect some failure, I also try to make sure they have early success. A young photographer whose first assignment is a night football game on a dark field is apt to fail if all he or she has is a kit lens where the best f-stop is 5.6 when zoomed in. So instead, I encourage them to make sure they’re testing their skills at a junior varsity game, which usually starts when there are two more hours of daylight.

Have them pair with a stronger photographer

I strongly believe in true student-run publications. With a large staff, I need students to play the role of assistant teachers on a daily basis. However, as photo editors of a large yearbook with a large photo staff, the editors spend much of the time editing images. So we created a photo mentor position. The second- and third-year staff members take on the role of working with the inexperienced staff members. They meet to discuss ideas, check up on shooting habits and co-edit the initial download of all images as well as do some side-by-shooting at sporting events or club activities. The establishment of such photo mentor connections between new photographers and more experienced photographers can provide long-term continuity of each year’s success.

Zoom into a classroom, take three photos, zoom out. Ugh. Too many times teaching summer workshops or in the school hallways as I trail and observe young photographers, I’ve seen the standard modus operandi. In response, I preach patience and perseverance. Stick it out in the classroom. Disappear. Be boring enough that they forget you and life in the room becomes natural again. Or if you go to an assignment, research it, watch it. Know where the action and reaction is. 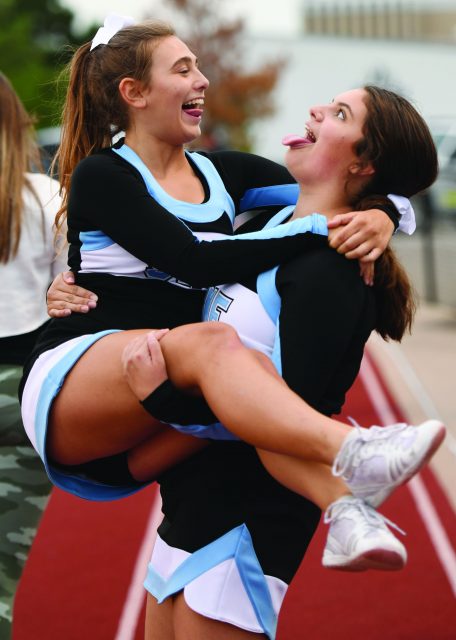 The face says it all. Sometimes the best photos don’t actually happen during the event. This photographer captured a fun sidelines moment demonstrating the relationship between the subjects, proving that reaction photos can be just as important as action photos. Photo by Elise Baker

I don’t have a study to prove workshops make a difference – just 31 years of experience. If I have a new photographer who is still struggling come the end of October, he or she is usually one who didn’t attend a summer workshop with us. The summer workshop gives rookie photogs a focused 20-plus hours of instruction and practice. That valuable learning and reinforcement is hard to beat. Once school starts, we can give them 45-minute chunks, but that’s not always followed by as much practice as we’d like.

So tell me what your approach to getting that image was from the very beginning?

The very first gymnastics meet I went to, I saw her doing it, and I knew right away it would make a really good picture. So after that meet, I texted her and asked if she did that same routine every single meet and she said yes. For all the meets she went to, I asked her if she’d tell me which side she’d do the move on so I could be on the right side at the right time. Then I asked her what order they did their routine so I could move to be on the right side for the right person. I was trying to decide if it would be best from right behind her or from slightly to the side. The first time I tried slightly to the side, and it didn’t work out great. So the next time, I did right from behind her and I liked the way it looked but the settings weren’t correct so I did it again and finally got the settings and the correct positioning. 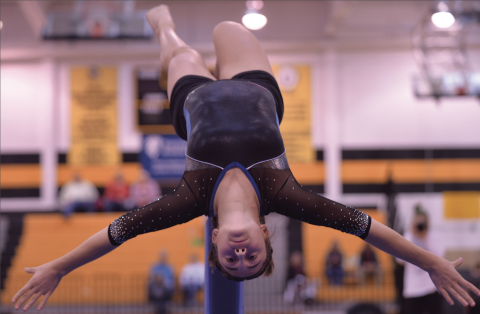 So you just knew something about that image was going to work or what?

I think beam was my favorite thing to shoot. But it was always hard to get their face in it because you want their body in it and their face. I felt like that was hard. As soon as I saw her go backwards, I knew it would be cool because she’s upside down and you had her face.

Were you frustrated by having to go back and forth or you were just used to that?

I wasn’t really frustrated by it. I was more excited to get it because I knew it would be cool when I did.

How many times do you think you shot it to get it?

I think I went to five gymnastics meets. I didn’t shoot it the first time because I didn’t know the move was going to happen, so I missed it, but I shot it the last four times.

How many frames did you go through to get it?

I was really committed to getting it, so I just held it down every time the move happened. So maybe 15 times four.

C. Dow Tate teaches journalism at Shawnee Mission East High School in Prairie Village, Kansas, and is the director of the Gloria Shields NSPA Media Workshop. In his 31 years teaching, he was inducted into the Scholastic Journalism Hall of Fame at the University of Oklahoma, named the Dow Jones Newspaper Fund’s National High School Journalism Teacher of the Year and chosen as a JEA Distinguished Adviser. His students placed in the National Scholastic Press Association’s National Photo of the Year contest 46 times, and his students’ publications consistently win the NSPA Pacemaker and the CSPA Gold Crown.