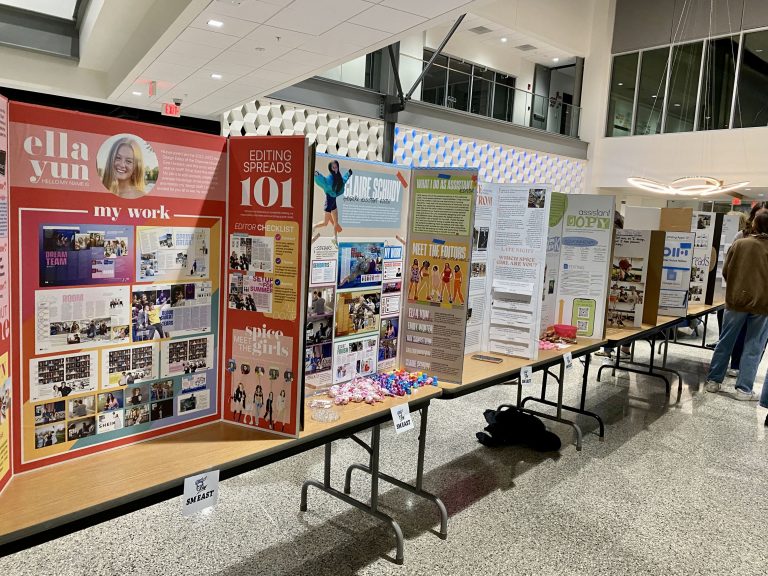 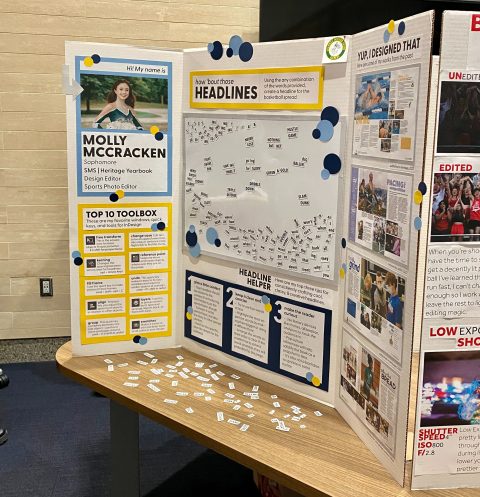 Viewers learn design tips and tricks and have the opportunity to craft their own headlines on Shawnee Mission South sophomore Molly McCracken’s journalism board. McCracken, a design editor, also showed work samples and was available for questions on Thursday night’s Journalism Night at the Center for Academic Achievement in Overland Park, Kansas.

All five schools gathered their 249 combined journalism students under one roof to present boards to hundreds of parents on what they do in yearbook, newspaper, photojournalism and/or web classes. What they presented was incredible, and they did it to a full house. Their professional boards included an explanation of their role on staff, photos of themselves, interactive elements, and some even had a prepared presentation to go with it as they answered parents’ questions. The boards were professional, interesting, and for many, part of their semester final and grade. Parents got to learn about what goes on in the classroom as well as the various roles, and an added motivation was the numerous gift card giveaways. 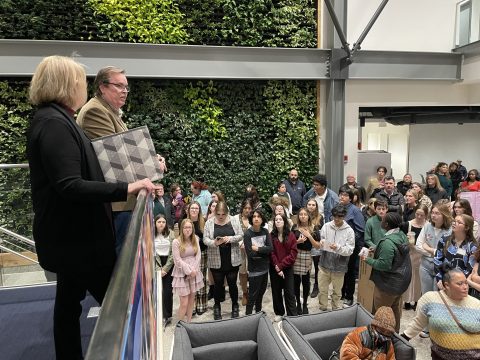 Adviser Dow Tate of Shawnee Mission East thanks students and parents for coming to the Journalism Night for the district while standing next to Shawnee Mission Northwest adviser Susan Massy, who will retire at the end of the year. Hundreds came out to the event at the Center for Academic Achievement in a show of support for the journalism programs.

It was a special night for Susan Massy, CJE, the adviser for Shawnee Mission Northwest High School, as she is retiring this year after 44 years of teaching. Her program is the above-mentioned most awarded publication in NSPA history, and she had 70 students present.

“We are thrilled to have so many parents here tonight,” Massy said. “They are here to learn about what students do in the various facets of journalism, and particularly in yearbook. The yearbook kids are here explaining how you put a book together, how you write a story, how you write captions, and that it’s so much more than just this annual that you throw together and somehow, miraculously, it comes out. So every one of the boards has an interactive piece on it, where they actually test the people to see if they understand what they taught about. It’s a cool thing. I saw one parent kind of sweating. The parents I think are excited to be here.”

That excitement was evident in Marie Austin, mother to Jada Austin who is a junior at Shawnee Mission West High School. This wasn’t just an event she felt compelled to attend – she took off time from work to be present that evening. She enthusiastically explained that Jada has a history of journalists in her family.

“This is a very exciting night for me because I majored in communications,” Austin said. “I wrote for the Avila Examiner in college all the time I was there, so to see [Jada] manifest in this way and be in journalism, along with all of her other items that she does – volleyball, national honor society – it’s been heaven for me. To top it off, her dad’s sister – her aunt – was a journalist for The Plain Dealer, and then she left there and she was a journalist at the Las Vegas Review Journal, and now she’s and editor at a Jacksonville, Florida, paper. So it’s a 360 full circle for me. I’m very emotional about it.”

Austin said she’s seen her daughter flourish in the journalism program at Shawnee Mission West under adviser Amy Morgan, CJE, even just from last year to this year.

“This year … she’s verbalizing to me how she’s putting it on paper, how she came up with the thought to do the story, and it really has been an exciting year for me.” 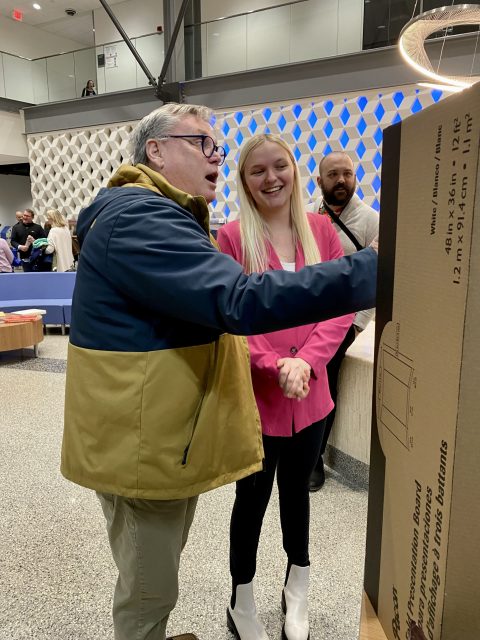 Walsworth’s Mike Taylor speaks with Shawnee Mission Northwest editor in chief Katie Burke as he livestreams the Shawnee Mission School District’s Journalism Night on his social media page, while Shawnee Mission South adviser Tucker Love listens. Taylor said he was amazed by the boards presented and even emotional to see how many parents showed up to learn more and support the programs.

Walsworth’s Mike Taylor, CJE, was present, live streaming from his phone, interacting with students he’s come to know well and the advisers he knows even better and being wowed by all he saw.

“Two hundred fifty students, a parking lot filled, three stories of science fair-type boards all talking about journalism, and all their parents are here – that’s what makes me excited,” Taylor said. “I started crying. I thought something else must be going on here, and I walked in, and I saw this, and I’m blown away! The boards are amazing! I haven’t even seen a bad one.”

Junior Brooklynn Bridwell-Keaton, the reference editor at Shawnee Mission Northwest, enjoyed the showcase, even the moments of repeating herself over and over again, because she likes telling people what she did and letting them know what the job at school entails, calling the event “really fun.” She explained the process of putting her board together, which for her, involved a lot of time at the library.

“We were doing our boards right before Christmas break, so over a couple days during Christmas break, I would go to the library,” Bridwell-Keaton said. “I would go print a bunch of stuff out, I’d rent a study room and I’d work for maybe 30 minutes to an hour for two or three days straight to put my board together.”

Senior Rylie Peterson, editor-in-chief of the Shawnee Mission North yearbook, which is led by Becky Tate, CJE, echoed Bridwell-Keaton’s feelings while her proud parents stood next to her.

“I’m just really excited to show what it is that I’ve been working on this year because I really explored a bunch of new and exciting opportunities and learned a lot of new things about journalism.”

Her dad, John, said it was a great night, and he was thankful for skills his daughter had learned in organization, leadership and working as a team.

Shawnee Mission North editor-in-chief Rylie Peterson shines a light on the work editors do for a yearbook with glowing lights on her board. Peterson shared her approach to leadership and her journey to the top.

Part of the success of the night must be attributed to the bond shared between the five advisers. To say the yearbook advisers in the Shawnee Mission School District in the Kansas City metro area are a tightknit group would be an understatement. Two of them are married to each. Two of them are former students of another. All of them are dedicated to empowering their students to become successful.

“We’re in a really unique situation because the five of us as advisers all get along so well,” Morgan said. “We compete against each other, but at the end of the day, we’re all on the same team and help each other out. We talk all the time and collaborate, so I think that helps feed the spirit of unity. We have a group chat that’s crazy some days, and we talk all the time.”

Tucker Love, the adviser at Shawnee Mission South, added that they had been Zooming that very day.

“I think we all share a similar sentiment that this whole experience is a testament as to what journalism can do as far as, yeah, we make yearbooks and newspapers and take photos, but it’s more than that,” Love said. “It’s communication skills, it’s the ability to talk and share with another person, and so they do it through the board itself, right – putting all the things on the board – but then having to stand by the board for a little bit and talk to people as they come up and have questions. I think it’s really cool to see these skills happening in real life, because we talked about hey, you’re going to take these skills with you for the rest of your life as you go to college and get jobs.” 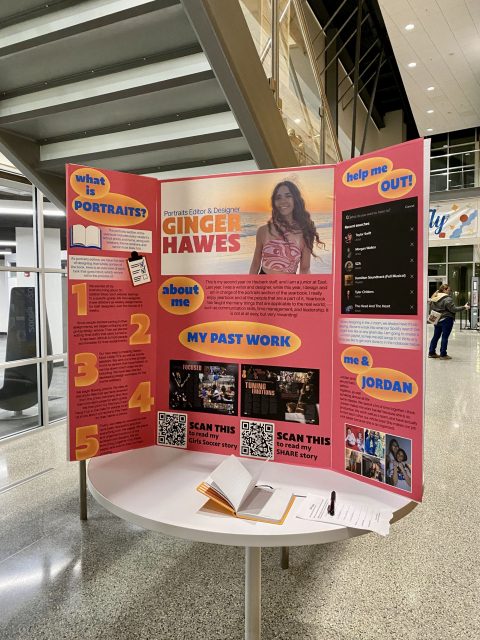 Shawnee Mission East junior Ginger Hawes knows that the portrait pages are some of the most viewed in the yearbook, so she’s determined to keep them accurate, visually appealing and interesting to read in her role as the portraits editor and designer by including unique sidebar coverage. To prove how sidebars add to the design of a page, she included her own secondary coverage with a J-Night playlist, QR codes to her work and pictures of her co-editor, whom she has known for years.

While the event was undoubtedly one of the most successful this year, it has a history too. Adviser Dow Tate from Shawnee Mission East started it years go for his own students, but it wasn’t until January of 2020 that all three schools participated. And then COVID happened. There was no event in 2021 and 2022 had a scaled back event. With Love’s many new students on staff, he said this was truly the first experience for most.

“They’ve never done something like this, so I’m not sure that they totally get why it could be important for them to actually come and do this and experience this, but I’m hoping that it’s valuable and upon reflection, maybe in a month, maybe tomorrow, maybe five years from now, they think, that experience was actually really, really cool.”

Morgan thought it has gotten progressively better every year.

“I was super happy with the participation from my students this year. Several of them who are kind of quiet in my classroom just came to life tonight and were like, ‘This is so cool. I got to see all these ideas.’ So that’s a benefit,” Morgan said. She added that “I just think it’s really neat to see parents come out and support the kids from other schools and get to see what everybody’s up to. That was the original motivation. People don’t really know, what is my kid doing at school all the time when they are working on newspaper or yearbook, and this is a really good way to show them. And then I think it’s just an extension to show them, here’s what all the schools are doing.”

Morgan stresses how important their close relationships are to the success of their program, but encourages other schools not be afraid to try something like this.

“You can’t be afraid to try these things. If you invite people, they’ll show up. They’ll see what you’re doing and they’ll think it’s cool. I think the first step in that though is reaching out to your colleagues and the people in your area, because we couldn’t all do it without each other.”

If you are interested in trying this for your school, Dow Tate has provided this description you can use, and you can see some photos from the event and boards here.