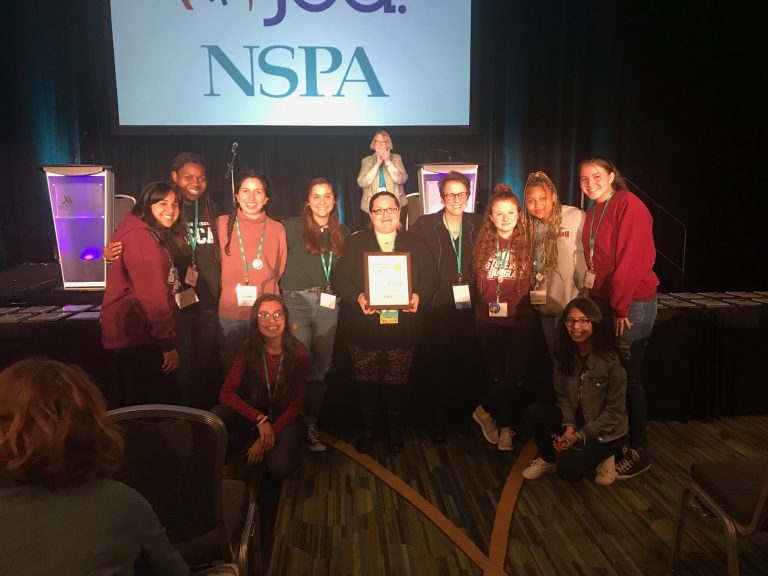 In the weeks following the tragic event at Marjory Stoneman Douglas High School in Parkland, Florida, one of the few bright spots that became apparent was the dedication of the school’s student journalists. Despite their youth, and the recent horror and loss they’d been exposed to, the yearbook and newspaper staff buckled down on their already award-winning publications.

That grit was recognized by the National Scholastic Press Association (NSPA). The journalists of Marjory Stoneman Douglas received the first Courage and Commitment Award at the opening ceremony of the National High School Journalism Convention in San Francisco on April 12. It was presented by NSPA executive director Lara Widmer.

Aerie Yearbook adviser Sarah Lerner was there to accept the honor with nine staff members in attendance. In addition to the yearbook program, adviser Melissa Falkowski and the staff of The Eagle Eye Newsmagazine, and members of MSD’s broadcast program were recognized.

Lerner described what the Courage and Commitment Award means to her.

“It’s definitely not something I take lightly,” she said. “I take my responsibility as an adviser seriously. I believe in what we’re doing, and I hope that we don’t have to be an example for another school. I hope nothing like this happens again, but if it does I’d be honored to answer questions and work with the adviser.”

The final pages weren’t easy for the Aerie Yearbook staff.

“I have a number of students who were there in that building and in those classrooms,” Lerner said in an earlier interview with Walsworth. “Some were very close with the victims. And it’s very hard trying to separate yourself and tell the story while, at the same time, you’re grieving and going through them.”

Walsworth rep Veronika Levine, CJE, has worked with the yearbook program for several years, and knows how much the staff deserves the Courage and Commitment Award.

“The name of the award, that’s really what this is. They could have folded up, or wrung their hands, or not shown, or dropped out of school. But, you know, they didn’t. They just kept doing it.”

Levine was there with the yearbook staff when they met, just days after 17 people were killed at their school. She and Lerner knew that the students were the best ones to tell their story, and their role was to support them and help them say what they need to say.

“I think the most important advice, as an adult or a rep, in this situation, is to give the children a voice. I felt really strongly, early on —they are just kids, but they have extremely strong feelings and beliefs on the subject afterwards — that it was my job as their yearbook rep and one of the adults they know to really give them a voice and a platform to have their voice heard. And I think the yearbook is one of the perfect formats for this,” said Levine.

Lerner stressed that it is a student publication.

“For me to sit here and bark orders wouldn’t be doing my job. I don’t want to micromanage. I’m there to support them and guide them. It’s their decision to make. I have a capable staff, I have editors who I trust.”

Levine and Lerner both worked with Aerie staff as they rose to meet the challenge of finishing a yearbook after a tragedy. They knew they had to address the events of Feb. 14, 2018 and cover it in a sensitive yet professional way.

They included memorial pages for each of the victims, but kept it in the style of their book.

“We kind of did a cross between one of our senior ads and the regular profiles that we have in the people section,” Lerner explained. “We wanted to keep it very simple, have the story be very straightforward, and be about who they were. Not the things you’ve heard on the news, but the little things about them: who their friends were, what their favorite color was. It was very hard to do for some of the students. Hard to design and hard to look at. And I feel for them. I know what they’re going through.”

Lerner and her staff rose to meet that challenge, and that dedication was recognized by the Courage and Commitment Award from NSPA.

The pages have been submitted, and the staff is now proofing what they created. Lerner said there’s a sense of relief, but their work is far from over.

“I’ll be working while we’re out here [in San Fransisco], and my students are working back at home. We’re really trying to do the best we can and make it the best book we can.”

When the students and faculty of Marjory Stoneman Douglas receive their yearbooks, that hard work, courage and commitment will be visible, and those yearbooks will be a lasting tribute to a difficult year.