Mallett named Distinguished Adviser by JEA as part of Adviser of the Year honors January 24, 2018 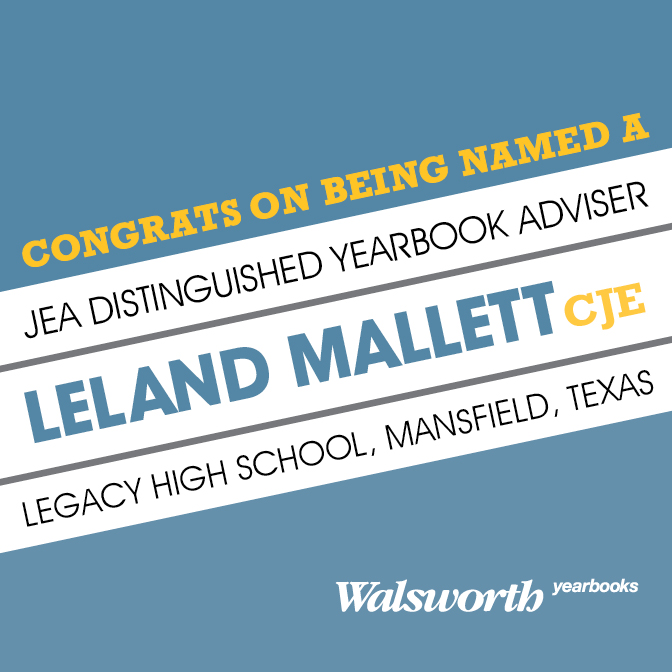 Leland Mallett, CJE, yearbook adviser at Legacy High School in Mansfield, Texas, was named a Distinguished Adviser on Wednesday when the Journalism Education Association (JEA) announced the recipients of its annual Yearbook Adviser of the Year honors.

Mallett advises both the yearbook and newspaper at Legacy, a Walsworth customer school, and his publications have won multiple CSPA Crown and NSPA Pacemaker awards in the short time the school has been open. In 2015, Mallett won the Texas Journalism Adviser of the Year, and is a past Special Recognition Adviser from the JEA and Dow Jones News Fund. He is also an instructor at Walsworth’s Elite Weekend workshops.

Brenda Field, MJE, of Glenbrook South High School in Glenview, Illinois, was named the 2017 National Yearbook Adviser of the Year. Field has been advising staffs for 21 years and her program has gained many accolades over the years. She is JEA’s Illinois state director.

JEA, an educational organization for journalism advisers, bestows these honors annually on high school yearbook advisers in recognition of their work in scholastic journalism in their schools and across the country throughout their careers. The winners are selected by a panel of past winners and a team of four student media experts.

All of the Adviser of the Year honorees will be recognized at the upcoming 2018 JEA/NSPA Spring National High School Journalism Convention in San Francisco, April 12-14.