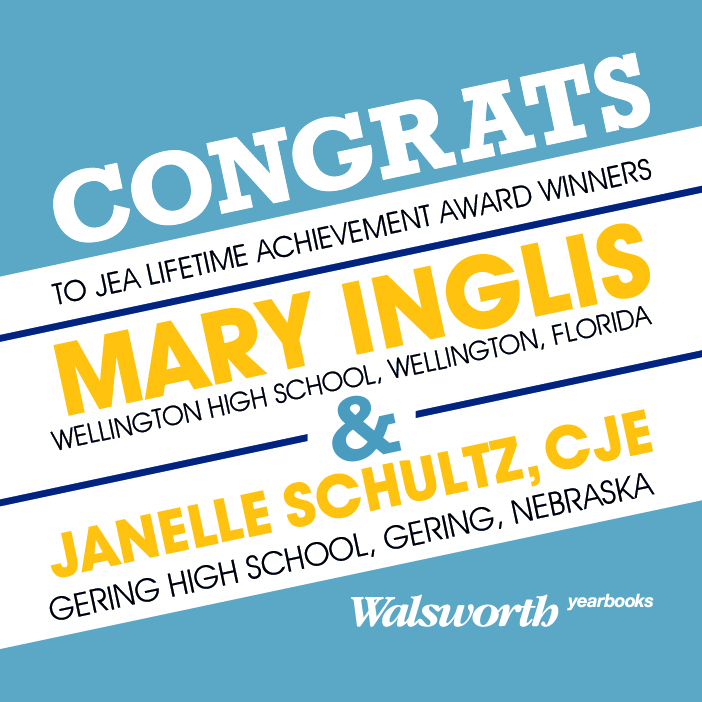 Inglis, Schultz among those named Lifetime Achievement winners by JEA

Inglis began advising yearbook in 1979 and continued to serve scholastic journalism ever since. In addition to training aspiring journalists at Wellington for decades, Inglis has served on the board for the Southern Interscholastic Press Association (SIPA), organizing workshops and conventions, leading sessions, raising money for scholarships and mentoring young advisers.

Schultz has been advising publications at Gering for more than 18 years and, during that time, her students have been frequent award winners. She has also been dedicated to strengthening scholastic journalism in her state through service to the Nebraska High School Press Association, serving as president, treasurer, contest coordinator and unofficial mentor.

Both Wellington and Gering are Walsworth Yearbooks schools.

Each year, JEA gives the Lifetime Achievement award to retirees for lifetime dedication to journalism education in the form of advising or other contributions to the profession. Scholastic press associations and individuals who are JEA members are encouraged to submit names of retirees in their state.

This year’s winners will be honored at the upcoming JEA/NSPA Spring National High School Journalism Convention In San Francisco, April 12-14.