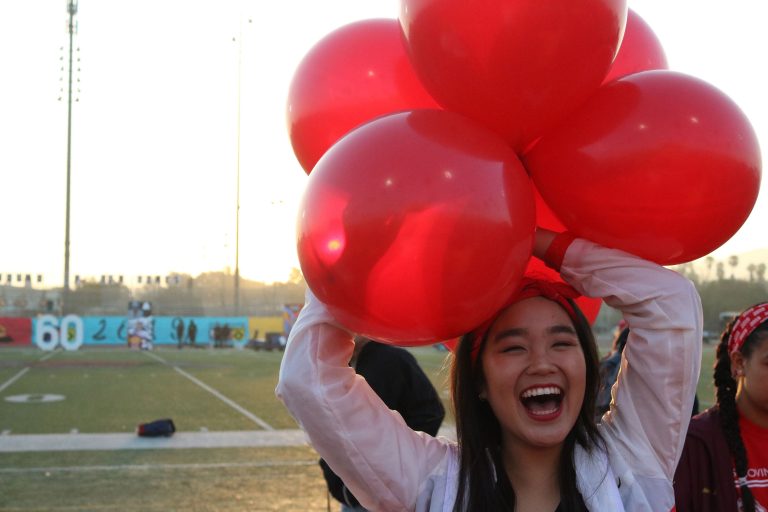 Distribute it, and they will come

A variety of distribution methods exist – from simple to flashy – no matter whether yearbooks are handed out in the spring, summer or fall. Advisers and administrators opposed to summer/fall delivery cite obstacles to distributing yearbooks, especially to seniors, for staying with spring delivery.

However, advisers at summer/fall delivery schools use a variety of distribution methods, from fund-raising dances to homeroom hand-outs, proving you can successfully get books to students in the late summer or early fall.

The Early Premiere Dance has been an annual event for 10 years at Western High School in Parma, Mich., said Erika Sponsler, who has been yearbook adviser for eight years.

The dance is in the cafeteria after the first home football game following the start of school. About half of the school’s 950 students attend, and they have earned an average of $1,600 in recent years from the $4 admission and selling yearbooks to students who did not pre-order. The dance is a big event because it is one of only four school-sponsored dances during the year, Sponsler said.

The yearbook staff works the door and distributes the books. Yearbook parents chaperone, a DJ is hired to play music and for food, the vending machines are turned on. A special area is set up for the previous year’s seniors to get their books and hang out to sign.

“Graduates are invited to come back and tons do – sometimes more than for homecoming. They do not have to pay for the dance,” she said.

Official distribution begins the week after the dance, when students can stop by the yearbook room before or after school and get their yearbooks.

Meanwhile, Hanover-Horton High School in Hanover, Mich., held its first yearbook distribution dance this year, and adviser Jackie Gregory deemed it a success. Estimates showed more than half of the school’s 500 students showed up.

Admission was $3, even if they just wanted to get their book and leave. The Student Council donated concessions. Four teachers and four parents chaperoned, and staff members took admission, helped with concessions and passed out books. Staff members who did not want to attend had to secure the chaperones.

Gregory said tables were set up with pens for students to use.

“I didn’t think they’d get it (but) they all sat around and were signing,” Gregory said.

Remaining books were handed out in homeroom the next week. Gregory said that was the main reason she wanted to do a dance. Teachers told her distribution during homeroom disrupted the day because students were only focused on the yearbook.

“I thought, if we do this, we can turn it into a fundraiser,” she said.

When Lee’s Summit West High School in Lee’s Summit, Mo., opened two years ago, yearbook adviser Michael Russell knew traditions needed to be started. West students were coming from other Lee’s Summit schools, one of which had a spring delivery yearbook. To win over students to the idea of an August delivery, he and the staff threw a Release Party.

The yearbook staff mans the Commons area, provides free pizza and drinks, plays iTunes “louder than necessary,” and uses a big screen to show pictures of seniors that yearbook photographers had taken during the year. They also had a confetti cannon.

“It was cool until we had to clean it up,” Russell said.

Of the remaining yearbooks, some were picked up during registration, then the rest were taken to the office so parents could be called or books could be mailed to students who moved.

Topping off the year

Sara Harris jumped in as yearbook adviser at Hackett Catholic Central High School in Kalamazoo, Mich., helping students produce the 2004 and 2006 yearbooks. Those were the years her sons graduated, and she wanted them to have a yearbook. For the 2004 yearbook, she worked with another parent and four students from May until delivery after Thanksgiving. For the 2006 yearbook, the administration gave her a yearbook class and staff of nine. They started in August 2005 and delivered in August 2006.

For her distribution to seniors, Harris hosted an ice cream social for three hours at her house. She invited all 122 seniors, and 89 showed up.

For the remaining seniors, siblings picked up 10 books and Harris sent postcards to the rest so they could arrange pick-up. The underclassmen received their yearbooks during seventh hour on the first day of school.

Distribution can be done without too much fanfare.

“The majority of books are picked up, but it still entails mailing some, especially senior books. Just make sure the staff has mailing addresses for all seniors before they leave school in the fall. This can usually be easily acquired from the registrar,” Durnell said.

“When the books arrive, we get the word out. I come in a few hours each day the week before school starts to hand them out to those that want them. The rest are distributed to kids when school starts,” said Dan Davis of Rockridge High School.

“I deliver underclassmen yearbooks in homerooms at the end of the day on a Friday. Graduates have the opportunity to have their books mailed for a fee, or I make announcements in the paper, school educational channel, and on the marquee,” said Karen Yost of Mars High School.

First Flight High School in Kill Devil Hills, N.C., also has a low-key delivery. Adviser Robin Sawyer said books are available for pickup on Freshman Orientation Day, the first day of school and the Friday before Labor Day, when last year’s seniors come back for the football game against rival Manteo High School.

Graduates have told Sawyer that it is special that they pick up their book as they are going to college. She said some take it with them and open it when they arrive and are away from home with some time alone. Sawyer said they have told her, “I just sat and read the whole thing.”

One Response to “Distribute it, and they will come”