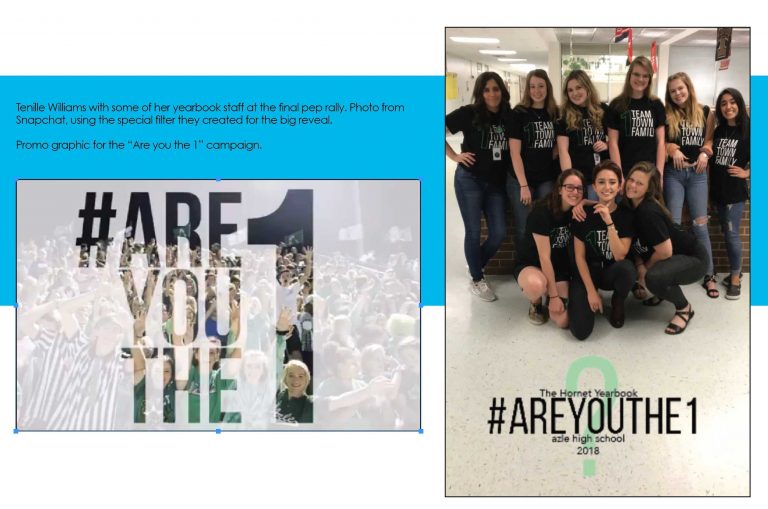 How a new adviser, new editors and new outlook made for one of Azle High School’s best yearbooks ever

When The Hornet yearbook staff at Azle High School in Azle, Texas, gathered for their very first meeting just one week before the 2017-2018 school year kicked off, there was a lot of uncertainty about how the year would go.

At that point, they hadn’t decided on a theme, not one of the four editors had previously led the student publication, they hadn’t determined any specific goals for the year and they hadn’t even met their adviser, Tenille Williams, a first-time teacher and first-time yearbooker.

Williams took on the role of The Hornet adviser on a whim, being offered the position when she was hired to teach at Azle High. Although she had no prior journalism or yearbook experience, she knew advising yearbook would be an exceptional opportunity.

And that instinct proved true. For Williams and her all-female yearbook staff, the year turned out better than they could have ever expected.

After the initial Hornet kickoff meeting, Williams, though overwhelmed by unfamiliar things such as an increased page count from the prior year and overseeing a 23-person staff, was confident in the abilities, dedication and experience of each of her students, as well as in her own ability to help bring out their best.

“The program was in a really good state when I took it over. The students were really creative and I felt like they knew what they were doing,” Williams said. “I got to come into my first year and just really help them work on marketing the book and on design, and I really let them lead and went with what they thought worked best, filling in where needed.” 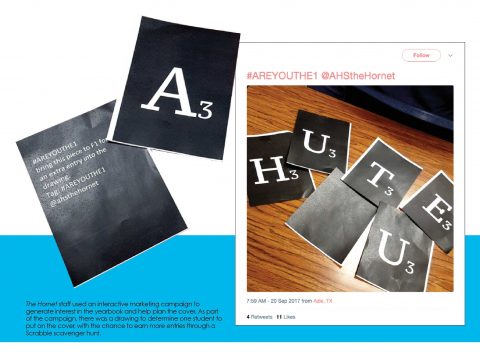 And a couple of weeks into the school year, the yearbook staff had established a solid foundation for the year ahead. They had a vision for the look of the book they wanted to create and how they wanted to market it.  Most significantly, they had their theme.

The staff chose “1” as the theme for Volume 79 of The Hornet, inspired by AHS’ football coach’s mantra, “One team, one town, one family.” Also, the Azle Independent School District’s motto is “It makes a difference to this one.” The yearbook staff wanted to tell that story by focusing on the individualism of each person at the school as part of the whole. While each person is unique and talented in different ways, everyone’s individualism fits together to create what AHS calls “the swarm,” the school community.

Williams and her four editors attended one of Walsworth’s fall Elite Weekends to further develop their ideas with the help of yearbook experts. They accomplished more in those three days than they felt they could have in six weeks, according to editor and senior Kaylee Pippins.

Going into Elite Weekend, The Hornet editors knew they wanted to push themselves and get out of their comfort zone when it came to the look of their 2018 yearbook, as well as marketing it. By the time they left, they had a fully thought-out theme, cover idea, an interactive marketing plan, design concept and a whole lot of motivation to capture the story of the year at Azle.

“This book was a total 180 from most other books Azle has ever created,” said editor and senior Haylee Francks. “Apart from the design aspect — the entire book has never been black before (matte black cover, black pages, etc.) — our marketing was the most drastic change from prior years. Before, we had never done a real marketing plan; we hung the posters we were given and we made occasional announcements over the PA system, but that was about it. ”

For this yearbook, The Hornet staff wanted to do something fun and interactive to promote it. They wanted to get the whole school as excited as they were about the yearbook and the story driving it.

Keeping with their theme, the yearbook cover would feature a group photo, focusing on “1” person surrounded by members from every Azle student organization. How they would choose “the 1” student who would be the center of the cover, however, wasn’t clear.

And then it clicked.

To determine who would be “the 1,” the staff created the #AREYOUTHE1 campaign, which got the whole school involved. Every Azle student who consented to their information being used in school publications was entered in a free drawing one time, and extra entries could be earned through a two-week-long Scrabble scavenger hunt.

Paper Scrabble pieces were hidden around the school for students to find. On the back side of the 150 hidden pieces was the message “earn an extra entry into the drawing,” complete with The Hornet’s Twitter handle and the campaign hashtag to share.

“We felt like doing a drawing and hosting a scavenger hunt would build a lot of hype around the book and encourage everyone to participate and increase our book sales,” said editor and senior Alexis Allen. “Everyone’s interested and wants to know who it is.”

After the two-week scavenger hunt at a September pep rally, the four editors shared with their school the 2018 Hornet theme, as well as revealed to them the details of the drawing. From a black mystery box adorned with the campaign slogan, “Are you the 1?,” and filled with 2,000 names, the four editors, along with Principal Randy Cobb, drew 15 names. Those 15 students then became the official contenders for the cover spot of “the 1.”

Over the course of two more drawings held during the winter and spring, the 15 students would be narrowed twice. First, Principal Cobb would cut the field in half, drawing seven names from the 15. Those students were profiled by The Hornet on social media as part of the campaign. The field would be narrowed again to five finalists, all of whom would be included in the cover photoshoot.

“The cover finalists encompass a wide range of programs and club and social groups, and the marketing campaign has gotten so many more people excited about the yearbook and, as a whole, what we’re part of,” said Pippins. “It really created a larger sense of unity.”

Rather than a group photo on the cover as The Hornet staff first planned, they wound up doing a large #1 laser cutout and used the group photo as their endsheet. This way, the person selected as “the 1” would be the only one who appeared within the cutout itself when looking at the cover.

With the five cover finalists selected and an endsheet concept in mind, Morgan Cope, editor-in-chief and 2018 graduate, and her fellow editors gathered a group of 23 students, each representing a different club or organization, at the football field for a night photoshoot. Since no one knew who “the 1” would be at this time, they did five different setups for the picture, rotating each finalist out of the coveted “1” spot.

In a final drawing, Williams, in the presence of two of her editors who would both keep the result secret until the big reveal, pulled the name of “the 1” from that black mystery box of the five remaining cover contenders. No one else on staff or at the school would see the endsheets or know who was on the cover until the book was complete and the winner was announced at Azle’s spring pep rally.

For the unveiling at the pep rally, The Hornet editor-in-chief Morgan Cope put together a two-minute video that went through how “the 1” was chosen. It featured the five remaining candidates, and at the end of the pep rally, the staffers announced who was finally selected while displaying the endsheet photo for everyone to see.

That afternoon, as a special thank-you, Williams let the winner and other cover finalists who purchased yearbooks pick them up before everyone else would receive theirs at general distribution the following week.

Not only did the engaging campaign help cultivate a sense of pride and school spirit among the student body, but so did the final product, Volume 79 of The Hornet.

“We really started from the ground up, my students and me,” Williams said. “But I never felt like we struggled. Everyone was so supportive, and my kids really helped each other amazingly, stepping in whenever needed. I couldn’t have been placed in a better position with a more wonderful community and students.”

And from the students participating in the Scrabble scavenger hunt to the inspiration from the football coach’s slogan to the support from AHS administration and the participation of the cover finalists, the 2018 Hornet yearbook truly embodied its theme to the fullest — one team, one town, one family.

Sarah Champ is a contributing writer to Walsworth Yearbooks. She has previously worked as a magazine journalist, marketing strategist and, most recently, content specialist at both national publications and nonprofit organizations. Champ holds a bachelor’s degree in journalism from the University of Kansas.