Becky Tate and Brit Taylor Honored by JEA as Adviser of the Year and Special Recognition Adviser December 12, 2019 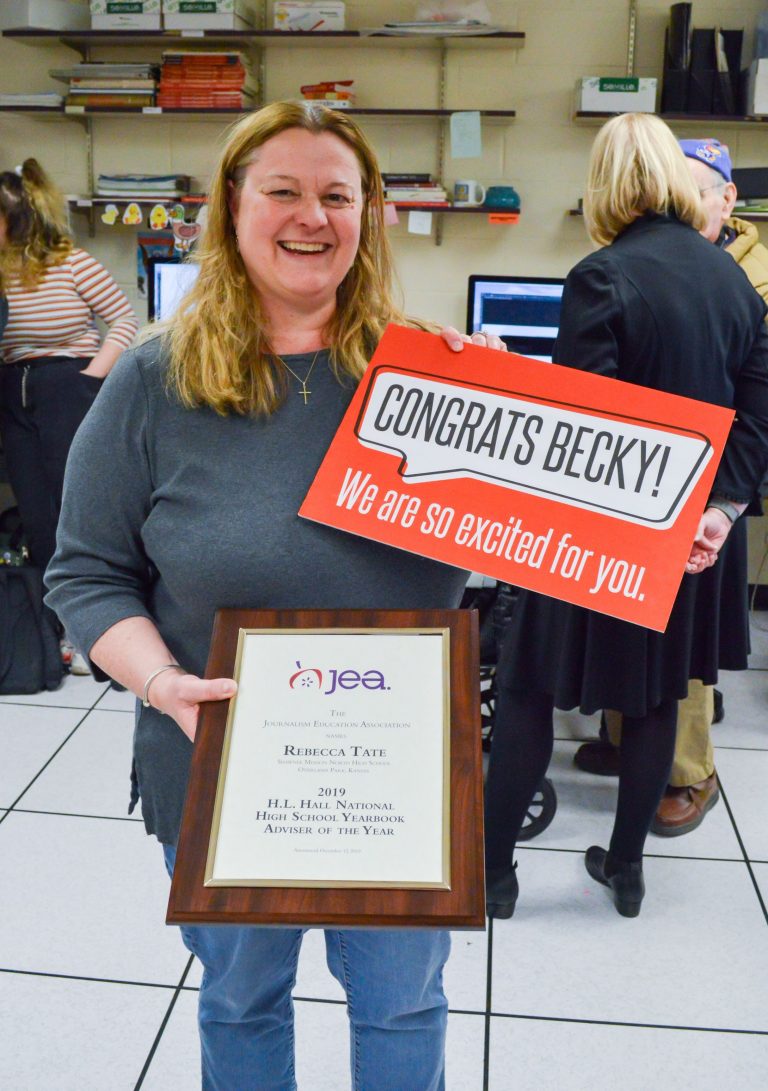 The prestigious annual awards recognize outstanding advisers in their field who have contributed greatly to scholastic journalism on a local and national level.

“I’ve had opportunities to leave over the years, and I never could. I never could because this is my community, and as far a yearbook and newspaper, we’re recording history,” Tate said. “If we don’t record it, no one’s ever going to find it. When [people] are looking for history, the yearbook is always where they look. Now I always remind people, 15-year-olds wrote that history, so there might be a couple angles to look at it with, but that’s why I try to impress upon the kids they’ve got to get it right because people are going to use that as gospel truth. A hundred years from now, they’re going to say, ‘This is what happened at Shawnee Mission North.’ And if you wrote it in there, that’s going to be fact, so you need to make it fact and true.”

After 31 years of teaching, Tate has earned numerous personal and publication awards, including many NSPA Pacemaker and CSPA Crown awards, and inspired many. Five of her former students have gone on to become journalism advisers themselves and two teach in her district, both of who attended her surprise ceremony. Her mentoring of students stems, in part, from having exceptional mentors herself as a high school and college student journalist.

“Becky Tate is the most unassuming, quiet presence in the yearbook advising world,” Walsworth Journalism Specialist Mike Taylor, CJE, said. “She goes about guiding her kids with kindness and gentle expertise. She has a heart as big as Kansas. I adore her. And she puts up with Dow Tate.” Dow Tate is her husband and rival yearbook adviser at Shawnee Mission East High School, who was there to cheer her on as she received her award, laughing good naturedly as she jabbed that now she had something to hang on the wall that he didn’t.

Britt Taylor – Hagerty High School
Brit Taylor has spent more than 20 years as a student publications adviser and has the awards to show for his time. He has won numerous national awards, including the NSPA Pacemaker and CPSA Silver Crown, and has frequently achieved All-American status. In 2019, one of his students received an honorable mention for Design of the Year and their book earned a CSPA Silver Crown. He was the 2017 Florida Scholastic Press Association (FSPA) Teacher of the Year and now serves as the president of FSPA. He has been a speaker at Camp Orlando, one of the largest yearbook workshops in the nation, for 15 years.

Taylor started off in student publications as a newspaper editor and went on to study journalism at the University of Florida. Walsworth Yearbooks representative Missy Green has known Brit for 31 years, back from the time he was an editor at one of her schools. She was thrilled to meet him again years later as yearbook adviser. She knew it would be a natural fit for the position. His kindness, patience, personality and talent make loved by all. Green said he’s mentored countless people, and she frequently sends people to him for advice. She joked about how many times she hears people say, “Brit Taylor said” with aw and reverence.

“He always has time for everybody, probably to his detriment because he’s probably exhausted,” Green said. “Everybody in the journalism community knows him … He makes everybody feel like they are number one on his list.”

Tate and Hagerty will be honored in April at the spring JEA/NSPA National High School Journalism Convention in Nashville, Tennessee.