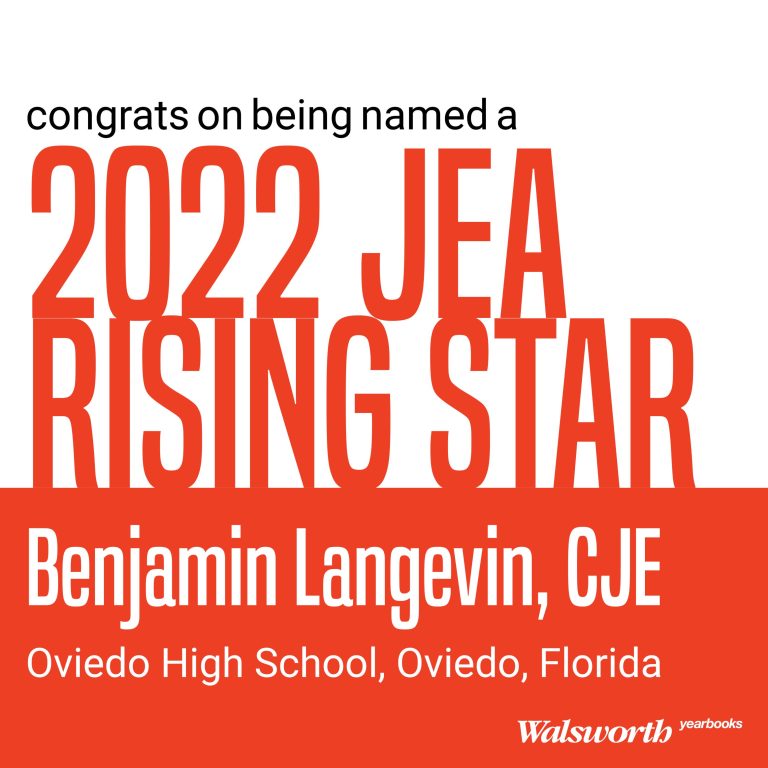 Adviser from a Walsworth School Named a 2022 JEA Rising Star

JEA has named the 2022 Rising Stars, and Walsworth Yearbooks is proud to recognize Benjamin Langevin, CJE, the adviser at Oviedo High School in Oviedo, Florida, a yearbook Walsworth prints. Each year, JEA recognizes several successful advisers in their first five years of advising who have demonstrated a commitment to journalism. This year’s five honorees were:

Langevin, who has advised both middle and high school journalism programs in the last five years, places a heavy emphasis on students owning their work.

“As an adviser and former basketball coach, I see my role as a facilitator and liaison between administration and students,” Langevin said in a quote from the JEA announcement. “Students are responsible for 100% of the writing, photography, design and coverage of both the newspaper and yearbook. I step in only when asked to and even then, I lay out options and allow for students to make the decisions they see fit. If they don’t have ownership of the paper, I am robbing them of the opportunity of learning and finding the joy that developing and producing good journalistic work brings.”

Langevin’s commitment has been noticed by those around him.

“I first met Ben when he was hired at Oviedo to replace a soon-to-retire Alicia Pope,” said Walsworth Journalism Specialist and National Key Accounts Manager Mike Taylor, CJE. “What I noticed was a fun, eager and willing teacher. The kids were so taken by his demeanor, and he was a real part of the staff right off the bat. When Ben took over the yearbook, he also stepped up to the leadership opportunities of the Florida Scholastic Press Association. When Oviedo’s book came out last spring, it was amazing. Ben is the real deal, and I’m proud to call him a friend.”

Those are the qualities that caused Langevin to be nominated for the Rising Star.

“Each time I visit Ben, I am just energized because he is a force and loves what he does,” Walsworth Yearbooks Sales Representative Tracy de la Feuilliez, CJE, said in her nomination letter. “His room is filled with support, acceptance, encouragement and excellence. It is so fascinating to see how his students respect him, listen to him and absorb everything he teaches and then go out into the school and community and demonstrate their skills. It is truly remarkable what impact Ben has made in just a few short years, and I can only imagine how great of an impact he will have on his students, his school and his community in the years to come. Truly, Ben is a shining example of a rising star.”

More information about JEA’s Rising Stars can be found on the JEA website.