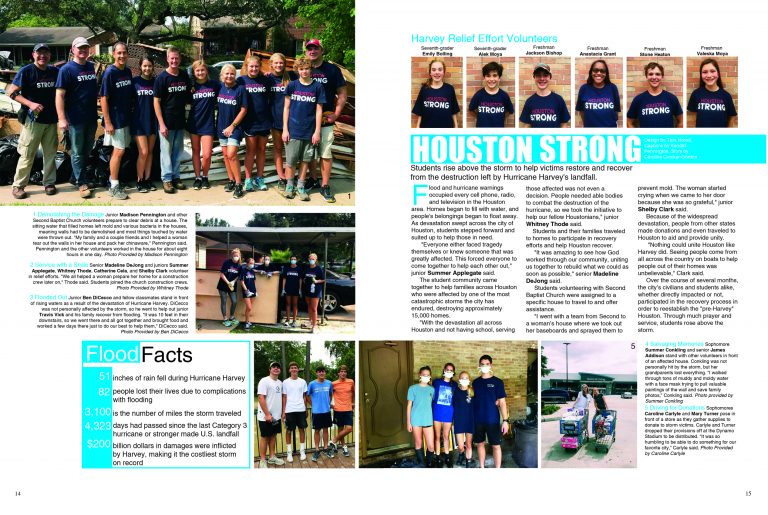 When the worst happens

The 2018 school year was a reminder that things can and will go wrong. From hurricanes, to devastating fires, to school shootings, to the more common but still tragic occurrences like losing a beloved teacher and student deaths, yearbook staffs across the country faced difficult editorial decisions.

While nothing can prepare a school for tragedy, having an editorial policy in place can relieve some of the decision-making burden put on yearbook staffs and help ensure support from the administration.

Hope for the best

“We had a strong beginning, until we had the storm,” said yearbook adviser Kay Medina Day of Second Baptist School in Houston, Texas.

Hurricane Harvey hit their school and community on Aug. 25, 2018. Along with Houston homes and businesses, the storm destroyed the ladder of the Aquila yearbook.

“Once the storm hit, we were just trying to ride it out. We weren’t sure which editor and staffers were affected. We just had to take it day by day, because some kids didn’t even have electricity. We had issues with communication,” Day said.

The record-setting flooding kept their school closed for two weeks. Second Baptist students, including the yearbook staff, spent that time helping with hurricane cleanup and rebuilding. 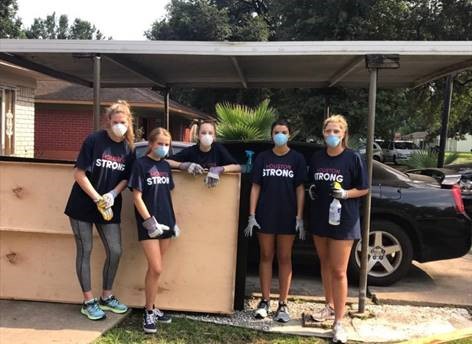 Students of the Second Baptist Upper School help clean up a home impacted by Hurricane Harvey. Photo by Madison Pennington

Making up for lost time

When they were finally able to return to their school, Day’s staff didn’t come empty-handed.

“At the end of the cleanup and rebuilding, once we came back to school, they were able to provide photos and information from what their experience was, first-hand.”

Even though they’d missed a lot of time, her editors ramped up their work.

“It seemed like an impossible task at first, with the time that we had. But we absolutely hit our goals because they wouldn’t give up.”

Hurricane Harvey had to be included in their yearbook, and Day wanted to do it the right way. For their school, that meant finding uplifting ways to cover it, and respecting the boundaries of everyone involved.

“Anything that we put on that spread, we want to focus on the positives, rather than who exactly was affected or what families lost their homes,” explained Day.

Err on the side of positive. Coverage should always be more positive than negative.

She wanted their coverage to reflect the year’s theme, “Loud,” about being courageous, being brave and remaining hopeful. Nitty-gritty details of the destruction wouldn’t have fit.

“As much as something may look like a good story, it may not actually reflect what we’re trying to say in our mission.”

Privacy is very important, especially when it comes to covering natural disasters.

Second Baptist is a K-12 school, so having young students creates additional privacy concerns. Their yearbook is typically shared with the larger church community.

“I think the biggest thing with our campus and staff is really making sure that we’re going back, talking to students and verifying information. Not only that, we’re not doing anything without their permission.”

The Aquila staff didn’t have an editorial policy on paper when Hurricane Harvey hit, “but moving forward we absolutely will,” said Day. “Especially being on the Gulf Coast, it’s an absolute must.”

A written editorial policy will be added to their style guide. Day recommends every school have something in place before it’s needed.

“There’s no real way to prepare for a natural disaster or an emergency situation. You really have to live through it. But looking back, I think that it’s always best to over-communicate, both with the adviser and between the staff and editors. Also, it’s about being open with each other and talking internally to see what we need to do.” 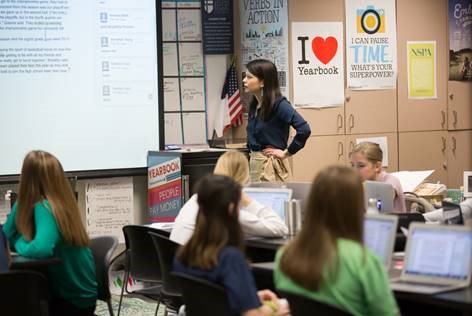 Prepare for the worst

Jim McCrossen has been the publications adviser at Blue Valley Northwest High School in Overland Park, Kansas, for 25 years. He’s had an editorial policy in place the entire time.

“It was created – at least the basics of it –  by the newspaper and yearbook teacher at my previous school,” McCrossen explained. “It’s kind of a living document, so it has changed as the years have progressed, but she had a lot of those policies written out when I student-taught. Then, when I started teaching, she just gave me her policy manual.”

One of the first policies McCrossen added to the document was on covering student deaths. Parents of a deceased student were upset it would be covered in the school newspaper. The administration ultimately backed the publications staff, but suggested creating a written policy on it.

The newspaper and yearbook will cover the deaths of any faculty member, student or staff member in a tasteful, respectful manner. The newspaper will cover the death as a news story and will include an obituary. The yearbook will make every attempt to run the portrait of the individual in the appropriate section as it would have appeared under normal circumstances. Depending on the deadline schedule, the person’s name along with the dates of birth and death will be run at the end of the advertising section. If the person were to have been a senior, or during the year that person would have been a senior, students, friends and family may run an advertisement(s) for the student with approval from the editors and adviser.

Covering student death is the most-questioned coverage his publications staff has to deal with.

“People get upset that we’re asking questions. I want to be able to point to the policy and explain what we’re going to do and why. That doesn’t always appease people who are upset, but it typically answers their questions.”

Having the policy has also been beneficial to McCrossen’s administration. When the parents of a deceased student called to ask how the yearbook would handle it, the administrator was able to read their policy.

On the same page

At the beginning of every school year, McCrossen goes over the editorial policy with his students to make sure they understand it. He has them sign it, and sends a copy for their parents to sign, too.

He also sends an email to school faculty, outlining what his publications team does: scholastic journalism.

“We want everyone to understand we’re there to cover what really happens, not what they want to have happened.”

When a change to the school’s editorial policy is needed, McCrossen doesn’t hesitate to share his plans with the administration.

“For the most part, my administration trusts me to run my classes legally and ethically, and do the right things for students,” he said. “I certainly seek their input because ultimately they’re the ones who have to back me up.”

McCrossen’s editorial policy was recently adopted by all five high schools in his district. They became aware of the need for consistent policy a few years ago, when discussing how to cover a transgender student in the district.

“If a student is transitioning, do we allow them to choose their own name? Do we need to wait for a legal change? It’s a difficult time for a student, as they’re going through that. We didn’t want to make things more difficult for the student or the family, but we also wanted to make sure we were on solid legal ground and that we weren’t going to cause any further problems for the family. And that it was something the district could support.”

In order to be sensitive to the changing needs within families, the newspapers and yearbooks in Blue Valley will use the student’s name and gender of record with the school district. If the student and parent(s) or legal guardian would like a change of name, or name and pronoun, the parents and student must notify the publications’ adviser and editors, in writing, of the desired change before any related deadline has passed. Every effort will be given to make that change, but no promises can be made due to the automation of names from district computers and photos from the studios sent to the yearbook publishers.

After cementing a district-wide publication policy on that issue, they started to talk about expanding.

“We realized it might be easier if we were all on the same page in the way we handle things.”

Since Blue Valley Northwest already had their comprehensive policy in place, the publications advisers throughout the district opted to use McCrossen’s after a making a few small edits so it would be applicable to the whole district.

Everyone should have one

McCrossen strongly believes that every school that creates a publication – be it newspaper, yearbook or online – should have a written editorial policy in place.

“It’s kind of like insurance, you hope you never need it, but if you do, you want it there.”