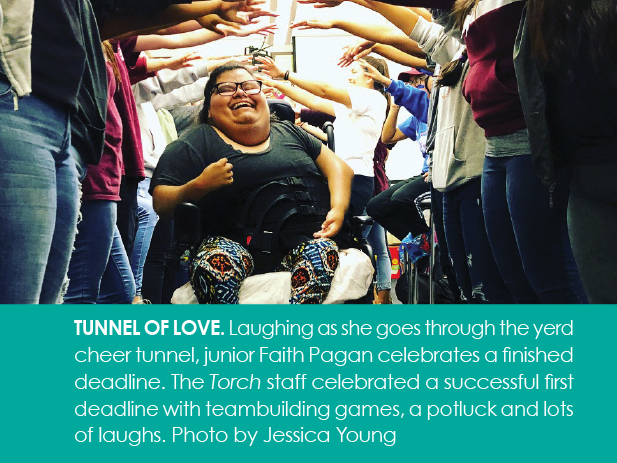 Everyone wins, when everyone’s in

Quality yearbook content is reflective of the school population… So shouldn’t the staff be as well?

At the front of the room, surrounded by boxes of yearbooks, Faith Pagan addressed the class. For many high school sophomores, speaking to a room full of peers would instantly incite an anxiety attack, but Pagan had no problem commanding the attention of more than 30 other teenagers. It was May, and the Torch yearbook staff was preparing to distribute the 2017 book and preparing for the upcoming year.

She tossed her head back with a laugh, as she delivered the punch line to her waiting classmates. Giggles and chuckles rippled around the room, as the yearbook staff members got to know the newest addition to their publications family.

Faith Pagan is a bonafide yerd. As a junior, she joined the Torch staff at Orange Glen High School in Escondido, California. At most schools, students like Pagan would have limited opportunities and wouldn’t be included in classes like yearbook. But Orange Glen is different.

Thanks to an effort spearheaded by Specialized Academic Instructor, Courtney Coffin, Pagan received the opportunity to experience high school the way she has always wanted to—like a regular kid.

“I like it much better here than at my old school. Here, I get to take yearbook and be in regular class with my friends. At my old school, I was only in special education class and only with disabled kids. Here, I get to do more things and that is better for me because I can learn more,” Pagan said.

Pagan receives support from the special education department at Orange Glen; and prior to Coffin’s instruction in the program, those students who needed the highest levels of support were typically in specialized classes and did not participate in the mainstream courses that students in general education programs did. But with a push for inclusion, students like Pagan have become more involved in school clubs and organizations, and have enrolled in general education classes. Pagan’s presence on the yearbook staff has been positive and impactful for her fellow yerds.

“Faith helps us know that even our small accomplishments are worth something because she gets excited about everything she does,” said senior Maria Martinez, assistant editor. “She’s helped us really look at how we do things, to have everything accessible to her, because we don’t want her to feel like she isn’t included in our yearbook family.”

Pagan has arthrogryposis, which limits her ability to move her joints freely. Some of her joints are stuck in a fixed position, limiting her mobility and causing stiffness and pain in other parts of her body. People with this disorder can also be missing muscles or have extra tissue and muscles that grow around their joints, further limiting their mobility and causing stiffness and inactivity.

Pagan navigates her life, and Orange Glen, in a powerized wheelchair, which she can control with her right arm, the only part of her body where she has functional movement. She also struggles with an intellectual disability, which Coffin believes may be partially due to a lack of rigor in her previous schooling environments.

Despite the challenges she faces, Pagan has become an integral member of the yearbook staff. Ensuring her participation on staff was meaningful and educational meant that editors and staff 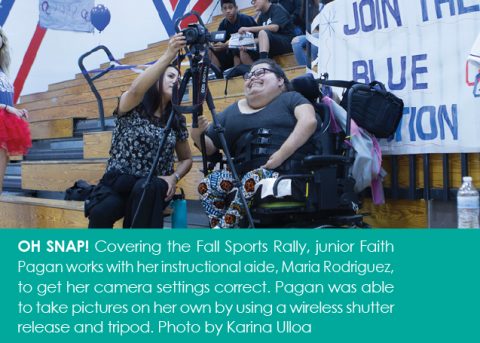 members had to work together to examine and adjust roles and expectations. While Pagan has physical limitations, the staff wanted to make sure that her yearbook experience wasn’t limited because of them.

With the help of a tripod and wired shutter release, Pagan can take pictures at school events. She uses an adapted joystick and keyboard to complete her tasks on the computer. Her ability to zip around campus has made delivering passes to students a breeze. And her personality, probably her biggest asset, has helped her seamlessly become an integral member of the Torch staff.

“Faith plays a role in our staff, and she knows it. She is able to help us, from sending out passes to students, to helping the editors find the best pictures to use for the book, to interviewing and helping us find our groove,” said senior Karina Ulloa, Torch Editor in Chief. “She is reliable and makes sure to communicate with us when she will not be at school. Faith definitely brings out the best in us when we are having a rough day.”

Pagan’s involvement with the yearbook staff is a part of Coffin’s effort to have more of her students experience mainstream classes. Pagan, and several other special education students, have one or more general education classes, which helps them to socialize and work with other students. Coffin has been stressing the importance of inclusion for students with moderate to severe disabilities throughout her tenure at Orange Glen. This focus has not only given access to students who traditionally would have missed out on a mainstream experience, but has also provided benefits for general education students as well.

In addition to helping Pagan and other students like her gain more practical experience, including a wider variety of students in classes like yearbook has numerous positive implications for staffs. It is important for students to learn how to work with a variety of other personality types and learning modalities—they can’t simply surround themselves with others, who are like-minded and abled. Additionally, if students are expected to create a yearbook that reflects the composition of the school, should the staff of that book not also reflect that population?  Working with Pagan has shown the Torch staff that having a broader representation of the student body working alongside them helps the whole team be able to more accurately cover the school year.

“Working with Faith has been truly amazing. She is energetic, always happy to be in class and always makes us laugh, which I think is important in a class like yearbook, where sometimes it can be stressful. Having Faith there reminds us that yearbook should be fun and should be a place in which you can be yourself, and that there isn’t one kind of person that can be good at yearbook,” said senior Jessica Torres, staff writer.

The biggest challenge in supporting Pagan has been finding ways to adapt tasks and assignments so that they are accessible to her. The class has daily ice breaker activities, which are planned and conducted by the “Fun Police,” who are responsible for the overall staff morale. These students work together to make sure that the games and activities are something Pagan can do, even from the 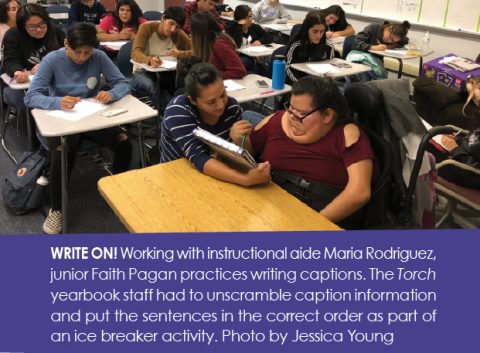 confines of her wheelchair. The staff has worked very hard to make sure that she is involved, in every way possible. She has even been assigned special jobs, like sharing jokes with the class when everyone is starting to feel stressed out as deadline approaches.

“Faith loves her yearbook class! She has told me it is her favorite class on many occasions. She loves being included in the social/academic games where she is a part of a team. I hear stories about all the hilarious things she says to make her classmates laugh. She also loves to participate in special activities such as taking photos at the rally. She is genuinely distraught when she knows she is going to miss a day of yearbook class,” Coffin said.

Additionally, the instructional aid who assists Pagan throughout the day is able to help her complete tasks that she may not be able to do otherwise, like checking out a camera properly and assembling the tripod. Pagan, though, is adamant about doing as much as she can on her own. Fiercely independent, Pagan will be the first to let anyone know what she is capable of.

“I always tell Ms. Maria and Ms. Courtney, ‘No! I can do it,’ because I can do things that other kids can. I don’t like it when people help too much because they think I can’t do something because I am disabled. I can take pictures just like the other students. I just have to do it different, but different isn’t bad,” Pagan said.

Becoming a yerd is a life-changing experience for many students. The opportunity to explore real-world skills, like communication, teamwork, collaboration and time management should not be limited to only those students with the drive to apply for a position on staff. The concept of what makes someone “good” at yearbook needs to broadened to include interest and desire. The Torch staff has been following the, “If you want to be here, we want to work with you,” policy and has reaped the benefits for the past several years. This welcoming concept also made Pagan’s transition onto staff easy—no one questioned why she was there, because she clearly wanted to be there.

A well-rounded yearbook staff should be composed of a variety of students, who all bring their own skills to the group. When students feel like they are valued by their peers, they are more dedicated to their work and have a sense of ownership over what they are completing. What that looks like for each staff is different, just as skills are going to look different with each student. But, like Pagan said, “different isn’t bad.”

“These kids are my family,” Pagan said. “When I come here, I feel happy because they don’t treat me differently. I love yearbook because you love your family. Your family takes care of you.”

Jessica Young, MJE, teaches photography and advises the yearbook and newspaper at Orange Glen High School in Escondido, Calif. Young was named a 2012 Rising Star by the Journalism Education Association (JEA). She is the President of the San Diego Journalism Education Association and was co-chair of the local committee for the JEA/NSPA Spring National High School Journalism Convention in San Diego in April 2014. Young also is a member of the Quill and Scroll board of trustees and directors.