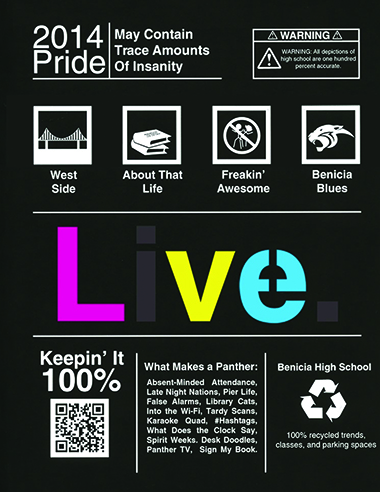 But 2014 was different. With their 2014 yearbook, the Benicia staff used Walsworth’s Yearbook 3D platform and the Aurasma app for the first time to add augmented reality to the book. The 2014 Pride included an animated cover and 20 trigger images and videos.

“(Distribution) was totally different,” said Kleinschmidt, who has since been promoted to vice principal at Benicia. “It’s like any problems there might have been with the book weren’t that bad, because people were so excited, and they saw how hard we worked. They saw that we were taking on something new and there was a whole new reveal.”

More Walsworth schools all over the country added the augmented reality experience to their yearbook in 2014, with stunning results. Students, parents, faculty and administrators are in awe that yearbook staffs have the ability to create these animations that jump off the page and spring to life.

“The response has been overwhelming,” said Tonia Eubanks, yearbook adviser at Manila High School in Manila, Ark., whose book used Yearbook 3D and Aurasma. “I took the book to our advisory board meeting and showed it. They were amazed. I’ve had parents say, ‘I didn’t know you could do that in a yearbook.’”

At Benicia, the augmented reality added to the 2014 book became an extensive project. Members of the yearbook staff coordinated with students from Benicia’s film production class to help create the videos needed. They promoted the videos on Vine. According to Kleinschmidt, the extra work did cause the staff to re-prioritize and shelve certain projects that would have been done in previous years. But the positive response has been worth it.

“Nothing replaces the yearbook. But by using the right technology, you can add to the book,” said Kleinschmidt. “(Yearbook 3D) is reaching out to kids who maybe wouldn’t be interested in a yearbook. It adds on to the excitement of yearbook and what it offers.”

Perhaps just as important, it provides yearbook students an opportunity to learn and train with video production and mobile apps.

“I’ve been teaching for 31 years, and the technology is always changing,” said Eubanks. “We have to change with it, because our students need to learn these tools. These are the tools they will be using in their careers.”