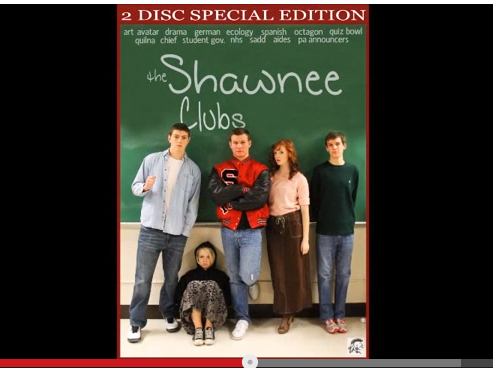 The yearbook staff at Shawnee High School in Lima, Ohio, always finds fun, creative ways to market and promote their yearbook. We’ve featured them before when they set up the YearBlinko game to draw in more buyers, and when they handed out goody bags of candy around Halloween.

Well, here’s some more great inspiration from Shawnee. The staff created their 2013 book around a movie-based theme called “Make a scene in 2013.” The entire book is filled with movie references. QR codes link to extra photos and short films. The division pages are all recreated famous movie posters with Shawnee students.

But it wasn’t just a creative theme idea. They found a way to make it a great marketing campaign that created a buzz about this year’s book. They set up movie-themed photo shoots with their students throughout the year, and advertised them in a variety of ways (over the PA, with posters in the halls).

Then the finished 11×17 posters were hung around the school to advertise the yearbook.  In addition, each student who took part in a photo shoot was given one of their posters.

“Needless to say, we had a ton of kids show up for the photo shoots and it was a lot of fun and a huge success,” said Shawnee adviser Brian Krawetzke.

Krawetzke said the excitement generated from the campaign led to 15 additional yearbook sales this year.

The last page of this year’s book provides an explanation of the inspiration behind the theme, and a link to a YouTube slide show with some of the movie posters.

[…] up with creative ways to get students hyped up about buying the yearbook. We’ve written about their efforts more than once here in the Yearbooks […]