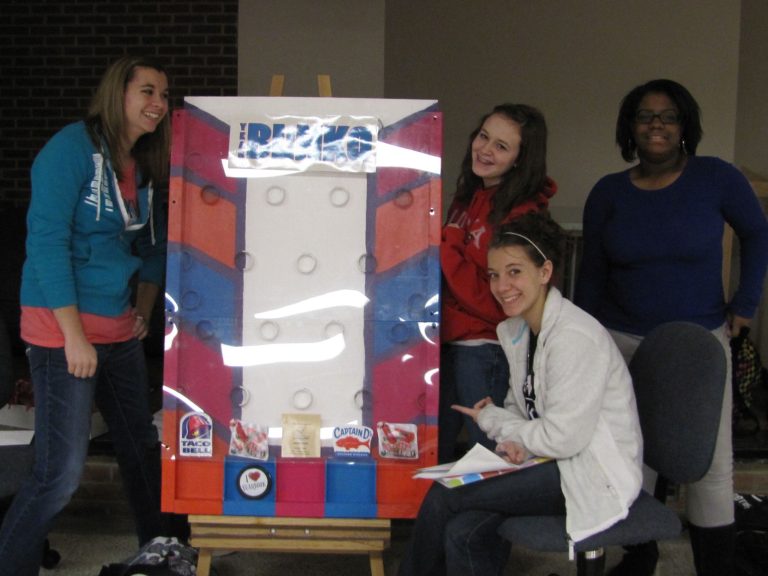 The yearbook staff from Shawnee High School in Lima, Ohio, recently sent us an idea for an awesome promotion they did to draw in more yearbook buyers.

Many people are probably familiar with the popular Price is Right game Plinko, where a puck is dropped down a pegboard and lands in a prize slot. The Shawnee staff created their own version of the game called YearBlinko.

The staff set up their YearBlinko board in the lunchroom and announced that anybody who purchased a yearbook was eligible to play the game. The slots on their board were labeled with prizes ranging from area fast food restaurant coupons to bags of candy. Everyone who purchased received one turn and was checked off the list.

The results: Shawnee added 75 additional buyers during the course of the YearBlinko promotion and got students excited about their yearbook!

If you want to give your own version of the YearBlinko promotion a try, it’s easy enough to create your own game board, or if the budget isn’t a problem you can buy one.

[…] in the tradition of creative marketing that led to YearBlinko, movie posters and Halloween candy giveaways, the yearbook staff at Shawnee High School in Lima, […]

[…] The yearbook staff at Shawnee High School in Lima, Ohio, loves marketing and promotions. They take it seriously, as we wrote about previously with their YearBlinko game. […]

[…] ways to get students hyped up about buying the yearbook. We’ve written about their efforts more than once here in the Yearbooks […]