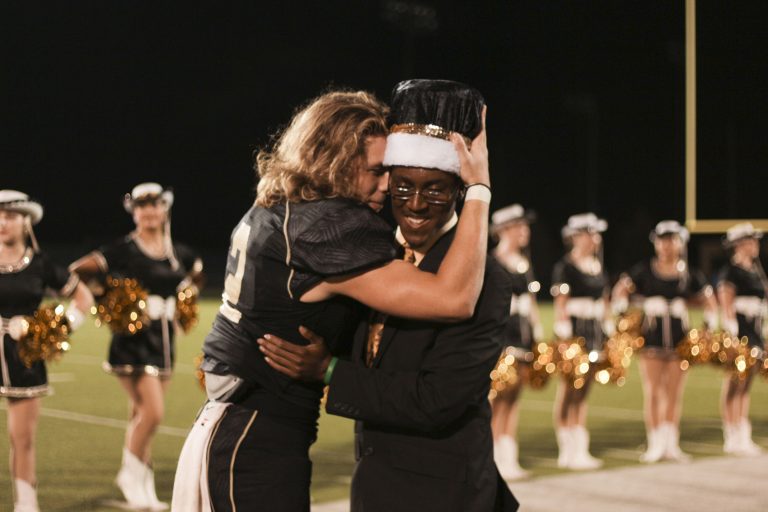 Covering the annual homecoming football game is standard business for yearbook staffs. Finding a unique, meaningful story from the event becomes the challenge.

That won’t be an issue this year for the staff at Walsworth Yearbooks school Fossil Ridge High School in Keller, Texas.

On Sept. 9, at halftime of Fossil Ridge’s homecoming game, football team quarterback Max Akin was elected Homecoming King. However, almost immediately upon winning, Akin shocked the crowd when he turned and emotionally handed the crown to his good friend K.L. Norwood, the football team manager who was standing next to him.

Norwood, who suffers from cerebral palsy, had also been a finalist for Homecoming King. The two friends then shared a hug, much to the delight of the crowd.

The feel-good story became big news immediately in the Dallas-Fort Worth area and beyond via social media, with photos and videos of the moment quickly going viral. Akin and Norwood were even invited to Los Angeles to appear on The Ellen Show earlier this week.

According to Winn Skinner, Fossil Ridge yearbook adviser, they staff every football game with four photographers and the now-famous Sept. 9 game was no different. However, there were lessons learned.

Still, Skinner said her staff did outstanding work that night and it’s been fun seeing the photos run by national outlets, including some photos taken by photog Vivian Hoang that appeared in the background when Akin and Norwood appeared on The Ellen Show.

“We got one that I love of Max holding K.L.’s head,” said Skinner. “It just really showed the emotion of the moment and the friendship those two have.”

The other valuable takeaway from the experience for the Fossil Ridge staff has been that you never know when a routine event like the homecoming game will become something bigger than you expect.

“We learned to upload our photos right away and know where they are, because we started getting media calls immediately after the game asking for photos,” said Skinner, with a laugh. “I would ask, ‘When’s your deadline?’ And they would say, ‘Right now.’ It was a wild couple days.”