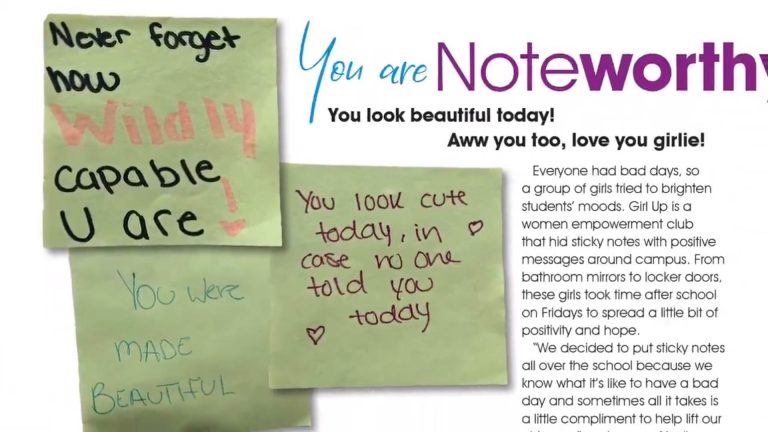 We’re all finding our new normal right now. There’s no playbook for how the yearbook should respond to a global pandemic that cancels schools for weeks or even months. This is a time that requires us to make our own playbook, and that’s just what the Lyman High School yearbook staff has done.

Like almost all schools, Lyman is not currently meeting in their building in Longwood, Florida, instead turning to virtual learning. What’s good for public health has been difficult for yearbook marketing that traditionally relied on in-school sales and marketing strategies. Adviser Danielle Pomeranz saw the impact the stay-at-home orders were having on her yearbook staff and the entire student body. That’s when she came up with the idea to create this promotional yearbook video they could share online.

“I haven’t ever created anything like this before,” Pomeranz said. “But, of course, we are in a time where we’re all using phrases like ‘never before’ and that is certainly true for the yearbook world. I wanted to create this video to give something back to our school community, which is really what yearbook is all about anyway.”

She enlisted the help of her writing editor and got to work, but insists that her staff members who provided the yearbook content deserve credit.

“The majority of the work was really done throughout the school year by our whole staff — deciding on a theme, writing meaningful copy and creating great spreads to highlight,” Pomeranz said. “That was the hard part. After I got the powerful narration from my writing editor, Victoria Alvarenga, I was on a mission to create the video. To put it together only took two days, but it was definitely a full two days!” 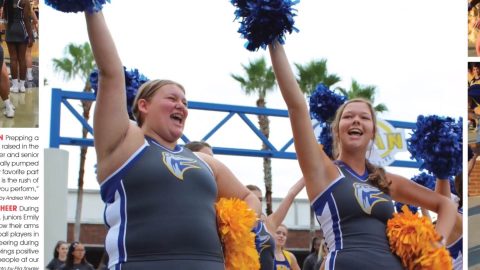 While Pomeranz was crafting the video with Alvarenga, the rest of the staff remained in the dark.

“The video came as a surprise to the rest of our staff,” editor-in-chief Andrea Woehr said. “Tori and Mrs. Pomeranz were the ones who thought of it, took initiative in creating it and then shared it with the rest of us. As we were wrapping up the book, we held numerous Zoom calls (due to COVID-19 and having to work from home), and I remember Mrs. P. saying she was working on a secret project and that she would soon send it to us all.”

Once the staff saw the video, it was hard to keep the emotions at bay. The video was a culmination of their efforts – a final preview of the finished yearbook made even more precious because of the events of 2020. The yearbook represented their year, their school, their community, their lives. The distance had only strengthened the knowledge that they were more than just a student body – they were family.

“Everyone [on staff] replied that they were brought to tears after watching it,” Woehr said. “We always joke that Tori [Victoria Alvarenga] is our own Morgan Freeman. She has this unique way with words, whether it be writing or speaking, that is soulful, heartfelt, and can bring anyone to tears. She is the definition of what it means to have a story come to life and the video exemplifies that completely.”

Alvarenga loved the idea but admits to being nervous about reading the copy, knowing that the people from school and in the community would hear her voice. She knew that this was too important to let her nerves get the best of though, so she pushed through. This video was her gift to the student body.

“For me, this video was important to make because I wanted students to know that they can get a finished yearbook to be able to hold onto a part of their lives that got cut short,” Alvarenga said.

Their Walsworth sales rep Lauren Wilhelm noted it’s more important now than ever before to recognize the many wonderful memories of the year – memories preserved in the yearbook that may otherwise be forgotten.

“Buying a yearbook will be, for some, the only way they can remember the calm before the chaos,” Wilhelm said. “I think that is what hits home about Lyman’s video, their opening and theme copy recalls to the first days of school, or the good times from the Fall, times that can be easily pushed aside during times like we are in right now.”

The video has promoted additional sales, something Pomeranz considers a bonus since they cannot rely on traditional in-school sales. However, the emotional pull is what makes the video so poignant.

“The video was originally intended as an advertisement and to increase sales, but I think it’s become so much more than that,” Woehr said. “Especially during the time that we’re in, it’s given our school something to look forward to, to be excited about.”

And excited they are. Woehr said that though it started as a simple marketing tactic, they are all shocked yet incredibly pleased by how well the video has been received. 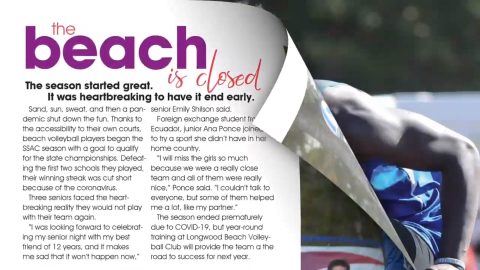 “The school response has been overwhelming,” Pomeranz said. “The video seems to be really resonating with our students and faculty. I was pretty excited to get a personal text from our principal, Mike Rice, about it. He definitely shed a tear when watching, which I think speaks to how invested he is with his students. We all miss them right now. I’ve been told so many people cried watching, that I’m a little afraid we’re inadvertently contributing to the tissue shortage!”

And it’s not just the student body who has been touched by this video – it’s the whole community. Alvarenga never realized how much of an impact the video would have.

“The overall response has been incredibly positive. I didn’t tell my family about the video, so when they first saw it, they loved it and shared it all over social media,” Alvarenga said. “Their followers began to leave sweet responses. Their responses made me emotional because although I love writing and know I have influence, I didn’t know that my words could bring those intense emotions out of people the way it did.”

Woehr believes part of the video’s success is due to their yearbook theme that tied in so perfectly.

“Our theme, ‘That Feeling When,’ intended for students to pause and reflect back on certain moments – anywhere from lighthearted to life changing,” Woehr said. “The video was able to take those moments that we wrote about and add a whole new element to them. That’s my favorite part about the video.”

Because of Wilhelm’s experience with the staff, she was hardly surprised to see their creativity and ingenuity on display.

“Every time I visit, I am amazed by the new ideas they have,” Wilhelm said. “Last year they came up with the idea to do gold gilding on book; this year they are doing a split cover order. They continue to raise the bar. When the adviser originally sent the video, it brought forth all kinds of emotion. They never cease to amaze me!”

Pomeranz emphasized the work ethic and dedication of her staff in producing and especially completing the yearbook. The staff didn’t know when they left for spring break that they would not return, but they never let that stop them. This video is simply an extension of their commitment.

“They completed things that I truly thought couldn’t be done,” Pomeranz said. “I thought we were going to have to print the sports team photos without listing the students’ names. I didn’t see a way we could ID the hundreds of students without being on campus. I had one editor, Emily Shilson, who said, ‘Let me try.’ She reached out to everyone – students, teachers, faculty – and within just a few short days, she had them all.”

This video and this yearbook were both a labor of love, but it was easy to be so invested when they believed in their product. They hope students will see themselves and the story of the 2020 school year reflected in the pages.

“The beauty of a yearbook is that each page is new story, and each page is a different experience for everyone who looks at it,” Pomeranz said. “I hope that each student can look through their yearbook and remember the feeling of celebrating at the events, studying in the classes and experiencing what it meant to be a Greyhound this year.”

Being a Greyhound is about being a part of something bigger than yourself and remembering what it feels like to belong. The year was cut short – precious memories felt stolen – but the year and the feelings will not be forgotten because of her staff.

“This is a historic year,” Pomeranz said. “It’s the kind of year students will tell their grandchildren about. Hopefully, my students will be able to pull out their yearbook to help them tell that story, and when they do, just maybe they’ll still remember ‘That Feeling When.’”

Victoria is my daughter and she has talents that exceed my wildest dreams. She is always raising the bar in her writing and my husband and I couldn’t be more proud. Thank for putting her talent out there and go Lyman Greyhound!

I LOVE THIS STORY! It covers everything we were feeling from happy to sad. The book became a challenge with everything else in the world right now but the whole staff really stepped up and work day and night to get this book done. 💓

Go Andrea!!! We are proud of you! Nanna and Pappy