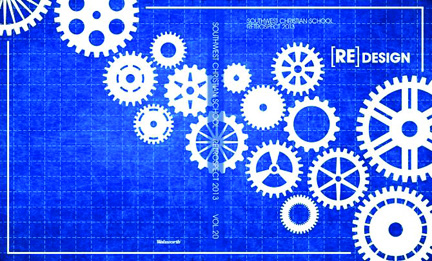 “They went bonkers,” said Roberts, the yearbook adviser at the small private school in Fort Worth, Texas. “Our school is big on integrating technology into our programs. So they loved it.”

That type of positive reaction has been common for the handful of schools that jumped on board as early adopters of the new Yearbook 3D augmented reality app in its first year. By simply downloading the free Yearbook 3D app from the App Store or Google Play, users were able to scan the cover or enhanced image on the inside of the book, and then view the video or animation through their smartphone.

Since it was more than halfway through the school year when Walsworth unveiled Yearbook 3D in January, most of the schools that used the app were well into production of their 2013 books. Themes were fully developed and staffs had to determine how they could incorporate Yearbook 3D with their ideas.

The Southwest Christian staff didn’t decide to use Yearbook 3D with their 2013 book until Roberts visited Walsworth’s Show-Me Seminar in April in Kansas City and got a closer look at the app. Roberts, who is also a technology teacher with a background in Flash animation, figured they could still make Yearbook 3D work even though the entire 2013 book was essentially already done and a spring ship date was fast approaching.

Thanks to Roberts’ background in Flash, that’s exactly what they were able to do.  The 2013 Southwest Christian yearbook used the theme “ReDesign” and featured a cover design with several gears on it.  The staff brainstormed the idea of putting the gears in motion, and Roberts was able to create the Flash animation to make that happen.  When students scan their cover, they see the gears start to move and then launch into a video montage of student photos from the year.

“Our students think it’s really cool,” said Roberts. “Parents, teachers and other adults actually seem to give an even bigger reaction. They can’t believe technology like this has come.”

West Morris Central High School in Chester, N.J., is another school that prides itself on being cutting edge and didn’t hesitate in using Yearbook 3D’s augmented reality with their 2013 book.

Working off that idea, Fabin said the West Morris Central staff wanted a cover animation with motion and some kind of explosion. The animation on the Talisman cover goes into motion with flying images of students and eventually ends with an exploding starburst.

“We fell in love with it the moment we saw it,” said Fabin.

The yearbook staff at Countryside High School in Clearwater, Fla., was about three-quarters of the way through their 2013 book when Walsworth yearbook rep David Hutcherson showed them Yearbook 3D. However, since they were still trying to settle on a final cover design, they seized on the opportunity to use the app.

Countryside’s theme was “Panoramic” and the cover design used an image of a camera lens set against a picture of a sunset. When the cover is scanned with Yearbook 3D, a custom video created by the staff showing a variety of student activities plays through the lens.

“The video is kind of a glimpse of everything that came together in our school during the year,” said Countryside editor Victoria Borneman. “We tried to use as many different people as possible.”

According to Roberts, the Yearbook 3D app will be vitally important since it bridges the printed book with the mobile technology that seems to be in the hands of every student.

“Technology like (Yearbook 3D) is extremely important to make the yearbook relevant. I think people still like having a book in their hands,” said Roberts. “Making a yearbook more interactive and more real is necessary.”