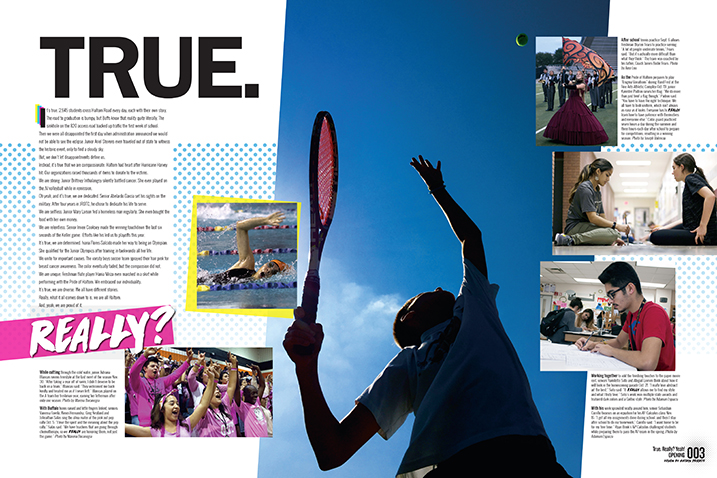 Let your theme inspire your coverage

A good theme never shuts up.

While theme shows up loudest on the pages dedicated to its explanation (opening spreads) and continuation (division pages), it should not fall silent in the rest of the book. Instead, theme should delicately permeate the entire book, like a whiff of perfume that you notice only as something pleasant rather than as a distinct smell. In that regard, theme should not influence what you cover, but how you cover it.

Any good theme must be reduced to its basic messages before its influence on coverage can be determined. A theme that has only one message probably needs to be reconsidered. A good theme needs to have several layers of interpretation. If it cannot be “onionized,” it is probably too superficial. 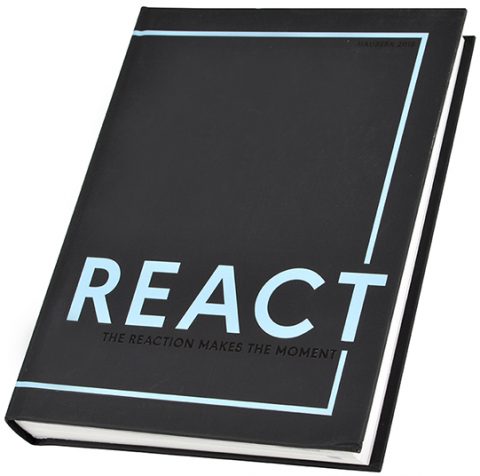 With their 2018 yearbook, the staff from Shawnee Mission East used the theme “React” because they felt it carried a clear meaning. Throughout the book, they showed people reacting to moments from the year.

For example, “All Mixed Up” could be restated as a theme about the confusion of being a teenager (which in itself offers several levels of interpretation) or just anything that causes students to feel mixed up (confusion in class, confusion about life, confusion about traditions, etc). Coverage could be influenced in a variety of ways.

A story on the new construction could look at all the ways students got lost on the first day. A story on relationships could focus on how you know whether you are really dating or just hanging out.

A spread could examine phrases parents say that they really don’t mean, like, “Have a great time!” which really means “be careful” and “call if you are going to be late,” which is in direct violation of the “be home by curfew” directive.

Perk up homecoming coverage with a sidebar on what influences students when voting for the homecoming queen, such as who they know, who they like best, who their friends are going to vote for, or who has the best dress.

Personality profiles would offer a good opportunity for this theme, such as a sophomore who is trying to decide whether to work for an IB diploma or take AP classes, or a student who is dealing with a major setback in life such as the death of a family member, an addiction or eating disorder, cancer or diabetes.

Faculty coverage could include a roundtable discussion of first-year teachers or teachers with babies who are working to balance teaching and family life.

The theme should not be limited to the cover and a few well-placed pages. Through the use of sidebars, headlines, photos and story angles, theme never needs to be silent.

Still need help with a theme idea? Take a look at Walsworth’s free eBook, The Big Book of Theme Ideas.

Susan Massy is the yearbook adviser at Shawnee Mission Northwest High School in Shawnee, Kan., where her Lair yearbook staffs have been demonstrating excellence in writing and design for the past two decades. The Lair recently won its 18th Pacemaker award from the National Scholastic Press Association under Massy’s guidance. In 1999, Massy was chosen the National Yearbook Adviser of the Year by the Journalism Education Association. In 2013, Massy was inducted into the Kansas Scholastic Press Association Hall of Fame.