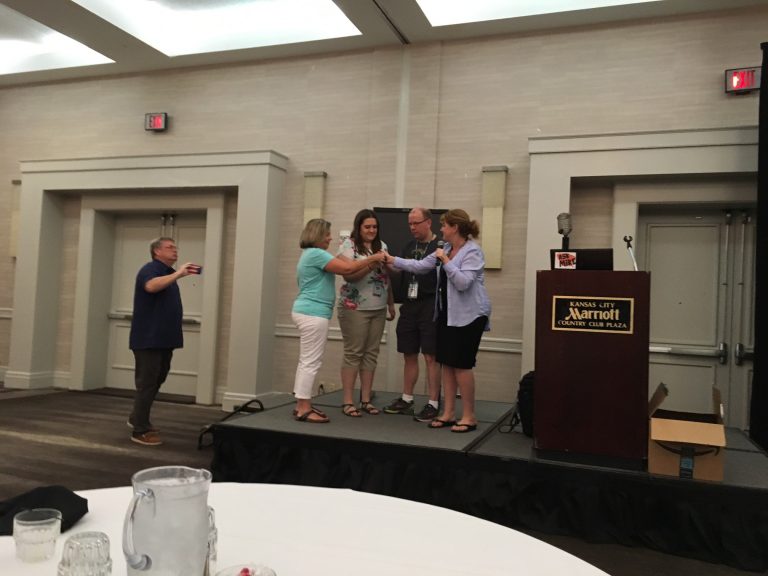 Once the almost 100 advisers in attendance had finished their eggs, potatoes and pancakes, Mike Taylor, CJE, kicked off day two of Walsworth’s Adviser Academy on Tuesday with a “Hello!” and an introduction of Rhonda O’Dea, CJE, Walsworth’s West area manager.

O’Dea introduced the group to “Massively Multi-Player Thumb Wrestling.” Everyone in the room joined in – a human chain of thumb-wrestling advisers and Walsworth employees wound through the ballroom. The winners’ prize: miniature wrestling rings.

Wearing one of his signature bowties – this one in an African print – he described his yearbook journey, from his grandmother’s appearance in a Walsworth-printed publication to his early teaching career and how he became a yearbook adviser in 1980. He took the crowd through his yearbook journey and the drastic changes he has seen through the years.

Jordan then moved on the benefits of having a mentor, which can be set up through Walsworth’s Adviser Mentor Program. Jordan explained how it works. Mentors who have three or more years of experience are paired with new yearbook advisers, and work as a complement to the Walsworth sales rep.

Jordan called Stephanie Bennett of Blair Oaks, Missouri, to the stage. She participated as a mentor in the 2017 school year. Bennett called it a positive experience over the last year.

Gwen Mauntel, an adviser at St. Francis Borgia Regional High School in Washington, Missouri, came to the podium to describe her experience as a mentee. She’d been having a rough year as a yearbook adviser, so Mauntel’s rep set her up with a nearby experienced adviser. After inundating her mentor with questions, Mauntel received answers and was able to work out the problems she was having with her students.

“Don’t be afraid to reach out,” she concluded.

Jordan then began recruiting – passing out notecards so Adviser Academy attendees could sign up. You can learn more about Jordan at Jamesmasonjordan.com.