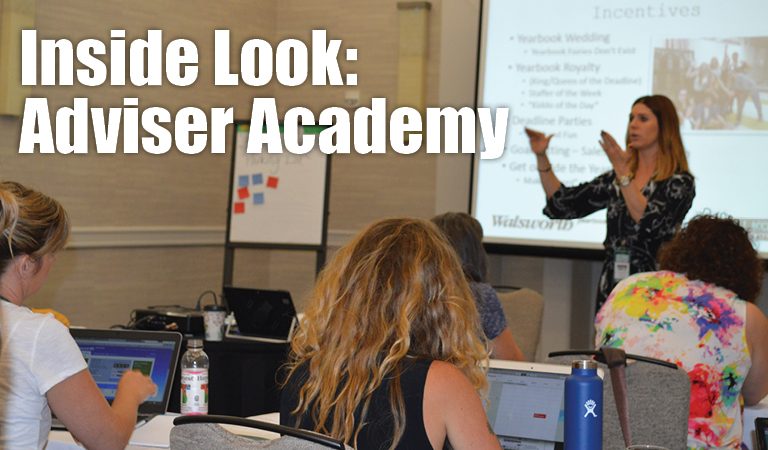 As Walsworth’s 2018 Adviser Academy approaches this July in Kansas City, the Yearbooks Blog has been getting you ready for the event with a new Inside Look at the Academy through a series of Q&As with the instructors.

Karen Johnson remembers when she was a brand new yearbook adviser 13 years ago. It was a bit intimidating.

“There was no one else to get help from,” said Johnson.

That’s a big part of the reason why Johnson, now the veteran adviser at Kearney High School in Kearney, Missouri, enjoys being one of the tech trainers at Walsworth’s Adviser Academy. It’s a chance to help those first-year teachers in need.

With the Academy now only one week away, we spoke with Johnson about her career, the summer and what she’ll specifically be teaching at the Academy.

This is my second year at Kearney. I’ve been teaching for 15 years, and 13 as an adviser.

Where did you teach before you came to Kearney?

How did you get into yearbook?

I was actually one of the crazy ones who did it by choice (laughs). I never really did yearbook in high school. I was one of those who had the upper level courses, and was just like, “Well I don’t have the time.” But when I got into college (at University of Central Missouri), I knew I wanted to do a secondary ed degree and I was kind of just doing the process of elimination of what I’d really like to do and I landed on English. I was figuring out what I wanted to pair that with, and I eventually landed on journalism…

When you think back to when you were a new adviser, what was the learning curve like? What kind of training opportunities did you have?

I had been set up really well getting to student teach yearbook. I learned a lot with that. But when I first taught, my very first year, I was at a really small school – Pattonsburg, Missouri. There was no one else to get help from, or anything like that. So camp opportunities, like the student media camp with Walsworth. Just connections with other advisers, and now Walsworth has that great mentor program.

How do you prioritize the summer as an adviser? What’s the most important thing – rest and recharge or take care of work that still needs to get done?

Right now I’m at a fall delivery book, so the first thing was to finish our book and get that submitted. After that, find some balance. Try to take a break, but also participate in some of these things like Adviser Academy and later in July I’ll be at camp with some kids. So taking some time to relax, but you’re also always alert and looking at things around you and getting ideas for next year.

Specifically, what will you be teaching at Adviser Academy?

I’ll be teaching the new adviser InDesign class, which I’m excited about. I was lucky (when she was a new adviser) in that I had some background in Quark. But it was a learning curve to figure out InDesign and everything that came with it. And really, every year I teach, I learn something new that helps us and I say, “Ah, I wish I would have known that when I started.” So that’s actually part of what I do in my session is present 10 things I wish I would have known. Which are just kind of those shortcut kind of ways to do some stuff. So I’m excited to share that with new teachers.

When talking to new advisers, what do you think should be their top priority in those first couple years?

That’s a good question. What’s hard about yearbook is there are so many different things to learn. I think in those first few years you have to figure out what’s the structure that you’re going to use with your staff. Not necessarily I’m always going to have an editor-in-chief, but what is your structure that you’re going to give them that they can work within to be successful. Just figuring out what that is that’s going to work for you and work for kids to make a quality product.