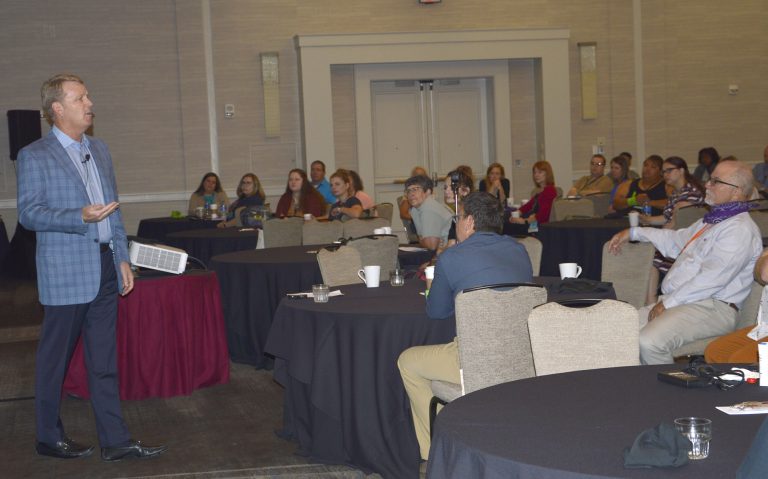 He shared two histories: the company history and his own personal story.

The company was started by Walsworth’s grandfather in 1937. His grandmother was a dancer, and the couple would travel around for county fairs and community plays. That’s how his grandfather got into printing: he created playbills for these productions. Eventually, the original Walsworth moved on to memorial books for World War II soldiers, then expanded into the yearbook business in 1947.

President Don Walsworth’s father, CEO Don O. Walsworth, played a major part in growing the company once he took over. He was the leader behind the creation of Walsworth’s commercial division, which helps keep Marceline and Brookfield residents busy during the yearbook off season.

“Our goal is to keep our 1,000 employees, many in rural communities, employed,” he said.

Don shared the company’s FIRST values: Fun, Integrity, Respect, Safety and Teamwork. He explained that they are a core piece of the company and explained how each relates to yearbook customers. He also shared the company mission statement of “Creating value for our customers, employees and communities,” and how that affects everything done at Walsworth.

Don Walsworth grew up in Marceline, working at the plant as needed. He played golf from a young age, and he and his father passed the time by hitting the course, which he joked was more of a cow field. Walsworth practiced and work hard to improve his game and eventually got a golf scholarship to Stanford University, where he earned a degree in economics.

After graduation, Walsworth played professional golf for four years. “I got to play all around the world. It was great.”

After marrying his wife in 1992, and welcoming children to the world in 1997 and 1999, he knew it was time to change his professional goals.

“I wanted to be there for the dance recitals and the soccer games and all that,” he explained.

One day, at a tournament in Sioux City, Iowa, Walsworth had a revelation, “It was like I was struck by a bolt of lightning.”

He realized his personal goals, like being there for his family, were more important than his professional goals. He always loved yearbooks, and knew it was time to come back to the family business.

Walsworth finished his speech with a challenge for the yearbook advisers in attendance: “Find your yearbook story.”