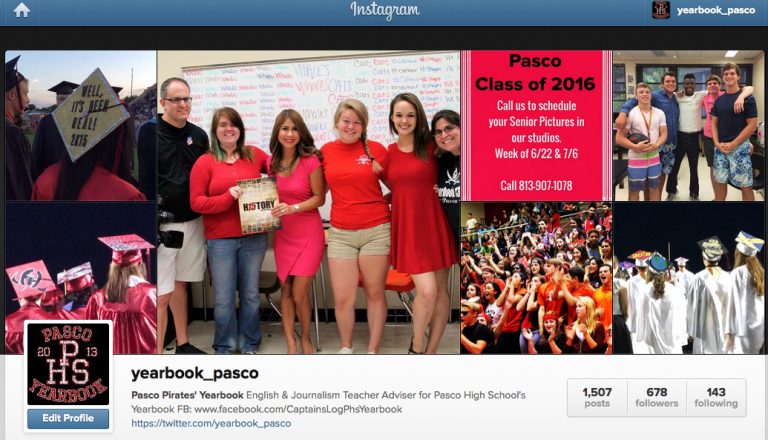 What’s the buzz? It could be your yearbook if you are using social media correctly.

Social media can transform student engagement with your yearbook in positive ways and help increase sales, but it takes oversight and dedication.

First, decide who will do the posting.

At Pasco High School in Dade City, Fla., Rebekah Wallace, the yearbook adviser, does the posting to social media for the yearbook instead of one of her students.

“I feel that a social media site that represents the yearbook is a professional platform. Even though many posts are light and fun, anything construed as negative could go viral, and come back and reflect poorly on the yearbook program and ultimately the school,” Wallace said.

At Rider High School in Wichita Falls, Texas, two students are assigned to post to social media throughout the year, and Mary Beth Lee, the yearbook adviser, has the social media accounts set up on her phone for oversight. 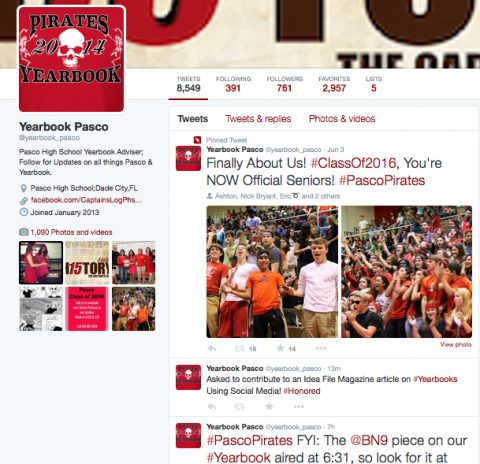 “I can see where it could be a problem if everyone on staff posted to social media,” Lee said.

Next, since your audiences are mostly parents and students, know where they go online.

Parents and teachers use Facebook, so Wallace and Lee disseminate information there about deadlines, prices and picture days. Instagram has a mix of parents, teachers and students, but students are most active. Instagram is for photos and videos only, so users are visiting because that’s what they want to see.

The student body mostly hangs out on Twitter, which Wallace described as fast-paced and brief since tweets can only be 140 characters. Adding photos to a tweet uses up 23 characters, but up to four photos can be added to a tweet, she said.

“I usually try to add a photo to tweets because they are more eye-catching and get more attention. Since the Twitter timeline is updating by the second, I have to catch my audience’s eye, and the best way to do that is with a photo of themselves and their friends,” Wallace said.

Both advisers have the feature set up where a post to one site will share it with their other sites, saving time.

Lee said her social media editors helped her understand the need to post after 3 p.m. when school gets out. And, they want to tweet enough that they are in timelines on a regular basis.

Wallace has the profanity filter set to high on Facebook, and she gets notification of community comments so she can review them first in case they are uncomplimentary. Twitter’s filters are different, so if something negative is posted, she addresses the issue or stops rumors to clear up problems. On Instagram, she just deletes any inappropriate photos.

“Honestly, I have had few problems with bad social media press, and I think this is because students know I run the site, and not one of their peers. Overall, these sites are for the students, and they love to see that I posted photos of them, their teams, their clubs, and their friends, from there they keep the chatter positive and tag one another in the yearbook posts,” Wallace said.

The goal of Pasco yearbook’s social media is to entertain and inform, Wallace said. Wallace will post photos and updates of events being covered; for example, she will take a few photos of the student section at a football game and post them, or post staffers’ photos of whatever they are covering.

“What it does for my audience is give them the sense that the yearbook is everywhere. It shows students that the yearbook is not just at the popular sporting events; we are at their small after-school clubs, drama rehearsals, and in classrooms. In short, social media is used to showcase the students and various activities that they are involved in. Yearbook social media is like the bragging parents who want to show off what their kids are doing.”

Both yearbook staffs do sneak peeks of the book. One of those, at Rider High, was a secret book reveal for seniors on Twitter and Instagram the night before the book came out. 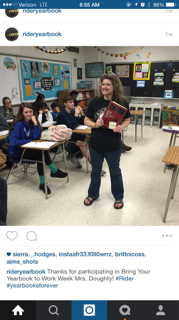 Both schools also use social media for marketing announcements, including countdowns of the number of books available. At Rider, the staff posted photos of staff members with the book, the book itself and photos from the book. Staff members retweeted those posts and posted screen shots of them on Instagram for the first three days of post-distribution sales. All that effort increased sales, Lee said.

Last year, Rider’s staff experimented with different fun activities to see how they would work.

“In one teacher’s class, the students wrote some of the messages on his white boards so when people came in they saw yearbook messages from his high school years. It was hilarious. I don’t know if that translated to sales or not, but it was fun,” Lee said.

All 16 teachers received a yearbook and most of those teachers gave their books to deserving seniors who hadn’t been able to purchase a book. Lee said it was a rewarding experiment that she hopes they can repeat this school year.

During this school year Lee said the staff at Rider plans more publicity for the “Take a picture with your yearbook” contest; do the “Bring Your Yearbook to Work Week” for teachers again; consider using Yearbook Shout again; post more yearbook previews; and work on tweeting enough that the yearbook is in timelines on a regular basis.

At Pasco, Wallace said she will have to adapt and follow the audience as social media evolves. She began using Snapchat this fall, trying it out with sneak peeks and special promotions. She also said she planned to set up a Remind account for yearbook information so students can receive important yearbook alerts. The Remind app sends text message alerts to students and parents without divulging their cell phone number. She had accounts for her yearbook staff and her English classes last year. She said this app would cover students and parents who do not have social media accounts but do text.