Progress hasn’t been easy, but has been steady for Williamsville North staff December 15, 2017 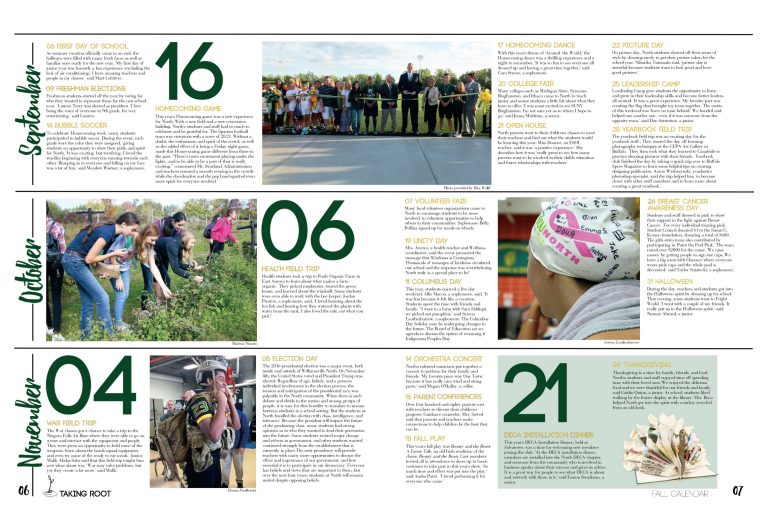 Progress hasn’t been easy, but has been steady for Williamsville North staff

A yearbook makeover is hard work. When the yearbook staff at Williamsville North High School in Williamsville, New York, made the change, they faced a year of hard work, new ideas and some opposition from the community.

But the end product, a more comprehensive, journalistic yearbook, was worth it.

The yearbook at Williamsville North High School had been the same for as long as anyone could remember. It was heavy on pictures, with little or no writing. When it changed, not everyone was happy, but it ended up being good for the school and students.

“Before the 2017 book, it was basically just a photobook,” said, Erin Devantier, yearbook adviser.

She’d been an adviser to the yearbook club for years and hadn’t even considered that there might be another way of doing yearbook.

“I really had no guidance or direction,” she said. “We were encouraged to just throw as many pictures as we can on the book. We didn’t caption anything, we had no stories.”

Devantier had no plans to change the style of yearbook, but started considering new printers after a parent requested she find a way to lower the $90 price tag.

Devantier switched to Walsworth. Once Smith introduced her to the concept of a journalistic yearbook, Devantier brought in her school’s English teacher, Kaitlin Curcio, as a co-adviser.

Smith persuaded Devantier and Curcio to attend Adviser Academy, which was a big eye opener.

“We were shocked. We didn’t realize yearbooks were so big and that there were all these parts to it,” said Devantier. She’d never encountered layouts, design and theme, or considered incorporating journalism into the yearbook.

The Williamsville North advisers knew their students were capable of creating a more journalistic yearbook; they just needed a push.

Support from the administration ended up being vital to their efforts. Not only were they able to switch to Walsworth, add a journalism class and revamp the school’s yearbook, but their principal even fielded calls from parents who were disgruntled with the changes.

“Why is there so much writing?”

According to Devantier, one email expressed concern that it looked more like a magazine layout than a yearbook layout. Others asked why they included a piece about the 2016 election. Devantier had an easy answer to that.

“When you reflect on the book in 20 years, you remember, ‘Oh my gosh, the Trump election, the presidential election, that went on that year,’” she said. “But I think, because it was new to our school, they weren’t used to it, so it was a shock to them.”

When complaints came in, the school principal tempered their sting.

“He reminded us of something interesting about yearbooks. We have 1,300 students at our school, but each student brings that yearbook home to a family of about four people. So it reaches over 5,000, 6,000 people; but of that number, only 50 or so voiced negative opinions. So, overwhelmingly, it is the other side. Sometimes you don’t hear the positive comments right away,” said Curcio.

Writing for the Future

The advisers keep reminding themselves that people don’t like change, but in a year or two they’ll be used to the new style of yearbook.

“And that’s what they’re going to come to expect when they see the yearbook,” said Devantier.

Devantier and Curcio are confident that current students will be grateful for the journalistic style when they look back.

“I think, for a lot of the students, they’ll see the value in the writing in 10 years when they can remember the story behind the trips they took or the concerts they had or the championships they won,” said Curcio. 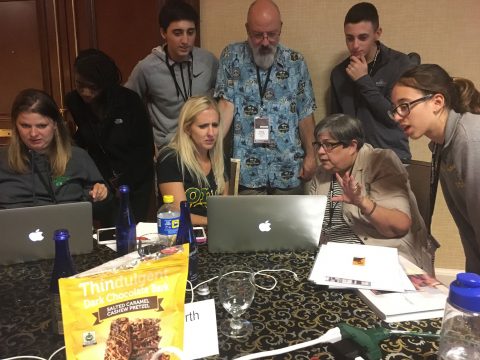 The Williamsville North yearbook staff works on their 2018 book with instructors at Walsworth’s Elite Weekend in Washington, D.C. in October. (Photo by Mike Taylor)

To be fair to the complainers, they may have never seen a journalistic yearbook before. Williamsville North High School is located near Buffalo, New York, where most yearbooks are created in a club, not a class and contain mostly photographs with few captions and no written articles.

“So you have advisers, like I was, that have no idea and we just want to get the book done, and we’ll put anything on the pages,” Devantier said. “Just pictures, because it’s so much easier just to fill a page with pictures than it is to find the story behind the pictures and reach out to journalism students to have them get quotes and captions from all the kids.”

Devantier and Curcio have considered transitioning from a yearbook club to a class. The school principal is supportive, but due to curriculum, time and budget restrictions, can’t guarantee that they’d be the ones teaching the class. The advisers aren’t quite willing to take that risk.

Devantier and Curcio apprised their school’s staff of the upcoming changes from the start of the school year.

Their theme, “Growth,” reflected those intentions. They were growing into a more expansive yearbook. The year also reflected a growth in leadership. Devantier had brought in Curcio once she realized they needed more journalism. The club itself was growing, too.

“When I first started 13 years ago, it was myself and the two kids who made the book,” said Devantier. “Now we have a staff of about 60 kids.”

The theme also reflected changes at the school as a whole. A multi-million dollar sports complex was added during the year and two new administrators joined the district.

The yearbook staff has taken the massive changes in stride. In her journalism class, Curcio gives yearbook staffers the option of working on yearbook assignments, but they often choose to write about other topics because they’re enjoying the journalistic process.

“They’re really embracing the process of going through interviewing and research and writing up feature articles. No matter what the topic, we have a lot of really dedicated writers on our staff,” she said. “I think they’ve really grown with writing captions, going out and interviewing to get quotes from students, and having to talk and interact with students that they may not work with on a daily basis. I think it’s helped our staff as a whole.”

Curcio, Devantier and the yearbook staff are working to make this new journalistic style of yearbook even better than the previous year’s. They took in feedback about last year’s book and they’re finding ways to add in elements that were missing.

The administration continues to provide support. Despite club field trips being against district policy, their principal rallied to allow the yearbook club to attend an Elite Weekend. They made it and it helped them get a jump on the year.

The 2018 yearbook theme is “One North,” a play on the “One Buffalo” theme that is prominent in their area.

“We’re one school, one community, one class,” said Devantier.