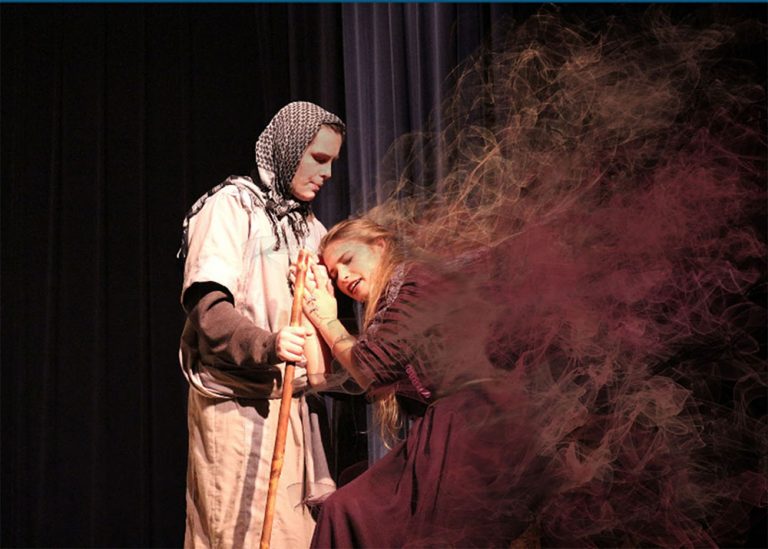 Journalism, whether written word or photographic image, cuts a window in which to see clearly the dark complexities of our world. Truth is the frame around that window. Without truth and the trust that derives from it, the noble profession and service of journalism in high school or society as a whole becomes a wasted exercise in killing trees.

The death of Pulitzer Prize-winning photojournalist Eddie Adams in 2004 always reminded me of this. I was in high school in 1968 when his photo of the South Vietnamese police officer executing a captured Viet Cong at point blank range was published. It was only one photo, but the truth of that single image tinged the consciousness of the nation with the horror and complexities of the war in Vietnam.

Eddie Adams had difficulty showing his famous Vietnam image in workshops over the years. Truth is often troubling, not just for the viewer, but for the truth-teller as well. Yet, it is the journalist’s job to report the truth.

Today, the credibility and ethics of scholastic photojournalists are constantly being tested by the wonderful technology of Photoshop. This program has revolutionized the handling of photo images in yearbooks across the country. However, along with the advantages Photoshop brings, it also has the power to alter what appears to be true and entices old and new photographers to bend their ethical standards as truth-tellers.

The power of Photoshop

If your staff has not already taken a hard stand on the ethical use of Photoshop and photographic standards in general in your publications, now is the time. Understand that unethical photo manipulation has been with us since the dawn of daguerreotypes. Matthew Brady moved bodies to enhance Civil War photos. During the McCarthy hearings of the 1950s, photos were cropped in ways to make it appear that certain people seemed to be associating with “known Communists.”

The digital misuse of photos allowed The National Geographic to move the pyramids of Egypt and the Day in the Life book editors to “scrunch” a large horizontal photo so that it fit on the vertical cover of a book. Very famously in 1989, the St. Louis Post-Dispatch ran a photo honoring the newspaper’s Pulitzer Prize-winning photographer and it became more infamous for the Diet Coke can that was digitally removed from the picture.

And these are professional examples!

High school photojournalism has had its own lapses over the years. I remember one national convention in the pre-Photoshop days where there was a session showing students how to sandwich negatives, cut and paste images, and place quarters on printing paper to simulate volleyballs all to cover the fact that the photographer had not captured the shot in the first place. Truth and ethics were not on any of the presenter’s handouts.

Probably the biggest ethical problem over the years for scholastic photographers is the idea that it is OK to set up shots. Don’t confuse this with planning your coverage of an event and being prepared for a shoot, which is obviously fine. For example, it’s OK to move yourself to get at different angles for a photo. It’s not OK to move objects around when you’re at an event to change the story.

Advisers need to set the tone for ethical standards on publication staffs, whether they use Photoshop or not. They need to work with editors to print a guidebook that sets the bar for legal and ethical issues. Here are some areas of concern that most professional publications address in their photo guidebooks:

When I was an adviser, ethical violations over the years could result with the student’s dismissal from staff. Sometimes putting the student on a non-publishing track in the class was the best approach, allowing the student to be “off staff” and yet take assignments that would be graded but never published. Presented with that scenario, some students would drop staff on their own.

My philosophy was that writers and photographers do not publish in a vacuum. Journalism is not just a classroom activity. Their ethical lapses have consequences and the integrity of the rest of the staff should not suffer as a result.

Advisers have to decide the impact of rules violations on students’ grades and tenure on staff. All of this – guidelines and consequences – should be clearly stated in the staff manual.

Today, Photoshop demands an even more clearly stated set of standards for what is appropriate manipulation of images.

On yearbookhelp.com, Walsworth provides some excellent guidelines on how to prepare images for publication. These guidelines give a step-by-step approach to managing resolution of the image, cropping, tonal adjustments, and sharpness to make photos look good on the yearbook spread.

However, bright kids already have discovered the ease with which Photoshop allows them to replace heads on bodies in pictures or place individuals in a different setting. Missed the bus for the field trip to the zoo? Simple, a zoo background and students shot at school and COB’ed can easily be blended.

It simply is not ethical. And just as truth has a permeating effect, so does dishonesty. Once you allow such manipulation to be passed off as legitimate photojournalism, it will be hard to get that genie back in the bottle.

Here is an example of some Ethical Guidelines from selected professional organizations:

The Washington Post
Photographs are trusted by our readers to be an accurate recording of an event. Alteration of photographs in a way so as to mislead, confuse or otherwise misrepresent the accuracy of those events is strictly prohibited.

The Kansas City Star
It’s the Star’s policy that any content alteration of news photographs is unacceptable. We do not concoct news photographs and try to pass them off as reality…Photojournalists should not set-up, re-create, direct, or otherwise intrude on the reality of an event. Direction is allowed for situations such as portraits, fashion, studio work, and photo illustration and should be obvious to the viewer.

The National Press Photographers Association
Photojournalists operate as trustees of the public. Our primary role is to report visually on the significant events and on the varied viewpoints in our common world. Our primary goal is the faithful and comprehensive depiction of the subject at hand. As photojournalists, we have the responsibility to document society and to preserve its history through images.

Stan Grossfeld, Pulitzer Prize-winning photographer, Boston Globe
Burning is really to redirect the eye to the center of the image, not to eliminate content. You have to be true to the reader about what you witnessed.

For more information on ethics, including the full text of the guidelines of these organizations, go to poynter.org.

2 Responses to “Photoshop, Photos and Ethics”

I love your post, thought I’d say check these guys out!

Bill Hankins taught scholastic photojournalism for 26 years, advised student publications for 29 years, and instructed more than 1,600 photojournalists, mostly at Oak Park High School in Kansas City. Before retiring, Hankins received the Missouri Journalism Teacher of the Year Award, the Pioneer Award from the NSPA, the Certificate of Merit from the Dow Jones Newspaper Fund and a Lifetime Achievement Award in 2002 from the JEA.