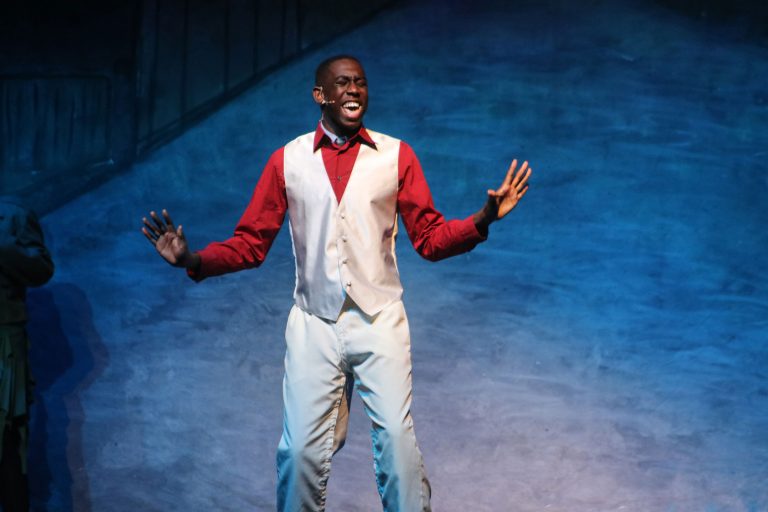 Photo Quest – The play’s the thing

Much like shooting sports photos, capturing the peak moments in plays and musicals requires planning and good shooting technique.

To paraphrase Hamlet, “the play’s the thing” where the conscientiousness of the yearbook photographer is discovered.

At most schools, there will be spring plays and musicals in the coming months ahead, which will provide an opportunity to try out the ideas and techniques discussed here.

There are a number of reasons shooting plays and musicals are challenging. Foremost, there are limits as to when and where you can shoot. Read most stage production programs, and somewhere a warning will read: “No still photos or video photography allowed.” Because of that limitation during live performances, it is imperative to work with your drama teacher or vocal/instrumental director to gain access during dress rehearsals for the school productions.

By communicating ahead of time, the photographer probably will not be stuck in some out-of-the-way shooting locale. You really want total access, including being on stage. When necessary, the photographer might need to get permission to bring a small step ladder into the theatre if there is a raised stage. The shooter would not want all of the shots to be looking up the actors’ noses.

Remember that a dress rehearsal can be a stressful time for all the cast, crew and director, so make sure that the yearbook shooters go in, do their jobs, and do not interfere with the production. When I was the yearbook adviser at Oak Park High School in Kansas City, Missouri, my photo editors would usually assign two photographers to each production. These photographers would shoot the dress rehearsal or rehearsals if more than one was scheduled. Often the photographers would shoot one rehearsal, see what they got, and then go back the next night to capture what they had missed the first time. 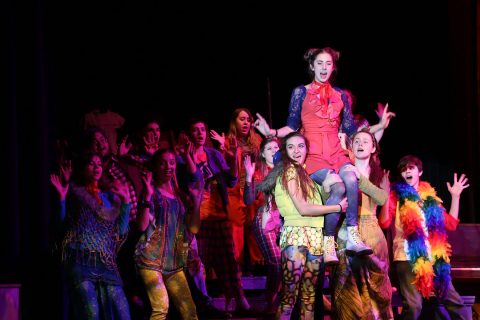 However, the real tool for successful play and musical photography begins prior to the dress rehearsal when the photographers, photo editors and reporter discuss the nature of the production and decide what key scenes, actors and behind the scene stories must be shot.

For example, when Oak Park staged Macbeth one year, the photographers knew there were many key scenes to the drama. One scene was pivotal to the dramatic story – the witches’scene – “Bubble, bubble, toil, and trouble.” That early scene gave foreshadowing of the tragedy that would follow.

Other important scenes included soliloquies by Macbeth and Lady Macbeth, plus a famed death scene. In scenes like these, composition matters, so the photographer needs to plan ahead and be in the best location to get the most telling shot. If you miss the moment, it is highly unlikely that the director will want to call a time out in the dress rehearsal while the photographer gets his or her act together.

Another consideration for the photographer is how these images will look on the yearbook spread. Certainly, variety of images is a concern. For example, five images on a spread that are all shots of single actors would be boring. Distance from the subjects is a concern as well.

To capture a variety of story-telling images, the photographers should record the following types of shots:

These are just suggestions and will vary according to the type of play or musical being performed. Another area of concern in telling the whole story is the action behind the scenes – makeup, sound, sets, tickets, publicity, etc. – and the pit orchestra if the production is a musical.In fact, if the production is large enough to warrant the coverage, staffs might decide to have two spreads, one for the performance itself and another to cover the story behind the scenes or some other related story of interest.

Once you have planned your coverage and some of your needed shots, it is time to think about the technical aspects of shooting a stage production.

If you have to, use a flash. If your flash allows you to tilt the head and bounce the flash, then do that to cut down on the red eye and distortion that can happen with direct flash exposures. 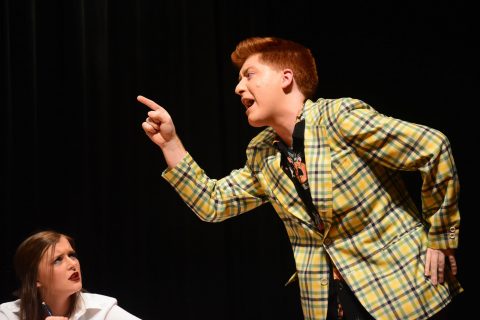 Flash use can cause the following problems:

Photographer Chris Oberholtz, who has worked for publications that include The Kansas City Star, gets occasional assignments to shoot plays or concerts. Some of his experiences shooting plays in high school were not that much different than professional assignments.

“I speak with the director or stage manager before the dress rehearsal to discuss the nature of the play,” Oberholtz said. “I am looking for one image that says what the play is all about.

“Often I will get there 45 minutes early and spend some time shooting behind the scenes. Sometimes you can get pretty nice moments,” he said.

Oberholtz likes to use the existing light of a production if possible. He will sometimes move behind the stage to get the dramatic lighting on his subjects from the spotlights.

His biggest difficulty is getting lighting that seems natural. Even if shooting a rehearsal where flash is allowed, he will make sure to put his strobe off camera, not direct.

From that point, it is a matter of composition and key moments. Sometimes it is characters dancing or laughing or arguing.

“I am always looking for a nice moment to make the image compelling,” Oberholtz said.

One Response to “Photo Quest – The play’s the thing”

This article was very enlightening and helped me grow as a yearbook editor.

Bill Hankins taught scholastic photojournalism for 26 years, advised student publications for 29 years, and instructed more than 1,600 photojournalists, mostly at Oak Park High School in Kansas City. Before retiring, Hankins received the Missouri Journalism Teacher of the Year Award, the Pioneer Award from the NSPA, the Certificate of Merit from the Dow Jones Newspaper Fund and a Lifetime Achievement Award in 2002 from the JEA.