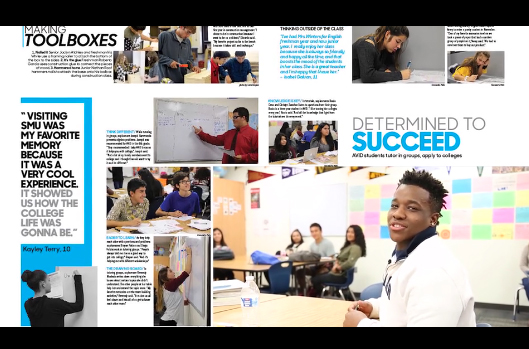 The yearbook staff at McKinney High School in McKinney, Texas, has given a late boost to their book sales this year, with the help of a fun, well-produced video that promoted this year’s yearbook theme and went viral around school.

The McKinney staff created a commercial that aired at the end of MHS1, the school’s monthly video news broadcast. According to Alyssa Boehringer, who is adviser of both the yearbook and MHS1, the video was a collaborative effort between one of the yearbook editors and one of the broadcast producers.

The video takes several spreads from the 2017 yearbook, which is themed “Out of the Blue,” and turns them into animated GIFs.

“We normally do some type of yearbook promotion every year. Some more successful than others over the years, but the kids were pretty proud of this one,” said Boehringer.

Boehringer said yearbook staffers also added a Twitter countdown to distribution on the staff’s account @manestreamnews, where yearbook photos turn into animated gifs in a similar style to the commercial.

“We definitely noticed an increase in sales as well as buzz about the book after the commercial aired a week ago,” said Boehringer.

Since the commercial’s initial airing on May 5, McKinney has sold 70 additional yearbooks.

Watch the commercial below!

Out of the Blue from Manestream News on Vimeo.