Let there be light on basketball December 10, 2010 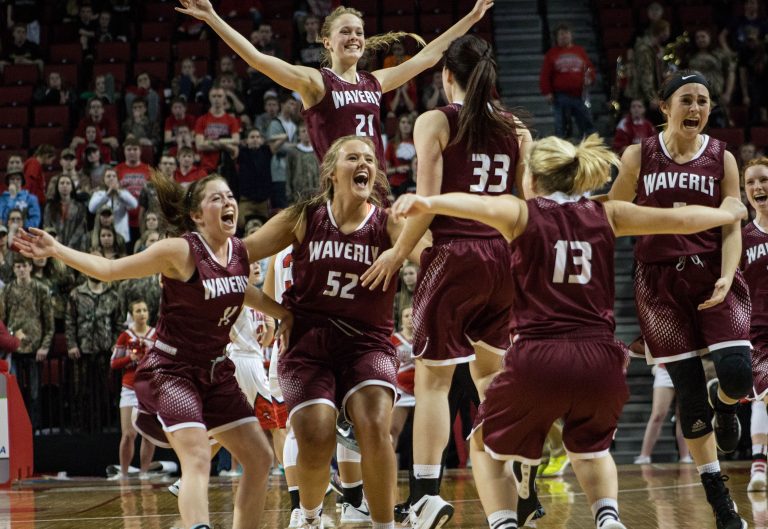 Let there be light on basketball

You may be covering an action-packed game, but you will get few good images for your yearbook unless you learn how to shoot action in the lights of a gym.

Taking photos of basketball has corrupted me. I no longer take pleasure in watching three-point shots from mid-court, or players carelessly traveling, or coaches screaming at the top of their lungs.

I watch for moments when the players move into good light at peak action.

After all, photography is painting with light and all photographs depend on photographers knowing how to manipulate the light.

Unfortunately, basketball, while filled with spectacular action and player/coach/fan reaction, is plagued with harsh, overhead light – and usually not enough of it. Learning about light, whether it is for basketball or any other situation, means understanding some fundamental concepts: quantity, quality and direction.

Quantity – Is there enough light?

Having enough light is first and foremost on every sports photographer’s mind.

Shooting fast action like basketball requires fast shutter speeds. That means the shutter cannot be open long enough to let in much light and photographers have to compensate by opening up the aperture to let in enough light to properly expose the image. However, in most high school gymnasiums, even opening to f/2.8 will not allow enough light to properly expose the fast action. And few high school photographers have lenses that open up to f/2.8. Most only have lenses that, at their maximum, open up to f/4.

When buying or renting a lens, cost and maximum aperture are related. The wider the maximum aperture, the more expensive the lens. The wider the maximum aperture, the more light the lens will let in and the more appropriate it is for shooting in low-light situations. Indeed, consumers considering buying a new camera should look more closely at the quality of the lens than buying a high-end camera with a lot of bells and whistles that will not ultimately contribute to image quality. Price and lens quality are directly related. A good lens for shooting sports is both fast (i.e., has a low-numbered maximum aperture such as f/2.8) and long (200mm or longer).

Good lenses from name-brand manufacturers such as Nikon, Canon, Sigma and Tamron sell 70-200mm f/2.8 lenses, for example, for about $750. While shooting sports such as soccer and football will require even longer lenses, a 70-200mm f/2.8 zoom is good starting point.

So to use even a reasonable shutter speed for shooting fast action at f/4, photographers have to shoot extremely high ISOs – 800 or higher. The higher the ISO, the more sensitive the CCD is to light, but the lower quality the image is. When shooting sports, however, a fast shutter speed is a necessity, so often a little image quality in terms of increased grain must be sacrificed to stop the action. New cameras have ISO settings as high as ISO3200 and have reasonable image quality up to ISO1600. Point-and-shoot cameras, however, rarely go beyond ISO800.

Quality – Is it the right kind of light?

After ensuring that there is enough light, sports photographers start thinking next about the quality of the light. Photographers describe light as harsh (with distinct shadows) or soft (with fuzzy shadows). In a gym with mercury- or sodium-vapor lights shining down from overhead, basketball is plagued with harsh light.

Without supplemental lights, it is nearly impossible to do anything about the harshness of the light in school gyms.

Further, in most high school gyms, not only is it harsh and dim, it is not daylight balanced. In professional and even collegiate arenas, the lights are daylight balanced for television cameras. Still photographers benefit from this by being able to shoot like they would shoot outside in sunlight. But the less-expensive lights in school gyms are too yellow or too pink or too something, often rendering jerseys as bizarre shades of the actual color even when photographers take time to white balance.

However, photographers can do something about pictures with a color cast. Take time to white balance either using one of the pre-set modes such as fluorescent, cloudy, tungsten or manual white balance. The few minutes that it takes to accurately white balance while shooting pictures will save hours of after-the-fact color correcting. Get to the game early and see what setting provides the truest colors. Higher-end digital SLR cameras even allow for manual white-balancing, allowing the photographer to define what should appear as white in the images. Television photographers have been doing this for years, carrying a white card (or piece of paper) for white balancing.

Direction – Where is the light source?

Front-lighting is cliché. Light from a direct flash, for example, results in flat images with no depth. Since on-camera flash often is not allowed during a basketball game, front lighting is usually only a problem when television cameras use on-camera lights during post-game press conferences or interviews on the court right after the game.

Backlighting – light behind the subject – results in silhouettes with little facial detail, and hence images that are only rarely suitable for publication. When shooting basketball, backlighting from overhead arena lights is sometimes a problem for photographers sitting on the floor. Photographers should position themselves to avoid backlighting when shooting action.

Side-lighting, like light from a window, gives the subject texture. Side-lighting can make even a brick wall look interesting. The lighting provided by windows or mounted lights in a basketball court provide a diffused form of side-lighting.

Light from below, which rarely appears in nature, makes people look evil and unnatural.

Light from above, like the light on a basketball court or outside at mid-day, gives a subject dark eyes and facial shadow. When shooting basketball, photographers often wait until the players look up a little, often following the ball, to provide more light on their face. Photographers can get some unique shots by mounting a camera above the basket and firing it with a remote to capture the players as they dunk the ball into the basket.

Supplemental light – How do you get more?

Not enough of the right kind of light? Provide your own.

Professionals shooting basketball, whether it is high school, college or professional, rarely rely on available light; they provide their own.

Perhaps the most cost-effective way of relying solely on available light is by using a flash. Not a pop-up flash like the ones that come with digital point-and-shoot cameras, but the more expensive flashes that have the capability to tilt and rotate and have built-in diffusers. Retailing for at least $500, such flashes make a world of difference when shooting basketball.

The only problem: they cannot be used in collegiate or professional games and are even prohibited in some scholastic situations. Photographers should work with their local athletic directors and coaches before assuming they can use flash. Few athletes find the light from a flash distracting.

A better solution, and the one used at all professional and collegiate arenas, is mounted lights. The most expensive lights are built-in to the arena and photographers work with local officials to share time using the lights with other photographers. But scholastic photographers can also set up remote lights on stands around the arena for only a couple hundred dollars. The results can be amazing when compared to shooting in a gym with no supplementary light.

Still, placement of the lights is critical. When setting up light stands or mounting lights, test the direction and quantity of the mounted lights to ensure they provide enough of the right direction of light right at the basket where there is the most action.

Testing before the game is as critical for the photographer as practice is for the player. Photographers need a grasp of the fundamentals of light, paying careful attention to the direction, quantity and quality of the light. Supplementary lights can be just as harsh as overhead arena lights, providing awkward shadow. However, if balanced with the available light, supplemental lights can fill the shadows, allowing the photographer to use faster shutter speeds and result in print-worthy images.

5 Responses to “Let there be light on basketball”

I would like to reciene a free camera for this type of events for excellent quailty pictures for our school yearbook, we are in necessity for our school, please and thank you.

What kills me about high school gyms is when the light bulbs burn out… and they never get changed. Arg! It doesn’t affect the overall ambient that much, but you sure do notice when a player moves underneath a dead bulb and your picture is suddenly a bit underexposed.

Thank you for this article! We always have difficulty knowing how to set the camera for these pictures.

December 08, 2017 at 8:21 am, Newest Photo Spotlight looks at photography in the gym » School Yearbooks | Walsworth said:

[…] Read this post from Bradley Wilson, author of the Photojournalism unit of Walsworth’s Yearbook Suite curriculum, which is all about how photogs deal with lighting in gyms during basketball games. […]