You can create an anniversary book that showcases the history of your school while being relevant to this year’s students.

Imagine what the world was like when John F. Kennedy, Franklin D. Roosevelt or even William Howard Taft was president. Yearbook staffs at schools celebrating 50-, 75- or 100-year anniversaries face the challenge of telling the story of this school year while reflecting on the school’s history, life in times past and how the school has become what it is today.

Just like documenting the year is important, covering the milestone also is important, not only to the school, but to the community. That is what Cindy Jorgensen, yearbook adviser at Selah High School in Selah, Wash., said she discovered as her staff created the 2011 Fruitspur, marking the 100th anniversary of the school.

“Many people were interested and excited to contribute to the book and wanted to share their stories,” Jorgensen said.

Mary Beth Lee, adviser of The Raider yearbook at Rider High School in Wichita Falls, Texas, said the school’s 50th anniversary made the importance of the yearbook clear.

“Fifty years doesn’t seem like that long of a time until you sit down and go through the books from the beginning,” Lee said. “The yearbook captures that history in a way nothing else can. The yearbook is Rider, or at least the Rider that lasts forever.”

“It is our responsibility to document the important milestones the school achieves and 40 years as an independent school is important,” Tracey Vanneste, adviser of the Eyry yearbook at Charlotte Latin School in Charlotte, N.C., said.

All three advisers agreed that to properly cover a big anniversary, the research work needs to start early.

“The entire year before the anniversary was spent locating past yearbooks, collecting and scanning them. Yearbooks were found in the high school counseling office, school library, district office, town library, and a spreadsheet was created to keep book locations organized,” Jorgensen said.

“Then we made a list of the remaining missing books and put an ad in our local newspaper requesting those; this also provided us interview candidates,” she said.

At Rider High School, old yearbooks were perused for information, but the staff had to change their approach to that.

“When we first started, every page team was responsible for their own 50-year coverage, but after our first mini-deadline, we realized that wasn’t going to work. The old yearbooks were being damaged because of use. We realized we had multiple teams doing the same work over and over, which wasn’t very efficient,” Lee said.

“The editors asked one staffer to take over the 50-year sidebars. That staffer spent months going through all the yearbooks, marking them with color-coded sticky notes to coincide with our ladder for coverage, taking photos of the work in the old books, and putting it on the pages,” Lee said.

While the approach to gathering the historical information was about the same, from there, these three schools chose different ways to present it to their readers. 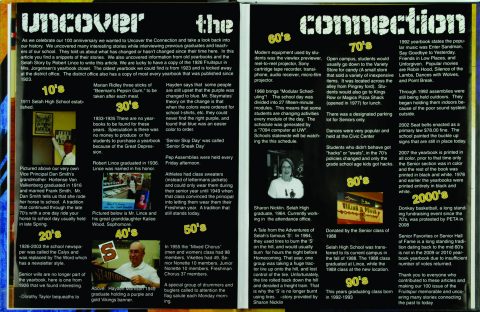 The gatefold in the 2011 Selah High yearbook appears between pages 6 and 7. The two-page spread, “Uncover the Connection, breaks down the school’s history by decade (Vice Principal Dan Smith’s grandmother rode a horse to school in the first decade). The spread following the gatefold has a timeline of the building of all the buildings housing Selah High.

“The staff wanted to honor the past but not put too much emphasis on the anniversary, focusing a majority on the book on the current year’s students,” Jorgensen said.

Most of the 100th anniversary coverage was placed in a gatefold. The front two pages were a spread with interesting information about the school from each decade. The opened four-page gatefold shows most of the yearbooks the staff could find, with a short history of the Fruitspur yearbook. A history of the founding of the school and the building of the buildings occurs on the next spread.

The theme for 2011, “uncover the connection” enabled the staff to connect the past with the present by using a theme-related photo and caption on many spreads, Jorgensen said.

To come up with the “uncover the connection” features in many of the spreads, students were required to look at old yearbooks and make a connection from the past to someone who was currently attending or working at the school. 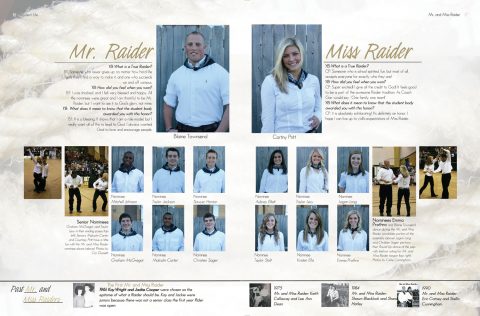 Like the staff at Selah High School, the Rider staff did not want their 50th anniversary coverage to overshadow this year.

“The editors came up with the theme “Perpetual Motion” to show that even though we’re Rider, the students are always moving forward,” Lee said.

The 50th anniversary is noted on the cover, with those words in Extreme Gold hot foil in a small cursive font to match the larger theme words, “Perpetual Motion.”

Inside The Raider yearbook, the anniversary coverage was run across the bottom of most pages and in some of the sidebars, Lee said. Placement of past and current coverage was based on their ladder, so it was incorporated seamlessly into the book.

In covering the 40th anniversary, Vanneste said the 2011 Eyry staff wanted to look at what had changed and what had stayed the same.

“They decided to interview faculty and staff who had been at the school a significant number of years and ask questions revolving around ‘then and now’ and major changes that these people had seen,” Vanneste said. 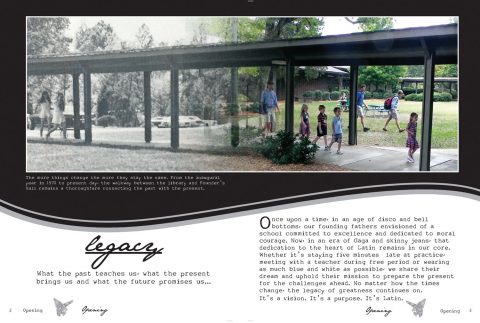 The staff used black-and-white images on their theme pages with similar or posed photos of the present. This opening spread shows how the walkway between the library and Founders Hall has not changed much in 40 years by merging a photo of it in 1970 with one of it today.

Using the theme, “Legacy,” the editors wanted to create a yearbook that looked classy and spoke to the traditional nature of the school, Vanneste said.

The matte lamination cover has a quarterbound look, with sculptured debossing of fingerprints and handprints signifying the idea that all students – former, current and future – somehow leave their mark on the school. The graining and matte silver foil add to the classy look.

Vanneste said the sectional approach to their yearbook worked well in covering the anniversary because the staff was able to look through past yearbooks and use certain pictures appropriate to each section. The staff was fortunate in that the school had an extensive archive to search.