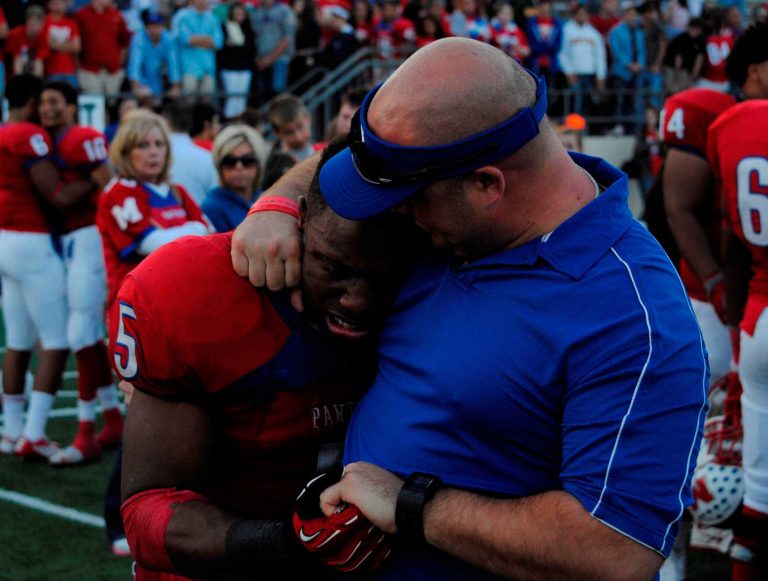 Feature and portrait images are a staple in yearbooks, and Walsworth’s 2013 Photo Contest received hundreds of amazing submissions in the Feature/Portrait category. When it came down to determining the winner, the top image was one that packed an emotional punch.

Congratulations to Nathan Jaquith from Midway High School in Waco, Texas, whose photo capturing a football player being consoled by a coach was chosen the winner in Feature/Portrait.

According to Nathan’s description, the player, B.J. Kelly, was being consoled “after losing the game that would have let Midway move on to the last game of state.”

Nathan wins a $100 Visa gift card for his photo and a pizza party for the Midway staff.

The best photos were chosen by Walsworth and the number of Likes on Facebook. Winners were selected by a committee of judges based on the following criteria: quality of photo (25%), appropriateness to category (10%), photography rules followed (25%), creativity demonstrated (15%) and viral nature as determined by the number of Likes (25%).

I am very proud of Nathan and the skill he has developed turning photographs into artwork in a number of categories.

Congratulations to all of the wonderful pictures displayed. They were great!

Congratulations! What a wonderfully, compassionate picture Nathan….Awesome!! We are not surprised that you won. You have done such wonderful story telling with your pictures. We are so proud of what you’ve become and I know that with God’s guidance, you will go far. Prayers for your future.

Way to go Nathan! Great picture and a great job! Looking forward to seeing more of your work.