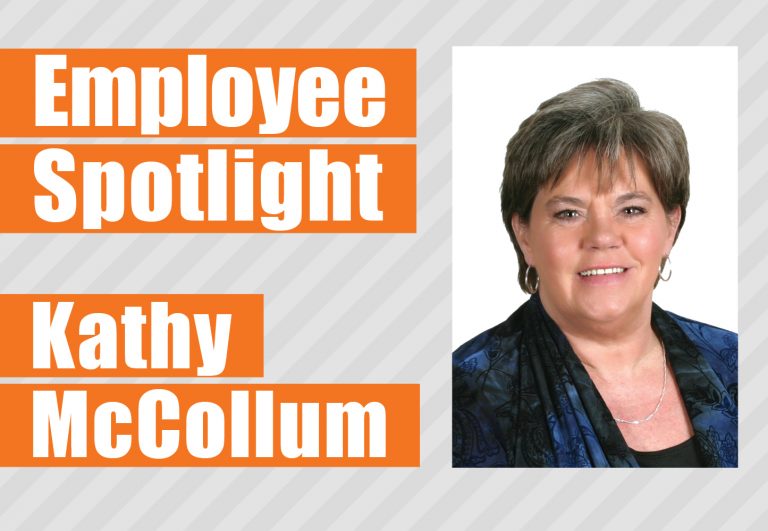 Kathy McCollum has a boisterous laugh, which frequently bubbles out as she talks. She describes herself as a people person and a talker, and that certainly held true during our interview. She’s easy to talk to, and it’s evident that she’s well suited for her job as a Customer Service Representative (CSR).

She was brave enough to be the first employee in our new Employee Spotlight series. She took time to answer some questions about her life, with Walsworth and outside our walls.

How long have you been with Walsworth?

Have you been a CSR the whole time?

No, I originally started in the four-color layout department. I used to work in what was known as cottage work. I worked at home, back in the day when we used to strip layouts for the Color, black and white layout and mounting departments.  We were paid piece rate. It was a lot of work at certain times of the year, but you worked at your own pace. I worked for both the commercial and yearbook departments. It was worth it if you had children; you could be home with them during the summer months when they were out of school. I started working in the plant in 1989 and I’ve been here ever since.

I was an assistant and then I transferred into this CSR position.

I always tell everybody I’m going to die here because I love it. I love my customers. I’m really close with some of them too.

Do you have many customers you’ve been working with for a long time?

I have worked with the West Coast area since I first started as a CSR. One in particular — I have one adviser whom I have worked with from the beginning. We are close friends. I have stayed in her home a couple times. She will be retiring this year, and I am going to miss her. I currently work with the West Coast, Montana, Wyoming, South Dakota, Oklahoma and Illinois schools.

So you’ve really been able to build relationships with them?

Yes, and I do have a couple of close friends. In fact, I used to — when I would go to the San Diego workshop, I would take a couple of extra days and stay at my adviser’s house.

It’s really nice. You get to know someone. It makes a better working relationship. I think they are more comfortable if you get to know them.

Do you still get to see these people at workshops?

Every July, yes. There’s a workshop in the Orange County area, and we normally have about 300 or 400 kids there; sometimes a little more than that. We call it the SoCal workshop.

I’m not sure how many actual schools are there. For example, West Covina has several students who attend. Some schools bring quite a few students, some don’t bring as many and some are advisers only; but it is, in my opinion, a really good workshop.

The West Covina adviser. She’s become one of my good friends, too.

It’s great that you’ve been able to transcend the working relationship and become friends.

It is. I’ve had someone invite me up to their cabin, in Montana. The former Butte High School Adviser, Diana Kujawa. She told me to call anytime I want to come up. She and her husband have a cabin by the lake, and I am welcome to come stay there and we can go fishing.

It is. And I bet that doesn’t happen everywhere.

I’m a people person. My kids are always like, “Mom, you know everybody.”

Well, yeah. How else are you going to meet people if you don’t talk to them? I talk to everyone!

Do you have any great stories about working with customers?

Just the everyday. Helping them out.

I do have a story with Windsor High School [in Windsor, California]. The adviser, Dave Beal, had a student who was blind. He wanted to make her senior year special. I downloaded all of his PDF files for his yearbook and sent them to him. He sent that off and had a braille yearbook made for her. I thought that was really nice.

And then, with the fires this year in California, most of Cardinal Newman High School and surrounding homes in Santa Rosa burned down. Our company pulled the yearbook files from the past four or five years, and printed 75 copies of each book to replace the yearbooks for students who lost theirs in the fires.

Let’s talk a little bit about your family. You have kids?

I have three girls and a boy. My oldest daughter is the administrator at one of the prisons in Cameron, Missouri. She has two children.

My son owns his own car-hauling semi. He hauls cars all over the United States. He has one son.

My other daughter works for Federated Insurance in Minnesota. She has one child.

My baby, she’s 36 and she has one child. She works at the dermatology clinic in Columbia, Missouri.

So five grandkids. My oldest grandchild works in Kansas City, at Cerner, and I have a great-granddog!

Well, I like to sew, but I don’t sew a lot anymore because I don’t have a lot of time during the winter, and that’s the best time to sew! I like to swim. I like to side-by-side ride.

I like to garden; I love flowers. My mother has the greenest thumb in the world. I love being out in the yard. I’d rather be outside working in the yard than stuck in the house.

My favorite singers are Alan Jackson and Conway Twitty. Alan was born on my birthday. I always say he was my birthday present when I was two. That’s like a joke with me and my kids! I’ve seen him three times.

My favorite place so far is Jamaica. I love it. I think I could live there, but I’ve not been to Hawaii yet.

I like to travel. I love going to California for my workshop.

Any other cool places you’ve been?

I’ve been on a cruise to the Bahamas. We went to Freeport and Nassau. That was fun.

I think our next trip, we’ve been talking about going to Eureka Springs, Arkansas.

Every year, Jim and I – he’s my significant other of 16 years – we go to Branson or Eureka Springs or somewhere and just drive around. He likes to trout fish, and when we’re not fishing, we’re driving around looking for different things to do. Going to different shows and just relaxing.

How did you and Jim meet?

His stepmom worked here at Walsworth, and one day, I saw a picture of him. And I said, “Oh my! Who’s that?”

So she introduced me to him!

His first wife had passed away, so he wasn’t married, and I wasn’t either. We met and we’ve been together ever since!

And he’s got three kids and ten grandkids, so we have 15 grandkids all together.

Do you all get together very often?

Every Thanksgiving and Christmas. And I’m telling you, we don’t have a big enough house.

Seven kids and 15 grandkids. And, they all get along well, so it’s good.