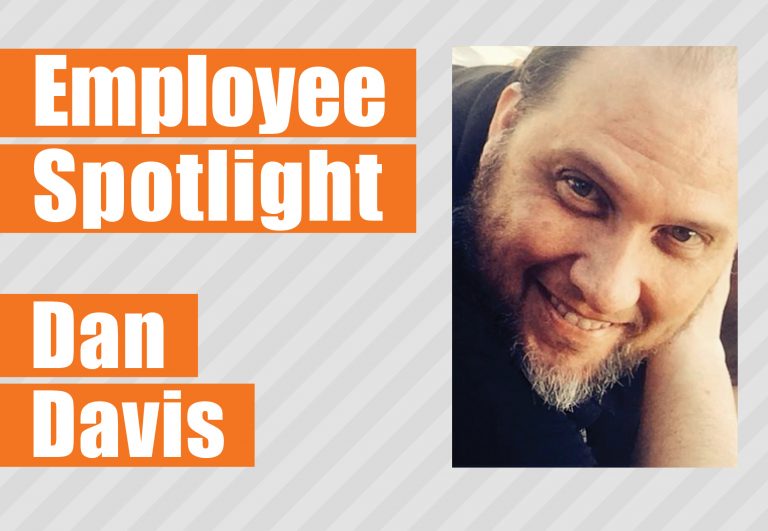 Dan Davis celebrates his 23rd anniversary with Walsworth on June 18. The Creative Services graphic designer is something of a Renaissance man. He can easily talk about books, movies and, of course, design. He shared a little bit about his life, both in his role as a graphic designer at Walsworth and his hobbies outside these walls.

Tell me a little bit about what you do on a daily basis.

It’s a varied job. There’s a lot of different things to do, but mostly covers and endsheets. We do a lot of designing and we put the covers and stuff together using graphic design. We use those skills to create something artistic that’s designed well.

You work closely with the schools, correct?

Yes we do. We’ll travel to workshops all over the country. We also do virtual sessions. Those have really taken off in the last 10 years or so.

We’ll be at our office here in Brookfield, and the schools call in. Usually, they’ve sent us something beforehand so we can prepare something ahead of time. Then, we send a web link to the school so they can see what’s happening on our desktop during the session. Basically, we’re creating custom covers right there in front of their very eyes.

I imagine things have changed since you started at Walsworth in 1995. How has your job evolved?

I was thinking about that recently. I graduated from Savannah College of Art and Design in 1994. I had gone to get my masters in illustration. That’s really where my heart was.

A curious thing happened between my time in college and starting my career. At that time, graphic design really started to shift from being a lot of hand work, to being done more on the computer. So between graduating in 1994 and finding this job in the summer of 1995, I had to really start working on the computer. That’s the way the whole business has gone, too. Now, everything is basically on the computer. Even illustration, most of it is done on the computer now.

Do you miss that hand work at all?

I do a little bit, but I still do some on the side for myself. I like working with gouache, working with paint and drawing. There’s something about the substrate under your hand and bringing it out on a piece of paper or canvas that’s really a different experience. You can emulate it on the computer, but there’s really a tactile quality, there’s the physicality and the whole breadth of it.

Of course, you can’t command Z on a painting.

Do you have a favorite cover you’ve designed?

Hmmm… out of the hundreds and hundreds that I’ve done (laughs).

One for Alta Loma High School stands out. It was a great example of marrying a style to the applications.

To explain, it really takes about a year to learn this job. You start out with something, creatively, but there are many steps that happen before it gets printed. It takes time to learn how something will look when it’s printed versus when it’s being designed. It takes a little time to get that down.

That Alta Loma job is printed on this luminaire linen, which is a fairly recent addition to our stocks. It’s got a pearlescent – and I’m going to use a crossword puzzle word here – nacre, N-A-C-R-E, which is an opalescence. It’s a white linen, so it’s got this beautiful finish anyway, then the material has this pearlescent sheen.

The book has the word “altitude” at the top in a very thin font. The “I” in the word goes down toward the bottom and fades. It almost has this 1930s travel poster feel to it. There’s a blue fade from the top to the midpoint, and there are mountains at the bottom. There’s a lot of space and a lot of openness, but on that pearlescent material, it really came to life and surprised me.

It turned out to be one of my most favorite books in recent years.

There’s another book that I did about 10 years ago, it was for an Alice in Wonderland theme. On the front, it pictures a doorknob and the keyhole is die-cut. It’s a four-color cover with a keyhole cut, and you can see the endsheet through that keyhole.

You can see a table with the “eat me, drink me” cake and bottles from the book. I created the bottle, I created the table, I created everything from the carpet to the details of the wallpaper. It’s one of the first times I’d done an illustration from start to finish on the computer. I really loved and enjoyed that cover.

Most designers have their own individual style. Do you get to exercise that in your department?

There’s a bit of that. Any artist will have that thing happen. It’s your personality and the way it comes through and the work you do. If we laid out five covers on a table, I’m sure my fellow artists could probably walk by and point at the one I did.

One of the reasons that I’ve stayed with Walsworth for 23 years is we do an incredible variety of covers and styles, and different ideas. I do 150 covers a year, so we really get to cover a lot, from the fairly simple to the over-the-top. The breadth and variety of what we get to do is a great part of the job.

Personally, I like busy stuff. I like layers, and texture, and I like a thick feel to something. Then at other times, I like a light, spacious, almost Japanese print kind of sensibility where everything is balanced in an unusual way.

You mentioned you do illustration at home?

From time to time. I do a lot of doodling, like I’m doing now as we’re talking.

I recently did a piece for a friend. Her daughter is a big Shakespeare fanatic. A couple of years ago, for her birthday, I did a portrait William Shakespeare. It had a curvilinear line, a lot of crosshatching, it was pen and ink, with a lot of shading.

What else do you like to do for fun?

I’m an avid reader. I love movies. I enjoy a good jigsaw puzzle. I recently counted up my puzzles and I’d be embarrassed to tell you how many I have.

Do you have a favorite kind of book or movie?

Oh, gosh. People always ask about my favorite movie. My favorite movie is probably “Bringing Up Baby,” the Katharine Hepburn and Cary Grant movie from the late 1930s. It’s a fantastic comedy and the definition of a screwball comedy. I also like “The Prestige,” and “The Assassination of Jesse James by the Coward Robert Ford.” I enjoy a lot of different movies. It’s the same with music and podcasts. Usually, I say I don’t have a favorite, per se, but I have a lot of different movies that I enjoy.

I have a reading goal of 20 books a year.  It might seem like a modest number. Some people read a heck of a lot more than that, but some people don’t even read 20 books in five years.

I just finished “The Goldfinch” by Donna Tartt. It’s a big thick volume and it was a really good book. Now I’m working my way through Jane Austen’s books. I read Classics, or fantasy, or historical fiction. Just whatever. I like a whole variety of things, but don’t read too much nonfiction.

Do you have family nearby?

I’m the youngest of seven kids. I have a sister who lives in Hannibal and a brother who lives about 10 miles north of her. I have also have siblings in New London and Columbia. We’re kind of scattered but not too far apart.