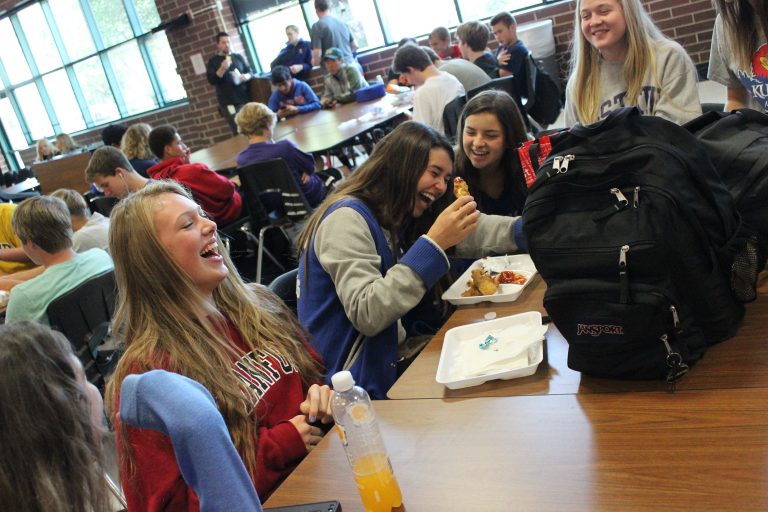 Figuring out new and creative ways to bring in money is an annual goal for many yearbook staffs. After all, yearbook programs need funds to keep making improvements to the book. Some staffs come up with some really fun ideas. Here is a quick look at a few of those ideas that were very successful for the schools involved:

The yearbook staff at Sturgis High School in Sturgis, S.D., took advantage of the exhibitionist streak in some high school boys to effectively raise money.

The staff held a male beauty pageant called the Mr. Irresistible contest. Each student organization in the school was able to nominate one of its members for the faux-pageant. Students were charged $2 for tickets to the event, which was held each spring during a school day in the auditorium. The event soon turned into a laugh riot as the contestants took part in a talent contest, a modeling show and live interviews.

Sturgis yearbook adviser Lesa Krajewski was not quite sure what to think when a transfer student brought the clever idea from another school. However, she did not have to worry for long, as the contest became a huge hit.

“It became a thing that the local community got involved with, and it was really a lot of fun,” said Krajewski. “By the time we got to the third year, there were several guys that got really into it.”

Unfortunately, the Mr. Irresistible contest did not last past its third year after the school’s new principal decided it was not the best use of class time, and the abundance of after-school activities did not make an evening show a practical alternative.

However, the Sturgis staff hung in there. The journalism room is located on a far-off wing of the school’s spread-out campus, which allowed the staff to open and operate its own concession stand. Students with classes on that wing of the school can grab a quick bite to eat away from the main food area, which is located quite a distance away.

Put it on a shirt

Using iron-on transfers with their inkjet printer, the Chino Hills staff printed photos on T-shirts and sold them to students for $10.

Students were given the option of shopping through the staff’s digital archive of photos, or even bringing in their own photos to be scanned. Not only did the shirt sale generate a huge response, it allowed many of the yearbook staff members to hone their craft using PhotoShop.

“It’s the most popular fund-raiser you can do without selling sugar,” joked adviser Tami Davis. “People came out of the woodwork to get these shirts.”

The shirts became especially popular with athletes, and many parents also caught wind of the sale and brought in their own photos.

“It was a very positive experience,” said Davis. “It created a lot of school spirit, it got people into the yearbook room and brought a lot of awareness to all the new digital aspects of yearbook.”

Run for the money

“I thought about it, and figured we should do a race, since I’m out there paying all this money to take part in races,” said Moore.

That is exactly what the New Palestine staff did. Last fall, they organized the fi rst Dragon Dash, a 5K/10K race to raise money. The event included both a walk and a run, as well as a 200-meter dash for children ages 3-7, and a 400-meter dash for ages 8-13.

The registration fee for the race was $15, with $10 going toward race fees. Participants got a Dragon Dash T-shirt and the course finished with a lap around the high school’s track where an audience greeted each runner.

The race generated plenty of community support. The local hospital donated bananas and granola bars, and another company donated bottled water. Around 200 local participants signed up and took part.

The event was a rousing success, even though it took place on a rainy Saturday morning in October. The inclement weather did not dampen the day, and even led to some humorous non-finishes.

“We had a lot of mothers that were doing the walk with their kids in strollers. Once it really started to rain, they just used their cell phones and called people to come pick them up,” laughed Moore. “Others were running right through their own housing additions, so they just stopped and went home without finishing.”

“Everybody’s already asking about it for the second year, so we’re already planning it,” said Moore. “We’ve talked about maybe doing it on Homecoming weekend, or something along those lines.”

Each year, Hebrew High School of New England in West Hartford, Conn., drums up proceeds for the yearbook, despite a total enrollment of around 50 students. The yearbook is produced each year by the senior class, which normally numbers around 15.

This 2005 class organized quite a few fund-raising events that specifically filled a need for the Jewish students and parents. The staff held a large pizza sale with kosher pies.

“At a regular school, nobody would really need to buy pizzas,” said Sara Beth Kaun, the school’s yearbook adviser. “It’s a little bit more difficult with the kosher market. When things like kosher pizzas are provided readily, people really snatch them up.”

The kosher pizza sale was not all. The Hebrew staff also organized a contest for a school T-shirt, where students entered their own design ideas.