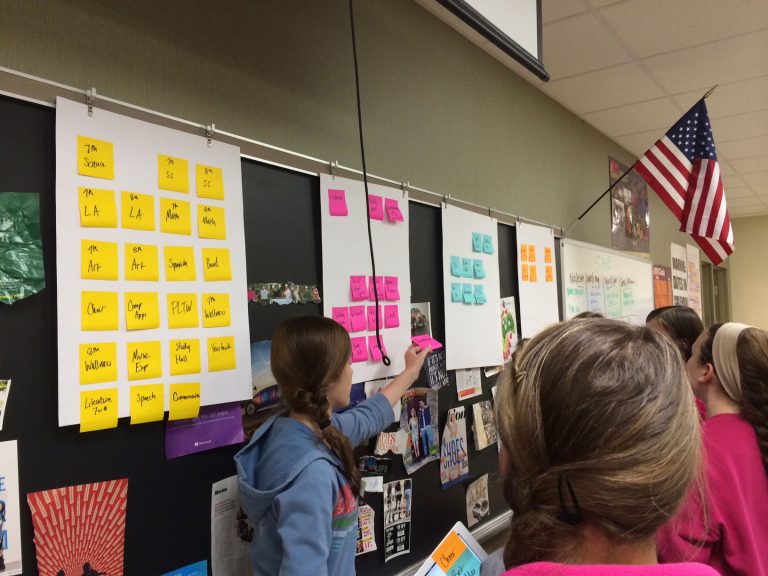 Cover it all with  umbrella coverage

Traditional sectional coverage can get pretty boring after awhile. A chronological book wasn’t a good choice because I have no repeat staff, and we would miss too much of the year with training. Then I found umbrella coverage, which is beginning to challenge chronological coverage in popularity.

Umbrella coverage means the stories placed on each spread are not dictated by traditional topics, but by the theme concept. Stories are mixed together on the same spread, linked by the theme. The connections are endless, and with multiple events covered, the staff is not stuck making an entire spread on something that doesn’t have enough to fill it. My absolute favorite thing about umbrella coverage is that it forces staffers to have a specific angle.

How to use umbrella coverage

For example, a spread using the word “Assist” could cover clubs such as the National Honor Society, Student Organization for Service, Key Club and any other club that “assists” others.

However, I like to challenge my staffers to become super-creative with umbrella coverage, using it as a strategy for organizing the entire book.

The umbrella coverage style must fit with your theme. Concept-based themes work best because you eliminate all the traditional sections (except ads, index and people) and create new sections based on your theme. The spreads within each of these new sections are based on a word, phrase or concept that supports the section and the overall theme.

It starts with your theme and a lot of brainstorming!

For example, the theme for our 2014 book was “Breakthrough.”

To determine sections, we had to ask ourselves a lot of questions:

Which led us to: How do you have a breakthrough?

This led us to these ideas, which became our section names:

To determine what goes in these new sections, we did more brainstorming and came up with spreads with the following titles.

A lot of planning goes into determining what topics go under these words. The adviser and editors should determine what must be covered. For us this list included:

Determine how many topics to have per spread. We decided on a minimum of three in order to fit all of the activities we wanted to feature. Then determine the topic categories, which we called primaries, secondaries and tertiaries.

After more brainstorming exercises, staffers were given two of the topics that would be covered from each traditional section and then they brainstormed words related to that topic.

Beats were assigned; students had to find out what was happening or had happened already, with specific events and details, and add them to a shared document in Google Drive.

Staffers had access to a list of optional words, the beat report document and sticky notes hanging in the front of the room.

After going over the rules and some good and bad examples, staffers paired up and then began looking at the options and coming up with unique ways to tie together events/topics.

They were told to pick three topics/sticky notes, one of them a primary topic; sticky notes had to be different colors; and they had to be specific and have an angle.

How can I get a copy of that brainstorming worksheet?

Allison (Allie) Staub advises The Scrapbook yearbook at Westfield Middle School in Westfield, Ind., where she teaches art and yearbook. In January she received the 2015 JEA Rising Star award. The yearbook has earned numerous state and national honors, including being named a 2015 CSPA Crown Finalist and a 2014 NSPA Pacemaker Finalist for the 2014 yearbook described in this article. A self-proclaimed font snob, she teaches at local and national yearbook workshops.