Celebrate yearbook with a signing party May 25, 2011 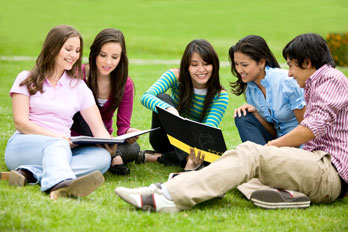 Celebrate yearbook with a signing party

If you have convinced students to buy a yearbook, then make a big deal out of giving it to them.

The yearbook staff has spent months chronicling the school year for their fellow students, who should be as excited to see the finished product as the staff. Build on that enthusiasm to maintain awareness of the yearbook by hosting a distribution signing party.

Students who buy yearbooks want to see photos of themselves and their friends. A signing party lets students share the experience of seeing the photos for the first time and makes it easier to get signatures. Add music, and it will be an event your school will look forward to each year.

Consider the yearbook program’s needs when thinking about your signing party. You can use it as a fundraiser, or to sell next year’s yearbook, or just to have fun. As the first step, get your administration’s approval. Then start planning the fun two to three months before your delivery date.

Use the ideas here to get your staff talking about how you can do a distribution signing party.

Being a senior has its privileges when it comes to getting the Birmingham High School yearbook. The yearbook signing party at the school in Van Nuys, Calif., is one of the senior events. At the Senior Sign and Dine, only seniors can come and pick up their yearbooks and exchange autographs. Cake, ice cream and soda are paid for by the senior class, Lew Berns, adviser, said.

Any senior can attend, whether they have purchased a yearbook or want to buy one. The remaining yearbooks are distributed to the underclassmen the next week.

The event is from 2:30-4:30 p.m. in the covered lunch area outdoors. Usually about 80% of the seniors who purchased yearbooks attend, although Berns said he wondered if attendance would drop this year since it will be on a Friday – May 13.

The yearbook staff at Gahr High School in Cerritos, Calif., uses their yearbook preview party to raise some money. Students have to buy a ticket to get in, at about $3, and once there, they can purchase autograph pages, clear plastic book protectors, and their name written in their book by a teacher who does calligraphy. If food is offered, it’s included in the ticket price.

“That is left up to the staff for that year to decide if they want to have food or not,” Kimberly Suzuki, adviser at Gahr in Cerritos, Calif., said. “Some staffs worry that the books might get dirty.”

The party is scheduled for late May or early June so that students have about two weeks before school is out to get their books signed.

“Anyone who goes to the signing party gets to see the yearbook a week earlier than the rest of the students,” Suzuki said. “Last year we sold out of the yearbook at the preview party.”

At Burke County High School in Waynesboro, Ga., only students who have purchased a book can come to the signing party, Jessica Brantley, adviser, said.

The staff makes handmade invitations and gives them to students a day or two before the event. Brantley said this encourages book sales before the party. Most of the students who purchased a yearbook come to the party, she said.

Book sales begin again the day after the party, selling for $10 more than the previous price.

Burke County’s distribution day is during the last week in May, during 7th hour (the second to last period of the day) in the auditorium. To prepare for it, Brantley’s staff is released from class around second or third hour.

While the time, date, place and procedure are usually the same, the staff likes to change it up a little each year. This year, they plan to have the campus security officer get each staff member from class, starting a rumor that there is a problem with the yearbooks and no one will be getting them. Brantley said this should prod students to want to find out what’s going on when they are released 7th hour. Once they are all in the auditorium, campus security will escort the staff in with the books, and the party begins.

“I like the idea of getting campus security to do it. Talk goes around fast at our school,” Brantley said.

Not just for spring

Some schools have their distribution signing parties in the late summer or in the fall, whenever their book is delivered. Saint James School in Montgomery, Ala., has a tradition of distributing its yearbook on a day called Iliad Day. It takes place on a Friday afternoon at the end of the school day within the first few weeks of the school year.

Iliad Day is just a fun time for the students to get together on the quad and enjoy their yearbooks, since yearbooks are included in the school’s tuition price.

The staff eats lunch together, then mans the distribution tables to give all the middle school and high school students their books at the event.

“Then for the next hour or so, students congregate on the quad reading the yearbook, signing each other’s books, admiring pictures, and listening to music (selected by the staff),” Clinton said.

The seniors are welcome to come back on Iliad Day. Clinton said a few graduates do, but most have their friends or parents pick up their books, or they stop in sometime during the year when they are in town.

One Response to “Celebrate yearbook with a signing party”

[…] Many schools make sure that distribution day is a party and a “big event” that draws a crowd. There are various ways you can promote the day with a signing party, and this post provides some examples of how schools have done it. […]