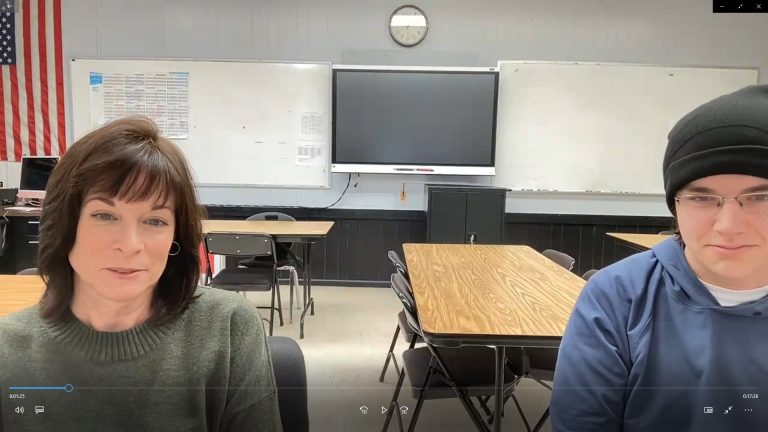 The yearbook staff at Oak Forest Academy in Amite, Louisiana, will be finishing their 2022 yearbook on all-new equipment thanks to a $30,000 donation to the program. The donors remained anonymous and are referred to as Secret Santas. Their gift has allowed the journalism program to upgrade to state-of-the art equipment.

“When I was told I was just like, ‘What?’ It was shocking. It was almost too good to believe,” Golden Oak adviser Kari Wheeler said.

Junior Andrew Pray is a staff photographer and also contributes with his technology know-how. This is his first official year on staff, but he’s been aiding the program for years – including building a computer for them as a freshman.

“Before we got the new iMacs, they just had a bunch of old computers,” he said.

“Ragtag,” chimed in Wheeler. “We were kind of patching it together every year with very slow, ancient computers, trying to squeeze out everything we could from them. And it was oftentimes frustrating for my students because [the equipment] was slow and unpredictable and unreliable.”

The yearbook staff was familiar with the problems caused by crashes and programs freezing – which made the challenge of meeting deadlines all the more difficult.

“We really think productivity is going to skyrocket,” Wheeler said. She thinks the staff will be more on-task if they’re not waiting for programs to load. She also expects the new lab will make it easier to recruit a new staff.

After learning about the donation, Wheeler and staff members sat down to discuss what the program needed most with the allotted funds, which were distributed in increments.

“We would put together a TikTok video each time we had a significant amount, then we’d send it out to the students right before class started so they could get excited,” Wheeler explained. “Their minds were blown. They were all running into the classroom every time a TikTok went out, to see what was new.”

Pray listed the new equipment they’ve purchased with the funds. They bought 10 new Apple iMacs – nine for the students and one for Wheeler – and new tables and chairs.

“Before, everyone was just a little too squeezed in, so there were issues with people horsing around or whatnot and not focusing on their work,” Pray said about the tables. Their old chairs “were just a hodge-podge. And some of them were bad about falling or flipping.”

They also got a new cabinet that allows them to organize and charge their photography equipment as well as  store their newly purchased Canon cameras and lenses that make it easier to shoot sporting events. The equipment is kept secure with wireless security cameras and a fingerprint-enabled door lock.

“One issue that we had before was I would have a camera that I needed to bring back, but [Mrs. Wheeler] would have already left, so I was locked out,” Pray explained. “So now the yearbook staff now has easier access to get in and it’s also more secure.”

One of Pray’s favorite purchases was the new server, which allows them to save all their photos and easily access them. Before the new server, they frequently faced storage shortages.

Wheeler and Pray report the staff has been happy and excited with the upgrades. They only set up the last of the new equipment in the last week before winter break, so they’ll be able to jump into the new semester full steam ahead.

The donors passed on a message about their gift: The Golden Oak has been an invaluable part of Oak Forest student life for decades. The skills and talents they develop will have lifelong benefits for the yearbook staff, from photography and editing to ad sales. As tech has become more essential in today’s world, we hope we’ve set Ms. Kari and the yearbook staff up for many more years of success.

Wheeler wanted to thank the donors from the bottom of her heart.

“Most of your donations to private schools usually go to athletics, so the fact that they decided to bless an academic program – not just right now but for years down the road – it’s so significant, important, and I couldn’t say thank you enough.”